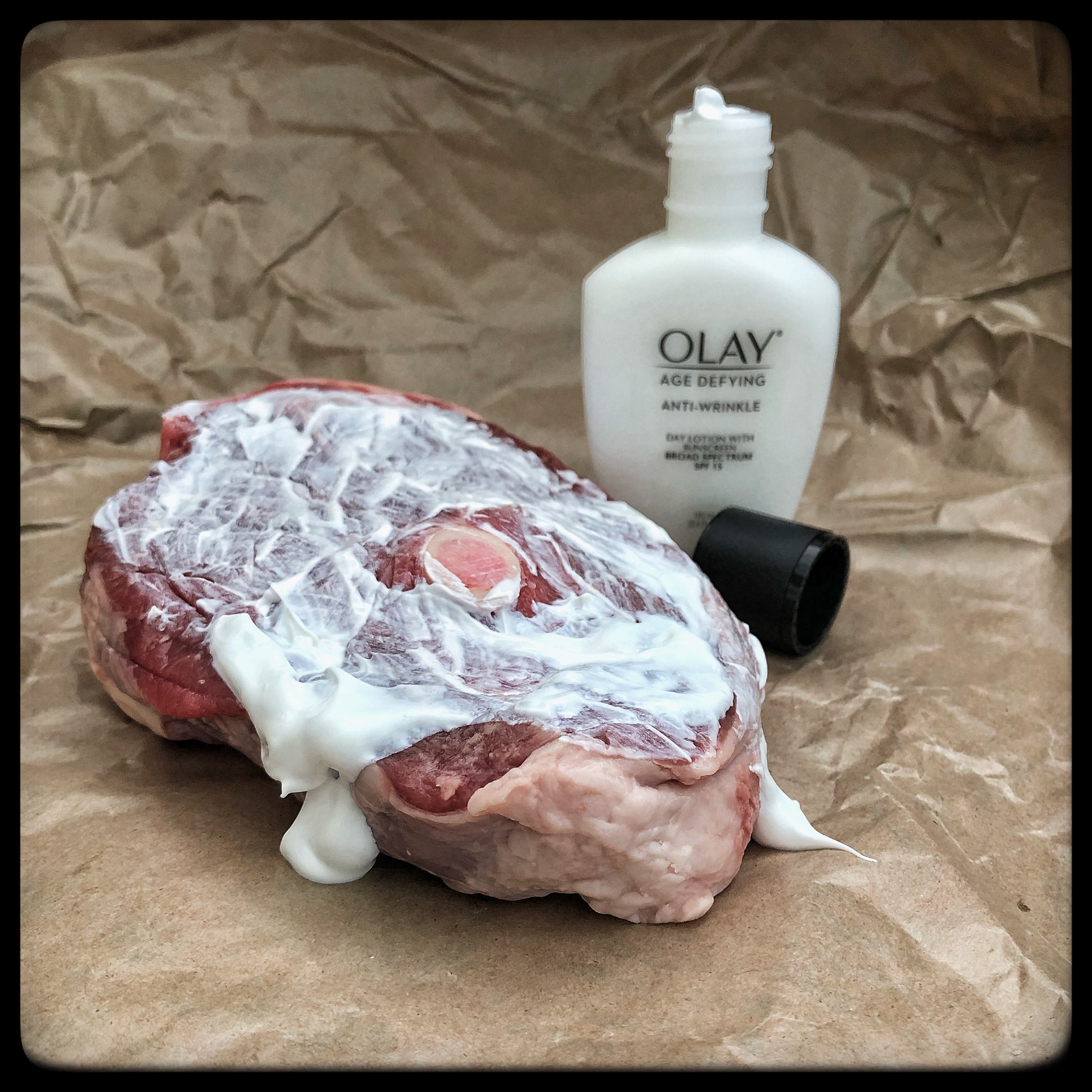 I never expected to be this old, really. Fifty. Fifty. It’s such an important-sounding number.

It’s the exact number of dollars Holly Golightly requires for the powder room. It’s how many Nifty United States my brother coughed through in a live Salute to America pageant recording. It’s how many shades of grey the author of a poorly researched sex novel thinks there are. It’s the sum total of ways Paul Simon suggest you can leave your lover. It is a figure so significant that people whose marriages miraculously last that long receive presents made of gold. Gold.

To celebrate this milestone, I thought I would make Mutton Dressed as Lamb. I hadn’t the faintest idea what the recipe would be, but I thought the idea was appropriate for a middle-aged writer who still prefers wearing short pants. I Googled “where to buy mutton in SF” but was directed to places that only sold lamb. I widened my search, thinking I could mail order some from slightly further afield, but I am not at all comfortable buying meat from the UK unless I am actually present in the UK to eat it. My internet probing was disheartening. Perhaps I could special order it from my local butcher shop?

I called Bryan’s Quality Meats and chatted with one of the butchers. They do special orders. They have sweetbreads pre-packaged in their refrigerator case, so the idea didn’t seem too farfetched. “Mutton? Hmmm…” the gentleman on the other end said. I imagined him stroking his chin with his non-phone hand as he considered my request. “We don’t carry it. I’ll bet you could special order it with somebody who raises lamb, but that would probably mean committing to buying a whole sheep.” I expressed my disappointment and thanked him for his time and then he added, “People like their lamb young. When it gets old, nobody seems to want it anymore.” When I hung up the phone, I was suddenly depressed. More depressed than usual, that is.

“When it gets old, nobody wants it anymore” kept running through my head and I didn’t much care for it. I hadn’t been too worried about hitting the half-century mark until that moment. I wasn’t what you might call looking forward to it either– I’m not exactly sweet on birthdays. I hide my natal day information of Facebook because I don’t want three hundred people wishing me well. It makes my homepage so untidy. I get uncomfortable when people other than my father and stepmother sing “Happy Birthday” to me because it means I have to sit there and take it and I don’t know what to do with myself for the 17 seconds it takes for everyone to get through the lyrics. I die a little when it happens in restaurants. I prefer a small, quiet celebration spent with a few people who know it’s my birthday without a major social media platform having to tell them. And after that phone call to the butcher I just felt like a pile of old meat that nobody wanted.

I was being pathetic and I knew it. Old meat. Perhaps I am now old meat, but apart from a bit of grey hair, I think I’m doing alright. I recalled one of my favorite quotes regarding aging from Jeanne Calmet, the world’s oldest woman, on the occasion of her 110th birthday: “I’ve got only one wrinkle, and I’m sitting on it.” Except I imagine she said it in French. The act of conjuring that mental image always seems to cheer me up.

Old meat. What, pray, is wrong with old meat? Don’t people like their steaks aged? Aren’t pheasants hung in dark places to quietly rot in peace? And let us not forget our porcine products: Jamón Ibérico, Speck, and Serrano Ham are highly desirable. And very expensive.

I suppose it’s all a matter of perspective, really. Fresh meat has its own pleasures to be sure, but I am well past the spring chicken stage. Younger, tender viands lack complexity, and often rely on older, more experienced meats to help them along. It’s the prosciutto  that makes a Saltimbocca jump in the mouth, after all, not the veal.

The more, I think about old meat, the better I feel about it. But I am done for now. I’m going outside for a little fresh air. The fresh lamb steak I reluctantly bought instead of what I really wanted will be wrapped up tightly and put in the freezer. Do you think perhaps in a year or two it will have aged into something better? Probably not– no matter how hard you might try, you can never really get away with dressing up lamb and passing it off as mutton.

I write about food and am very fond of Edward Gorey. And gin.
View all posts by Michael Procopio →
This entry was posted in Meatness, Rants and Stories and tagged Aging, lamb, mutton, old meat. Bookmark the permalink.