I’d originally thought to make a foul, rust-colored dump cake to mock the most divisive political figure to come around in my lifetime, but both the idea and the recipe made me rather unwell. As I prepared and baked off the layers of canned mandarin oranges, sweet potato baby food, and white cake mix, I found myself not only getting sick to my stomach at the thought of having to eat the nasty thing, but angry at its monstrous, little-handed muse.  The longer it cooled on the counter, the hotter my blood seemed to boil.

My rapid increase in body temperature was most likely due to a rather unpleasant and persistent bout of influenza, but the timing of my illness was uncanny.

Every time I dragged myself into the kitchen to get a glass of water or some juice, that revolting orange-tinted baby seemed to stare at me from its place on the counter where I’d abandoned it, demanding my attention. After two days, I summoned enough energy to throw a towel over it and move it some place less conspicuous, reasoning that I’d figure out what to do with it when I felt a bit better. After five days, I’d figured it out– I scooped it into the garbage can where both it and its inspiration have always belonged.

I had spent several days in bed watching news clips and reading articles about this awful man, feeling increasingly helpless in my weakened state and had finally had enough. Even if it was just a disgusting, sugary effigy, it felt immensely satisfying to escort its slimy bottom from my favorite Pyrex dish (which was then thoroughly scrubbed and soaked in bleach) and usher it, sheathed in its own, private bin liner, out the back door and down the trash chute.

Crawling back into bed, I decided that, rather than obsess over the awful news posted in my Facebook feed, I’d console myself with more light-hearted fare, like a marathon of the British comedy quiz show QI. As I listened, eyes closed and half-dozing, I could have sworn I’d heard Stephen Fry say something about America’s former motto, “E Pluribus Unum,” having originated from a recipe for salad dressing. Curious, but rather opiated from NyQuil, I jumped the video back a few seconds to make certain I didn’t dream it.

“Out of many, one”. How marvelous, I thought, that the aspirational dreams of the United States were once inspired by an Italian vinaigrette. I promised myself I would look into it as soon as I regained full consciousness.

The phrase “E Pluribus Unum” comes from the poem Moretum, for centuries attributed to that bane of schoolboy Latin, Virgil. In it, he (or whoever actually wrote it– no one is certain) describes the making of a meal by a poor farmer named Simylus as he sings and talks with his African slave, Scybale*. 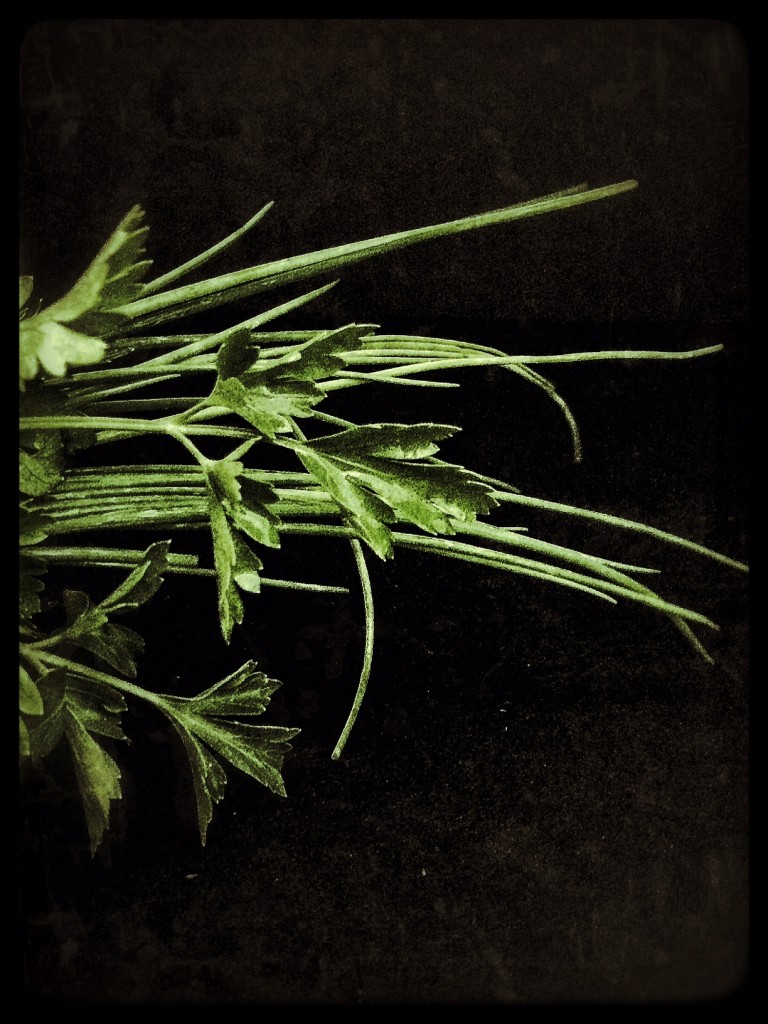 In preparation, there is the gathering of what reads like salad fixings:

The ruddy onion, and a bed of leek
-For cutting, hunger doth for him subdue-,
And cress which screws one’s face with acrid bite,
And endive, and the colewort which recalls
The lagging wish for sexual delights.

He then pulls up a garlic bulb from his garden to make a dressing, to which he adds parsley, coriander seeds, salt, cheese, and “stiffness-causing rue”.

The bulb preserved from th’ plant in water doth
He rinse, and throw it into th’ hollow stone.
On these he sprinkles grains of salt, and cheese
Is added, hard from taking up the salt.
Th’ aforesaid herbs he now doth introduce
And with his left hand ‘neath his hairy groin
Supports his garment;’ with his right he first
The reeking garlic with the pestle breaks,
Then everything he equally doth rub
I’ th’ mingled juice. His hand in circles move:
Till by degrees they one by one do lose
Their proper powers, and out of many comes
A single colour, not entirely green
Because the milky fragments this forbid,
Nor showing white as from the milk because
That colour’s altered by so many herbs.

To this now-unified mix he adds olive oil, vinegar, and then hopefully washes his hands after touching his hairy groin.

In the meantime, Scybale has occupied himself by baking bread and sharing it with Simylus, the poet going so far as to note that Scybale, at least, has bothered to wipe his hands. They eat what they have made for lunch and then get back to work. The end.

It isn’t what I would call an exciting work, but it is evocative. The poem is pungent with sweat and salt and garlic and groins. And the dressing is no less so. 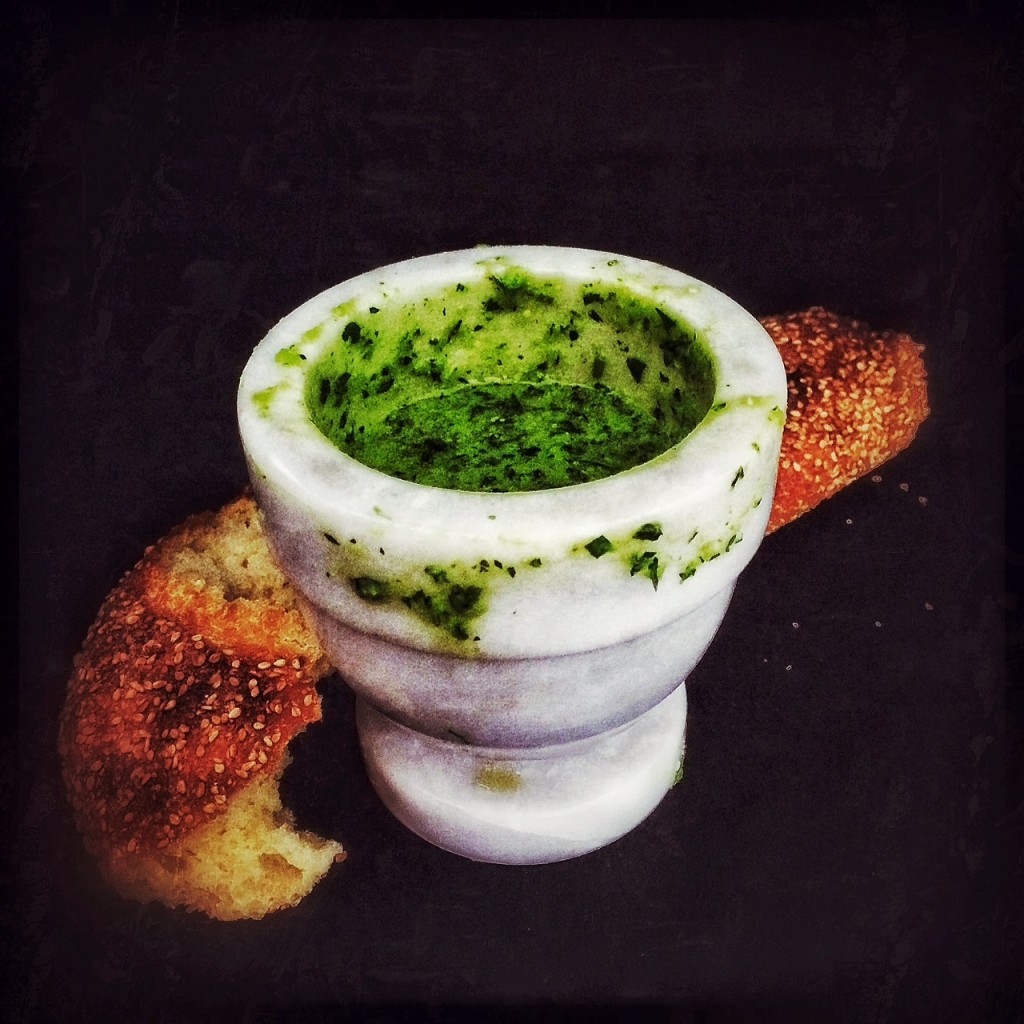 I imagine you could also call it “Virgil’s Vinaigrette”, depending upon how much oil is added, even though I am fairly certain that Virgil created neither the recipe nor the poem and, judging from its ingredients, it reads (and tastes) more like a pesto than a salad dressing but, like Latin translations, all things are open to interpretation. Besides, I couldn’t come up with a better name than E Pluribus Pesto— I’m still somewhat medicated.

Whatever you decide to call it, I hope you will make it, if only because you like the idea that it in part inspired a beautiful sentiment– one of inclusion and unity and working together. I think we could all use a bit more of that in our lives.

And it’s infinitely more satisfying than trying to make a shitty  Dump Cake any day of the week.

I’ve come up with something that closely approximates what was made in the poem, minus the “stiffness-causing rue”, because it is rather out of fashion as an ingredient and sadly unavailable here in San Francisco. I find this rather disappointing, since it is said to improve the eyesight and dissipate flatulence, according to medieval herbalists.

Makes enough dressing/pesto/condiment/what-have-you to consume with a friend over a freshly baked loaf of bread.

*The fact that our Founding Fathers plucked a quote from a poem about a farmer with an African slave seems depressingly apt.

I write about food and am very fond of Edward Gorey. And gin.
View all posts by Michael Procopio →
This entry was posted in Rants and Stories, Savories and tagged e pluribus unum, elections, Garlic, hairy groins, pesto, virgil. Bookmark the permalink.