Sand in My Pants

Posted on September 7, 2015 by Michael Procopio 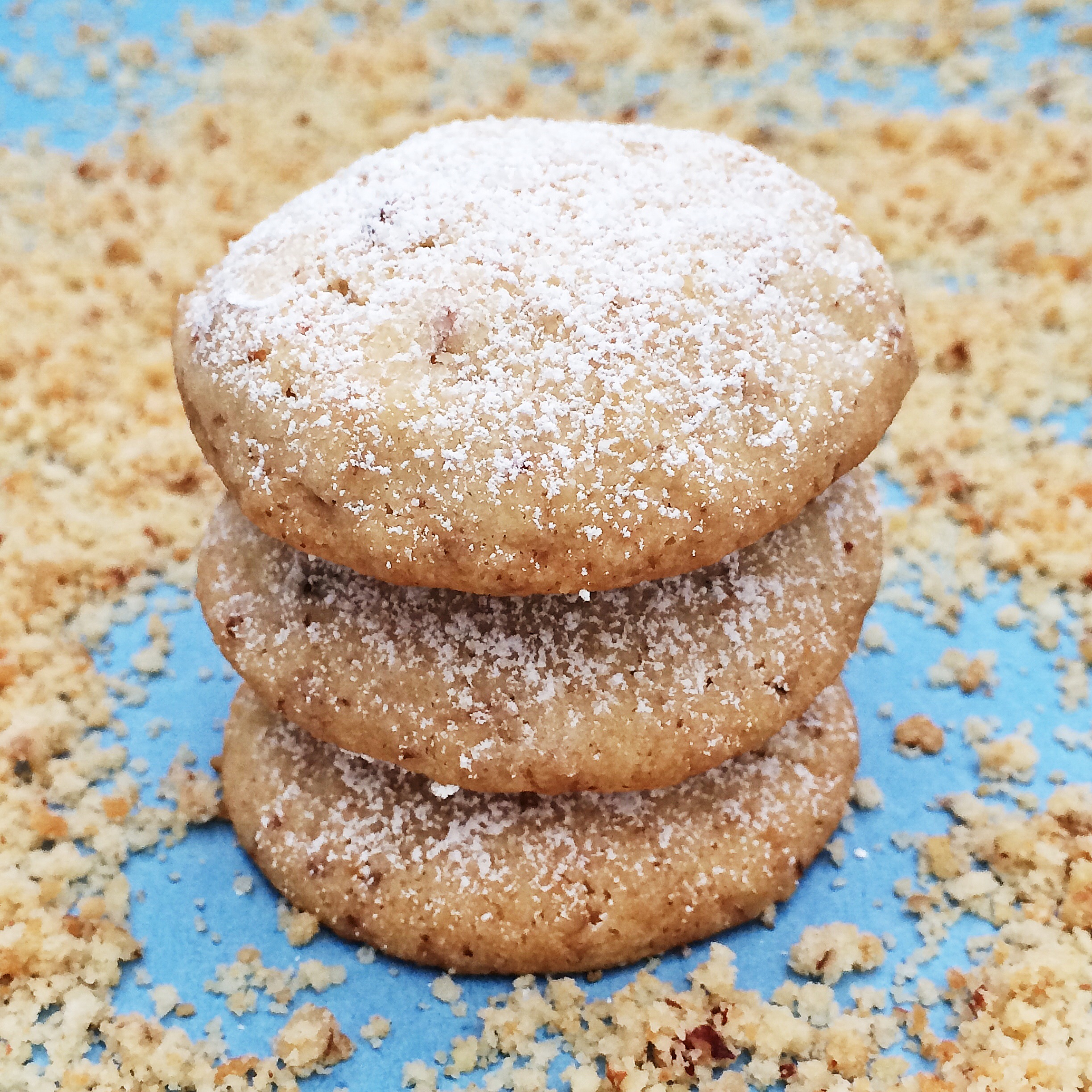 It was a Kiwi sailboat captain who first told me about St. Procopio’s beach. Spreading itself wide along the western coastline of Naxos, its shores were gently slapped and tickled by the cool blue waters of St. Procopio’s Bay as Mount St. Procopio cast its beatific shade from the east.

At least, that is how I assumed it would be, given the name. Captain Patrick suggested my friends and I might rent Vespas and ride down to the most Procopio place on earth the next afternoon. I imagined myself making a slow, pious progress to the water’s edge where, surrounded by my companions, I would plunge my hand into the fine, warm sand; raise my arm; and gently loosen my fist so that the granules fell gracefully (and neatly) into an awaiting, worthy receptacle.

“Don’t worry, Gary,” I’d say to one of my friends, “we’ll find St. Humbarger’s Beach… someday.” He would be comforted and moved to tears by my generousness of spirit.

But fate–or at least the prevailing winds– had other plans. We wouldn’t have time to make an official pilgrimage if we were to make our next port-of-call by nightfall. When Patrick broke the news, I looked visibly deflated. Not as if someone had let the wind out of my sails, but out of my lungs. Fortunately, he had another idea wherein I might have plenty of opportunity to refill them– this time with water.

“You could swim for it,” he said. He told me he could probably get our sailboat about a quarter of a mile from the beach. He stressed that fact that a great deal of swimming would be necessary on my part. “Think you can do it?”

I was about to brag that I was trained by an Olympic swimming coach, which was true, but thought better of it when I recalled that I was best remembered for repeatedly shitting in terror as I was flung into the deep end of the poor woman’s pool. I also thought of Shelley Winters showing off her swimming medals in The Poseidon Adventure just before diving underwater to save Gene Hackman. Her subsequent death scene was especially touching.

“Yeah, I can totally do it!” I said, hoping an outburst of Southern California enthusiasm might help distract him from the look of bowel-related concern my face probably betrayed.  I supposed I didn’t have to go through with it, but I was very aware of the fact that I would most likely never find myself in this situation again and wholly consumed by the idea that I absolutely had to collect sand from this beach to give to my father as a souvenir of my journey.

Patrick gave me a ten-minute warning before we were to reach the bay of Agios Prokopios, as it’s called in Greek.  I hopped into my swim trunks and searched around in panic for something appropriate in which to place the sand. With no ivory boxes with chased silver clasps to be found anywhere on our small sailboat, I dumped out the contents of my clear plastic, zipper-topped toiletry bag and shoved it down my pants. My treasure will be safe in there, I thought, as if sand somehow needed to be protected from water.

Above deck, my friends were waiting for me. Mostly, I imagine, they were waiting to get this thing over with. They were kind enough to humor me, but I had the sense that the grandeur of my quest was completely lost on them. I steadied myself along the starboard side of the boat and, when the boat reached its closest point to the shore, I jumped.

The water was cool and exceptionally clear. But there was so much of it between me and my precious sand. A quarter of a mile didn’t seem like much of a distance when I was dry, but now that I was floating in the Aegean Sea with a plastic bag shoved between the support netting of my swimsuit and my junk, I saw things quite differently. But I had an important job to do, so I swam.

And swam. And then I swam some more. My legs got tired. The plastic bag was threatening my chances of ever reproducing, so I shoved it into a side pocket, hoping it wouldn’t fall out as my graceful, Dick Cavill-esque Australian crawl degenerated into outright flailing. I looked back to see the boat slowly circling behind me. It didn’t seem far enough away from me for my liking. Not as far away as the beach, at any rate.

When I finally made it to the shore, it was on my hands and knees– gasping for air, spitting up salt water, and making obscene noises like a harbor seal crammed into a pair of navy blue trunks. I sat on the edge of the beach, trying to catch my breath, hoping my heart wouldn’t explode. Looking out to sea, the boat seemed very far away as it moved back and forth over the horizon, but it didn’t matter because I was now surrounded by my quarry– fine, white sand flecked with gold and brown.

Though disturbingly out of breath, I was proud of myself for not drowning.

My brief moment of self-satisfaction was interrupted by what sounded alarmingly like German. I turned around to find several people staring at me– every last one of them as brown and wrinkled as a shelled pecan. Two women, who wore matching, wide-brimmed sun hats and nothing else,  glared at me with palpable disapproval. A man wearing even less than his companions seemed to be trying to tell me something important, it was almost entirely lost on me until I heard him utter “Eff Kah Kah” while shaking his head and pulling at the imaginary waistband of a pair of pants he most definitely not wearing.

By some administrative oversight in the early 1980s, our cable company piped all of their available pay channels onto my family’s main television. I took an active (and clandestine) interest in a program called “Sexcetera: The News According to Playboy.” One particularly vivid segment was their visit to The Englischer Garten in Munich, which contained an area dedicated to Free Body Culture or, more commonly, nudism.

Eff Kah Kah. Freikörper-bloody-kultur. I was grateful for my early exposure to educational television, but saddened to know that my precious beach was overrun by naked Germans. And Germans who wouldn’t stop staring and making gestures at that. I turned my attention back to the water. I was still too tired swim back to the boat and didn’t wish to waste precious energy by moving to a more textile-friendly part of the beach. In front of me was a sailboat full of friends I feared would get bored and abandon me on Naxos like some hairy-chested Ariadne; behind me, a large group of increasingly irate, Northern European nudists. My situation was anything but relaxing. My vision of a Procopio paradise was shattered.

Or was it? I kept concentrating on the word “paradise” until I realized that no one wore clothes in capital “p” Paradise. Certainly not Adam and Eve. Noting that there were no fruit-bearing trees in sight, I decided that stripping was the safest and most energy-efficient thing I could do under the circumstances. I unknotted the drawstring of my trunks and shimmied out of them, placing them neatly, but dramatically by my side. I somehow hoped that my critics would be pleased by my gesture, but when I turned around, they had stopped looking as if the last five minutes had never happened. It was as though my nudity had made me somehow invisible to them. I felt both liberated and insulted by their inattention. I sat there pondering the state of my own nakedness for a few more minutes until I felt ready to swim back to the boat. I filled the plastic bag with sand, pulled on my shorts, and headed into the water before the Germans started grunting again.

I sensibly took my time on the return trip, opting for a more leisurely Esther Williams backstroke— one looks much more relaxed and inhales far less sea water that way.

When I climbed back onto the boat, a friend handed me a much-needed gin and tonic. I pulled the bag from my pocket and saw that at least half of the booty had been lost in my exertion, but as I sat there on the deck gently infusing alcohol into my bloodstream, I realized that there seemed to be plenty of it clinging to my own booty, which I had neglected to brush off in my haste to get away from the denizens of my beach.  I thought it best not to add it to my father’s gift. Instead, I rinsed out my trunks, letting the sand make its eventual return to its rightful home, somehow happy knowing that by virtue of some gentle chaffing, there would soon be a little extra bit of Procopio on Agios Prokopios beach. 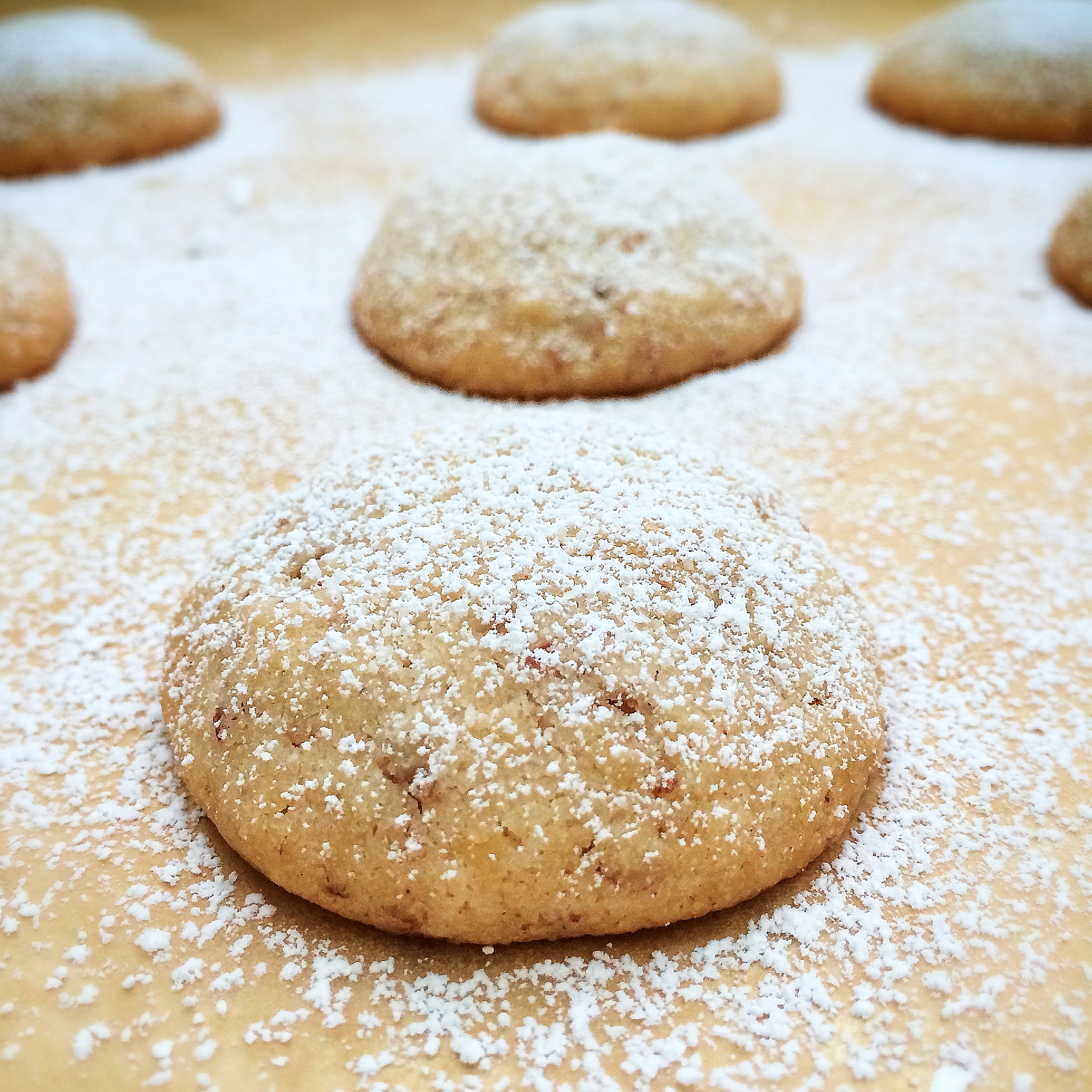 These cookies are aptly named– crumbling to the texture of fine sand at the slightest pressure. Fortunately, these treats do not require thousands of years of pounding surf to make like real sand does. And they are infinitely tastier and more digestible.

Makes about 36 cookies. Or about enough fake sand to cover one square foot of an imaginary, confectionary beach.

2. Cream together the butter and sugar until light and very fluffy and it looks alarmingly similar to Crisco. Using the paddle attachment of an electric mixer makes this an easy task,  but this effect can also be achieved manually with a great amount of exertion. Add vanilla extract.

3. In a separate bowl, combine the flour, ground pecans, and salt. Gradually stir in these dry ingredients into the sugary, buttery fluff until just combined.

4. Refrigerate for a minimum of two hours, or ignore the dough completely until you find you have use of it.

6. Bake for about 20 minutes, or until the bottoms and sides begin to brown, like an FKK-er napping on his stomach. Remove cookies to a cooling rack and dust with powdered sugar while they are still warm. Do not dust actual nudists with powdered sugar without their consent.

7. When cool, you may now eat the cookies whole, letting them crumble in your mouth or you may crush them with clean hands, letting the grains of cookie sand tumble into an awaiting receptacle. What you do with this sand is now up to you. Gift it to loved ones and enjoy their confused faces as the smile and wonder what the hell you’ve just given them. Sit alone in your apartment watching Maggie Smith in George Bernard Shaw’s The Millionairess* on YouTube as you shovel the crumbs into your mouth with a large silver spoon. Invent an adult role playing game which involves you as a hapless traveler and your mate as an angry nudist on a pecan sandy beach.

*My preferred method of enjoyment.

I write about food and am very fond of Edward Gorey. And gin.
View all posts by Michael Procopio →
This entry was posted in Rants and Stories and tagged agios prokopios, cookies, Esther Williams, FKK, Germans, nudism, pecan sandies recipe. Bookmark the permalink.

9 Responses to Sand in My Pants