“Curtains” or: “7 Little Von Trapps and Then There Were None.” 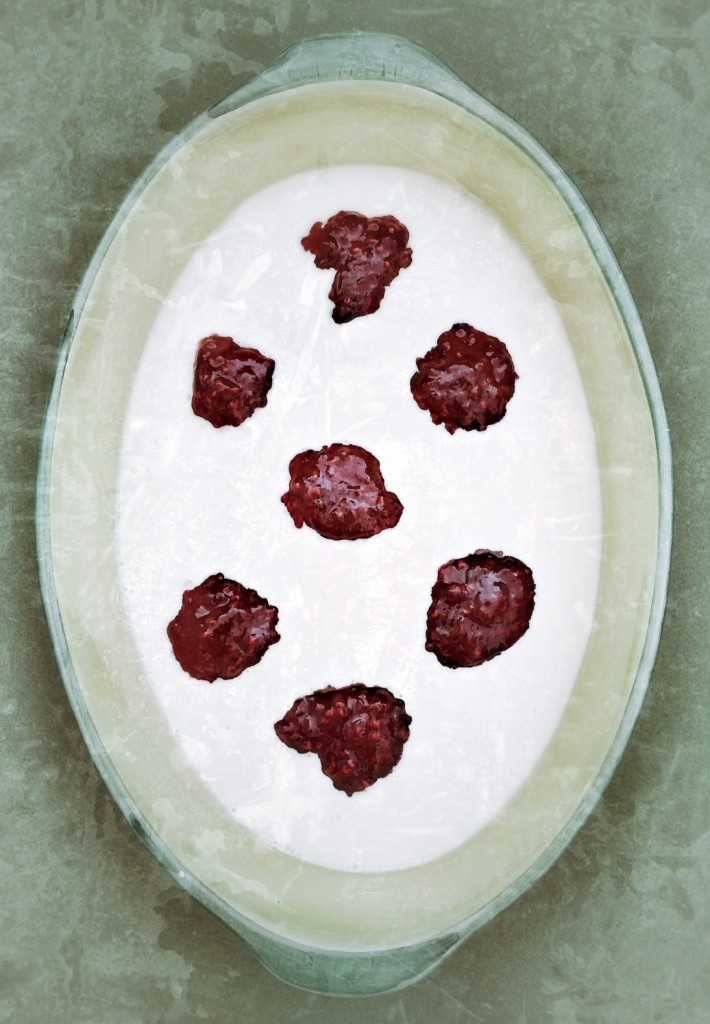 How do you solve a problem like Maria? In the United States, the answer would probably be “by lethal injection”. Austria, on the other hand, has done away with the death penalty. It might not be an appropriate solution for dealing with a flibbertigibbet or even a will-o’-the-wisp, but a serial child murder? Quite possibly.

I’m not implying that the real Maria Von Trapp was anything of the kind. And I have nothing against Julie Andrews in the least. It’s just that, lately, I can’t stop imagining The Sound of Music as an entirely different sort of entertainment.

As I sat down to eat breakfast with my coworkers several days ago, I remembered my friend Katie was performing in a stage show on the peninsula, so I asked her how it was going.

“What’s the name of it again?” I inquired between slurps of bone broth.

“I think that name would be a good title for a Sound of Music murder mystery or something.”

“You know, Maria made play clothes for the children out of her old curtains. I was just thinking how fun it’d be if the kids started dropping off, you know… one by one.” I was just being an idiot, but idiotic thoughts have a way of staying with me.

It’s not that I don’t care for the movie—quite the opposite is true. It’s just that it would have been so much better had the Von Trapp children been even remotely interesting. Or had they been able to maintain their vaguely English accents from one line to the next. Or had they been able to act. When I hear that wearisome septet sing “Doh, a dee-ya, a female dee-ya,” it makes me want to cry, to quote the otherwise unquotable Marta.

I feel The Sound of Music would be a much more entertaining film if Maria was a sugar-and-spice novitiate on the outside, but a cold, ruthless murderess at her amoral core. She may claim to the Reverend Mother that she is unable to control what she thinks and feels, but in truth, she is in full control of her emotions, such as they are, and lays on the kind-and-loving shtick so brilliantly that she gains not only entry to the Von Trapp house but gains the trust of everyone residing within it.

In my version of the film, the only person who sees through Maria’s song and dance is the beautiful baroness. Unfortunately, Baroness Schrader misinterprets the deception as mere gold-diggery, and not cold-blooded serial murder. She does the decent thing and distances herself from Captain Von Trapp when she realizes he’s in love with his governess (whom he promptly marries). Tragically, it is not within her power to send the children to boarding school as she had intended, where they would be safely out of reach from the deadly machinations of Maria.

But how would they go, these seven hapless Von Trapps? What a good question. I have a few ideas, but if you, dear reader, can think of more appropriate endings for them, do write in. This is a work in progress.

Here’s a tentative list, in the order of their demise.

Liesl— Maria convinces The Captain that his eldest is indeed old enough to stay and taste her first champagne. After consuming an entire bottle at Maria’s insistence, it is suggested that Liesl retire to the gazebo in order to finish off a second, which she does. Her body is found the next morning. She had been leaping from bench to bench without the assistance of a telegram messenger and crashed through the glass structure. In the fall, which rendered her unconscious, she suffered a thousand little cuts, from which she slowly bled to death.

Friedrich— Trained in the precise and deadly art of alpine medicine ball tossing, Maria “accidentally” hits the poor boy directly in the face at family playtime. He was struck with such force and at such an angle that his nasal bones pierced his brain, killing him instantly*.

Gretl—The heavy brocade material used to make Gretl’s bib overalls were made even heavier by Maria’s subtle and inspired addition of lead inserts. Out on the lake one afternoon with her remaining siblings and governess-cum-stiefmutter, the boat overturns and the youngest Von Trapp sinks like a stone in the deepest part of the lake.

Louisa— Known for keeping jars of arachnids on hand to terrorize governesses, the sturdy young blonde has the tables tragically turned upon her when Maria releases hundreds of dornfingerspinnen, or yellow sack spiders, under the unsuspecting girl’s counterpane. Though not killed outright by the dozens of venomous bites she incurs, the pain and discomfort are so pronounced that she quickly goes insane and is shipped to a clinic on the Dalmatian coast to convalesce, which mysteriously burns to the ground with her in it shortly after her arrival.

Marta becomes the first (and to date, the only) case of a person dying from a surfeit of ladybugs, which were reported to have been one of her favorite things.

Unable to cope without her sisters, Brigitta listens intently as Maria sings “Düsteren Sonntag”, otherwise known as “The Hungarian Suicide Song”. Inspired, Brigitta decides to leave a note for her father stating that she is “glad to go, [she] cannot tell a lie.” She then climbs to the rooftop where she flits and floats. Having read his sole surviving daughter’s last missive, her father races to the roof in order to talk her down, but she fleetly flees from him and flies over the edge, breaking her neck on the lawn very near where her eldest sister met her own end.

And poor, incorrigible Kurt is once again overlooked and dies of neglect. No one notices.

Maria, who has now successfully eliminated all physical evidence of Captain Von Trapp’s prior marriage, suggests to him that they start a family of their own together, offering herself to him on the floor of the ballroom directly in front of the puppet stage which had so recently been the scene of so much happiness. He breaks down and tells her that he couldn’t bear the thought of bringing another child into the world for fear of losing it. She cradles his head in her lap as he cries, consoling him with a chilling rendition of “So Long, Farewell” as she reaches for the nearest available marionette, the strings of which she could use to strangle her emotionally weakened husband and thus inherit his fortune and lovely lakeside home.

At that very moment, the baroness and her gay best friend Uncle Max burst in. With a powerful combination of bitchy comments, fabulous style, and superior breeding, they foil Maria’s attempt on Georg’s life and drive her from the house. The Captain realizes his mistake of choosing a homicidal-yet-alluringly-musical servant with no significant references over a world-weary sophisticate with a heart of gold. Elsa Schrader gets what she’s always wanted– a man who needs her, Uncle Max gets unlimited access to the Von Trapp wine cellar, and the three of them live happily ever after. Until the Nazis take over the country a few weeks later.

And what of Maria? She flees on foot over the mountains. But instead of heading west to Switzerland, she veers north into Germany, where she is allowed to ply her hideous talents on unruly children until the end of the war. She is later found guilty of crimes against humanity at the Nürnberg trails and imprisoned. 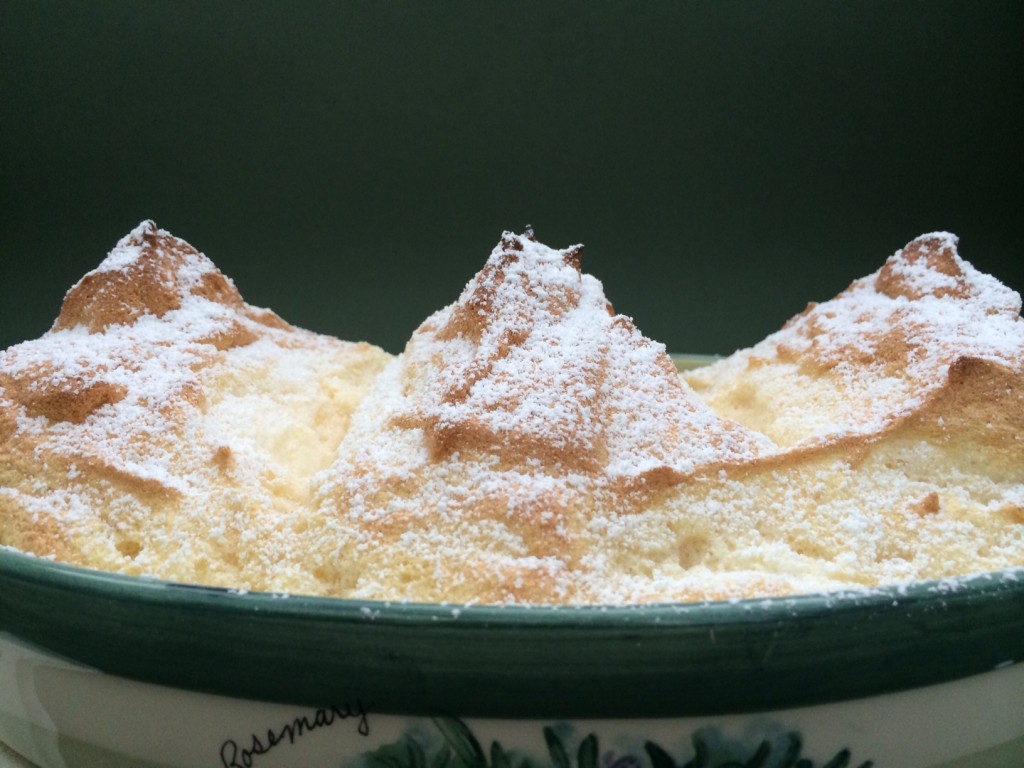 How fortunate it is that there is a dessert which fits the above story like a murderous glove? It’s a frothy little conceit, just like the original film, and yet it hides a bloody secret– dollops of raspberry jam are buried beneath powdered sugar-dusted mountains of meringue. Three mountains, to be exact: Festungsberg, Mönchsberg and Kapuzinerberg, which are the mountains which happen to surround the charming Austrian city of Mozart and Sound of Music tour busses. I’ve added seven spoonfuls of jam– one for each Von Trapp child. Name them as you place them one by one into the luxurious lake of cream.

This recipe is a modified version of one found on Epicurious. All other recipes researched were  confusing and very horribly written.

Serves Whoever is left to eat it.

• 1/4 cup of heavy cream
• 7 generous dollops of raspberry jam
• 5 large egg whites (at room temperature– you don’t want eggs straight from the fridge.)
• 3/4 teaspoon of kosher salt
• 1/2 cup of white sugar
• 1 tablespoon of all-purpose flour
• 3 egg yolks (hopefully you are smart enough to have gotten them from 3 of the 5 eggs you’ve already abused for their whites)
• 1 teaspoon of pure vanilla extract
• Powdered sugar for faking snow-capped peaks

1. Place your oven rack to the middle position in your oven. Heat this very same oven to 400°F.

2. In a 9-inch oval baking dish, pour the cream so that it shallowly covers the bottom. With a soup spoon or, if you don’t believe in soup, a similarly-sized one, place seven dollops of jam. I like to say the name of each Von Trapp child as I go, always placing Liesl in the center. 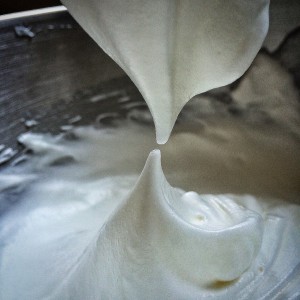 3. Combine the egg whites and salt in the bowl of an electric mixer and whip until soft peaks form. At this point, continue beating as you add the sugar a little at a time until it is all gone and your egg whites have transformed into stiff, glossy peaks. Sprinkle the flour over your egg whites and fold in gently, but very thoroughly– streaks of flour in meringues are unpleasant, not to mention embarrassing.

4. Whisk together the egg yolks and vanilla until they are frothy but not rabid-looking. Fold them into the whites with the same élan you so recently performed with the flour.

5. Spoon three enormous globs of meringue into the awaiting, jam-speckled cream, shaping them to look like distinct peaks of a mountain chain, but making certain that all of the cream base is covered.

6. Pop into the oven and bake for 15 minutes. When it is finished, it will still be a trifle jiggly, but do not become upset by this. If you want a less custardy sort of nockerl, turn the oven off, but leave the dish in the oven for another 5 to 10 minutes. Or, you know, until you’re comfortable taking it out.

7. When you do remove it from the oven, dust it with powdered sugar to suggest snow– pure, innocent, cleansing snow.

Serve warm to the Austrian Navy Captain nearest you. If you are of a somewhat Shakespearean bent, you can pretend you’re Titus Andronicus and that he is Tamora, unsuspectingly eating her own children. It is an abrupt switch of gender to be certain, but I strongly believe your imagination can handle it.

Or you can just eat the whole damn thing by yourself and pretend none of this ever happened because no one is going to want to talk to you now that you’ve just hypothetically killed off all the children from their favorite movie, which they will never be able to watch in quite the same way again after reading this post.

So long, fare well for now,

* True fans of The Sound of Music will know that Nicholas Hammond, who played Friedrich, went on to portray “Doug Simpson”, who dissed Marcia after her own nose was broken (less fatally) by another type of ball.

I write about food and am very fond of Edward Gorey. And gin.
View all posts by Michael Procopio →
This entry was posted in Stage, Film, and Television, Sweets and the Like and tagged Austrian dessert, Curtains, Maria von Trapp, murder, Salzburg Nockerl, The Sound of Music. Bookmark the permalink.

30 Responses to “Curtains” or: “7 Little Von Trapps and Then There Were None.”

Leave a Reply to the hungry writer Cancel reply