The Biggest Sausage on Melrose 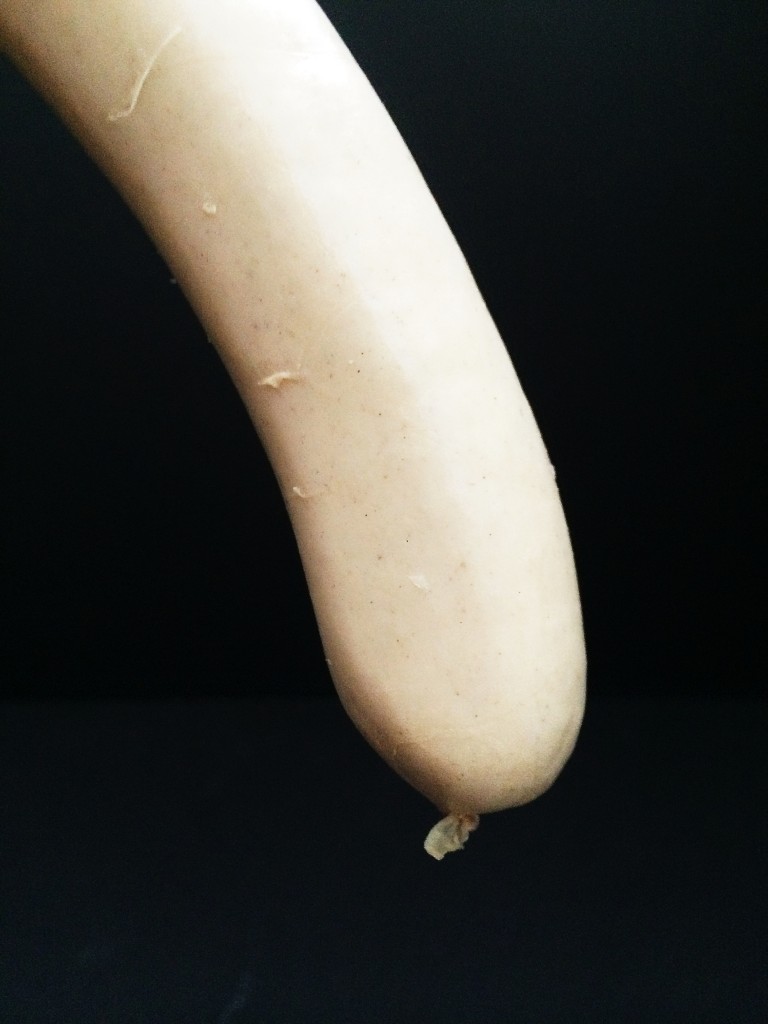 The evening started out innocently enough– a quiet back to school dinner with friends. But my highly prized purity was somehow called into question before the appetizers had even arrived.

My friend Alex had chosen a little Italian restaurant on Melrose as the gathering place for our last meal before we started our final year at UCLA. It was cozy and dark and employed a jazz quartet off to one side which played all the old standards. I can’t remember the name of the place, but I felt very much at home. There were enormous grissini placed in the middle of the table shooting up from the bottom of a water glass like glutenous phalluses. I didn’t think much of it at the time, but it was a centerpiece more fitting than flowers, given the direction the night was about to take.

We ordered drinks and appetizers, chatted about school, what classes we were taking. The usual banal conversation one makes with people one doesn’t know deeply. My martini arrived– beautiful in its enormity– and it reminded me that I should probably make a bit of room for it, so I excused myself and made my way past the jazz quartet and through the door into the men’s room.

It was a small facility, and there were two side-by-side urinals, which I never much enjoy, but I had the whole room to myself. I could relax and enjoy doing what it is one generally does when confronted with both a full bladder and a large porcelain bowl. But as soon as I began, the door opened. An old man approached the open spot next to mine and joined me. I nodded to him in the way most men do when forced to acknowledge each other when both of their hands are occupied with other business. He nodded back. And that was the moment I realized I was peeing next to Mr. Television himself, Milton Berle. He smiled at me, then did something that left me temporarily confused. He looked down at my equipment, turned his head to look at his own, gave a slight jerk of the neck in his direction, then smiled and nodded again, but then went back to concentrating on his own business.

Was I just cruised by The Thief of Bad Gags? It didn’t feel like it, but it did make me extremely uncomfortable. I finished up, washed my hands, and made my way back to the table. “You’ll never guess who I just peed next to,” I said. “Milton Berle!” Celebrity sightings are a common occurrence in Los Angeles– you  point them out to friends with the same level of enthusiasm as pointing out a squirrel running across the lawn in the suburbs, so I was very surprised by the amount of interest my remark caused every one of my fellow diners.

“Did you see it?” asked Alex, almost breathless.

“His COCK!” he exclaimed. His English accent made it oddly acceptable to me that he had just yelled the word “cock” in public place. But few people could have heard it over the noise and the jazz music.

“I’m not in the habit of looking at other people’s junk when I’m trying to pee,” I responded somewhat indignantly. “Besides, why would I want to see an octogenarian’s cock.” I borrowed his accent for extra emphasis on the last word. The whole table groaned at my ignorance. 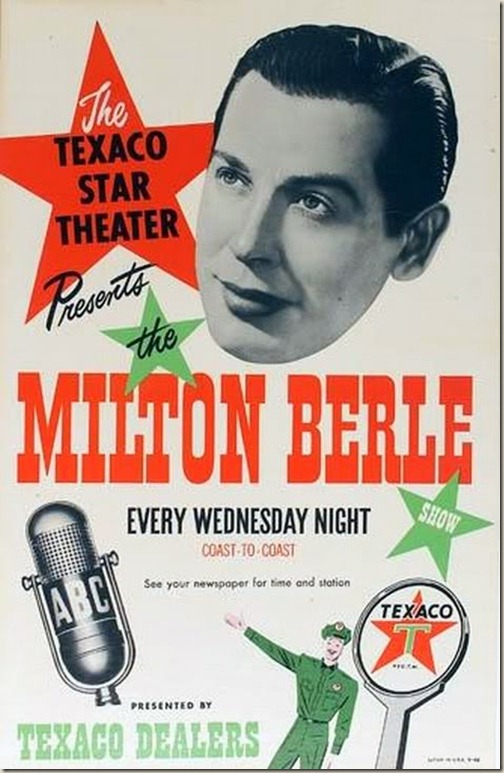 “Michael, Milton Berle is supposed to have the biggest dick in Hollywood!” he said, even louder.

“How do you even know that!?” I asked, somewhat disgusted, but matching him in volume. As soon as the words were out of my mouth, the men’s room door opened and the spotlight that was on the jazz quartet moved swiftly on to Mr. Berle. The band had seen him go in. They’d been biding their time for the moment he re-emerged. As soon as the light hit the rather surprised old man, they gave him an over-the-top musical “Ta-Da!” The whole restaurant erupted in laughter and applause. Uncle Miltie, ever the ham, bowed in thanks. With my newly found knowledge, I couldn’t help but think he was bowing to his own penis.

It was then that I was able to decipher his strange men’s room body language. He was basically telling me, “Yeah, it’s me. Go ahead and look if you want to. Everybody does.” I might have been the only person in the place who didn’t know about Milton Berle’s endowment,  yet I was the only person he invited to look at it. I found a small bit of comfort and satisfaction from that thought, then took a large sip of my martini. The eyes of everyone at the table had by then left Mr. Berle and returned to me, so I did the only thing that seemed appropriate, given the occasion: I picked up an exceptionally long grissini and toyed with it for a moment, and attacked it from the side of my mouth as Bugs Bunny might each a particularly challenging carrot. And then I raised my glass in a toast:

“To missed opportunities,” I said, taking another deep sip to help wash down the dry breadstick. It was well received and repeated back. I settled in with the menu to order my main course. There was sausage on the menu, but I declined. I thought I’d had enough for one evening.

Not that I would know. But everybody else does, so you might as well ask them. 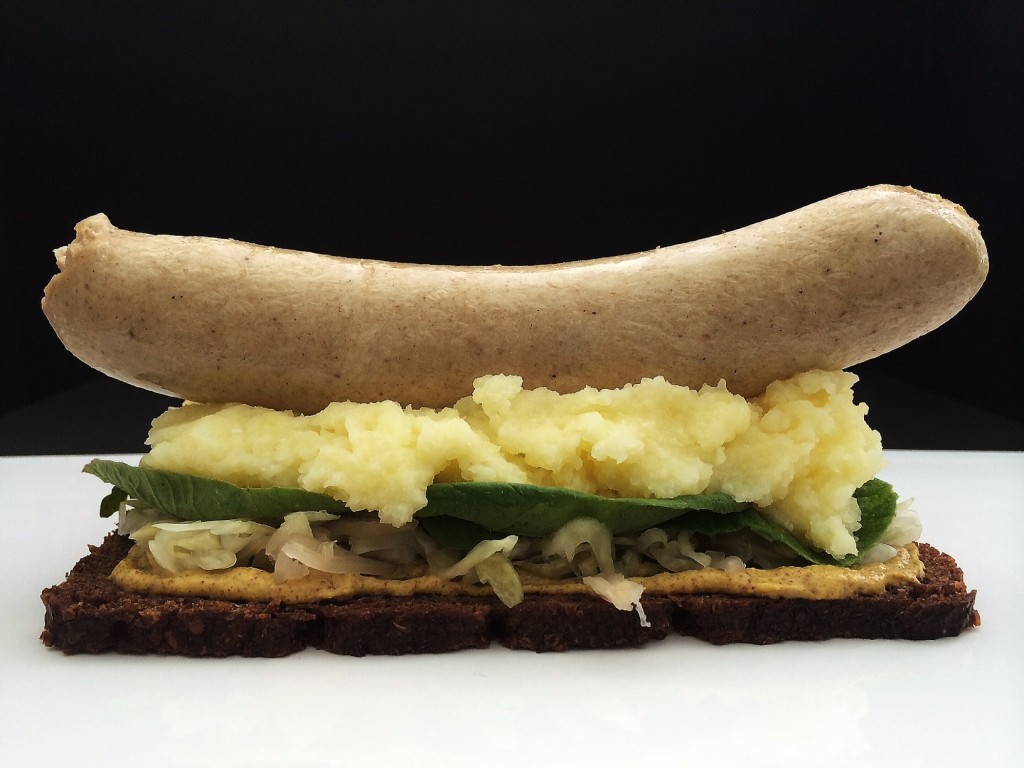 There’s more to the story, of course, but you’ll need to buy me a drink if you want to hear the rest of it.

The literal sausage in the story was of the Italian variety, sliced up and served with farfalle pasta, sun-dried tomatoes, and basil (as pretty much everything was in those days). I just don’t think it suits the story at all. The thought of slicing it sends shivers down my spine.

So the recipe has taken a decidedly German turn. Bockwurst originated in Berlin and, as luck would have it, the name Milton Berle was born with was Mendel Berlinger. Typically there is a bit of pork mixed in the the sausage’s veal stuffing, but Berle was quite the ham, so there you have it.

It’s open-faced, right out there for all the world to see. The only difference between it and Mr. Berle is that this sausage remains uncut when presented to the unsuspecting.

• 1 Bockwurst (Or whatever sausage suits your tastes)
• 1 slice of pumpernickel bread, toasted
• A thick slathering of good, German mustard
• A handful of sauerkraut, drained. Any more than that is a waste, I’ve heard it said.
• A few tender greens (I’ve used radish tops, but watercress would be lovely)
• A few dollops of mashed potatoes

1. In a vessel big enough to take a large sausage, pour in a paltry 3 to 4 inches of water and a pinch of salt. Bring to a boil and then reduce to a gentle simmer. Slip in the sausage. DO NOT LET THE WATER RETURN TO A BOIL. If you do, the casing will explode and you will have a very disappointing and unattractive mess on your hands. Continue at said gentle simmer until the bockwurst is cooked through– turgid and yet giving. Keep warm.

3. Slather the warm toasted bread (it’s not easy to tell visually when pumpernickel is toasted, but it does make for a much more solid sandwich base) with mustard, cover with drained sauerkraut, blanket that with greens, spoon the warm mashed potatoes next, and then finally secure the hot sausage in its anchoring bed of potato-y fluff.

4. Bockwurst is traditionally served with bock beer, but I say have it with a martini. You’ll need something strong to cope with what’s on the plate in front of you.

5. Just how you go about eating it is entirely up to you– knifed-and-forked or picked up whole with your hands, eaten in the privacy of your own home our out in public for all the world to see. I’m the last person on earth who’s going to tell you how to handle your own sausage.

6. As a little something extra, try covering the wiener with some cheese and placing it under the broiler to make a Miltie Melt? No, I wouldn’t do that, either.

I write about food and am very fond of Edward Gorey. And gin.
View all posts by Michael Procopio →
This entry was posted in Uncategorized and tagged largest penis in hollywood, Melrose, milton berle, sausage. Bookmark the permalink.

20 Responses to The Biggest Sausage on Melrose