I’ll Drink to That 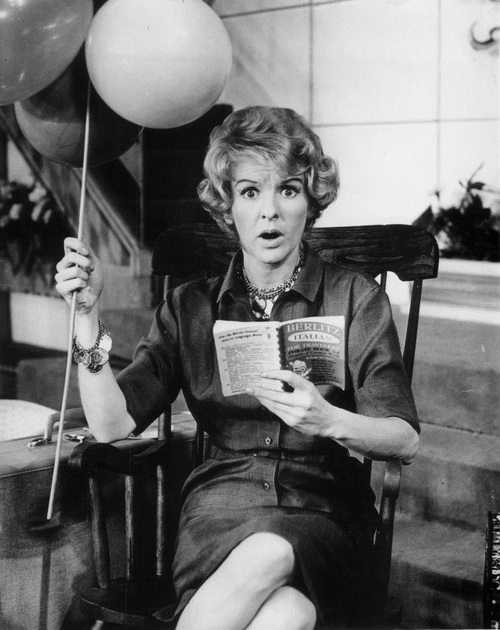 My friend Jay has given me countless gifts over the years and exposed me to a great many things, not all of which are printable. But if there is one thing for which I am truly thankful, it was my introduction to a woman who sang with a voice that sounded as if someone might have soaked a chain-smoking cat in scotch, then attempted to beat it to death with a megaphone.

Several times a month, I would wander over to Jay’s apartment in the Hollywood Hills after work and find him poised in front of his stereo with a finger ready to hit “play” on a cd because there was always some Broadway show tune I absolutely had to listen to: Into The Woods, Follies, Sunday in The Park With George, Assassins. There were occasional forays into other composers but, for the most part, my musical education was Sondheim-centric. I’d take a seat on his couch and give him my full attention. I was an eager student.

Then, at some point in my studies, he decided I was finally ready for her.

The song started off quietly enough– low clarinets and soft piano chords. And then the voice of what I assumed to be a woman, all sandpaper and Lucky Strikes, croaking the words “I’d like to propose a toast.” From what I could make out, she was raising her glass to ladies who lunched, lounged in caftans and chose hats with very little pleasure.

“Does anyone…still wear…a hat?” she asked.” I’ll drink to that.” Jay paused the song briefly in order to repeat that line and say “God, I love her.

The number picked up speed as the woman seemed to go from wry observation to disgust to self-recognition to anger:

Another chance to disapprove
Another brilliant zinger,
Another reason not to move.
Another vodka stinger.
Aaaaaaaaaaaaaaaaaahhhhhh!
I’ll drink to that.

The song finished with her screaming at everyone to rise. I sat there on the couch, mildly shell shocked. And all Jay had to say was this:

“Strrrrrrrrrritch.” He looked very pleased with himself. And he had every right to be.

Not long after, I found myself once again on Mr. Floyd’s couch, but this time flanked by two female friends, Theresa and Cynthia. Jay took up his customary post at the stereo but, this time, instead of his customary Broadway musical lecture, he spoke only one word:

We were all young and single and utterly devoid of any real sense of responsibility, so naturally we all nodded in agreement. After two hours of frantically searching for a misplaced kitten and wondering what to wear, we left on our otherwise-spontaneous road trip to Las Vegas.

It was midnight before we left. The girls slept in the back seat as Jay and I chatted and chain smoked in the front. We drove straight through, not even stopping to pay our respects to The Bun Boy and his world-famous thermometer. As we crossed over the state line, our excitement and our energy increased. A few miles later, Jay put on some music he felt suitable to the occasion.

Strrrrritch. We both sang. Very enthusiastically.

A toast to that invincible bunch,
The dinosaurs surviving the crunch.
Let’s hear it for the ladies who lunch–
Everybody rise!

The timing was ideal. As we neared the end of the song, we crested a hill on Highway 15 and caught our first glimpse of the lights of Las Vegas. We finished with a near-manic gusto.

The girls in the back seat were unmoved. Physically, at any rate. Neither of them sprang to attention at our gritty screeching. But then we both knew that Cynthia was never one to jump to the commands of any man, so we didn’t worry.

Our performance– if not brilliant– was, at the very least, cathartic. I sank back into the bucket seat, lit another cigarette, and mentally counted all the money I was about to win at the Blackjack tables of Binion’s.

Which, of course, didn’t happen. In fact, the only thing I won on that trip was that glorious four minutes and twenty-seven seconds of singing in the car with Jay and Elaine Stritch. I left 12 hours later with no money and a terrific case of strep throat. And for a week afterward, if I could speak at all, I sounded alarmingly like Ms. Stritch herself. Was her song the cause of my bad luck? Doubtful, but for whatever reason, I stopped listening and put it and her out of my mind.

But I would be dusting her off a couple of years later.

It seemed an appropriate choice of tune for a mixed tape. I was working at a place in Beverly Hills where the type of ladies who lunched in the song did precisely that. And dined and supped on dry salads and white wine. Remembering the catharsis I felt after my Stritch duet with Jay, I placed it at the end of a mixed cassette tape I obsessively played on my rides home to Anaheim. Late at night with the freeway  deserted, I allowed myself to get depressed along with The Cowboy Junkies; become tearful with Jacques Brel, begging an imaginary person not to leave me, singing along in a language I could speak but conveniently not fully comprehend; and cap it all off with a good old-fashioned show tune full of screaming and self-loathing for a final, full release a few minutes before pulling into the driveway and collapsing into bed for a few hours before I got up to help my mom look after my brother, slowly wasting to death in his darkened bedroom.

So here’s to the girls on the go–
Everybody tries.
Look into their eyes
And you’ll see what they know:
Everybody dies.

For nearly a year, I played the hell out of that tape. Because I was ostensibly acting out the emotions of other people, I felt free to rid myself of my own fears and anger and sense of infuriating helplessness for 45 minute every night. It proved to be a miraculous release valve for my own, overwhelming emotions, which I was too afraid to deal with alone. It helped to keep me relatively sane. And Elaine Stritch was always the closing act.

She brought down the house every time. Which, in this particular instance, was a 1978 Volvo. I’ve felt a deep sense of gratitude to her ever since. And to Jay and Mr. Sondheim.

Sadly, Ms. Stritch has sung her final number. But, as Jay put it, “She did it well, didn’t she?” I am rather inclined to agree. She had a remarkable life, did some incredible work, abused the hell out of her liver, and still somehow managed to live to the ripe old age of 89.

Hell, I’ll drink to that. And to her.

(Warning: This is a rather subdued version of the song. For the full vocal effect, please click here.) 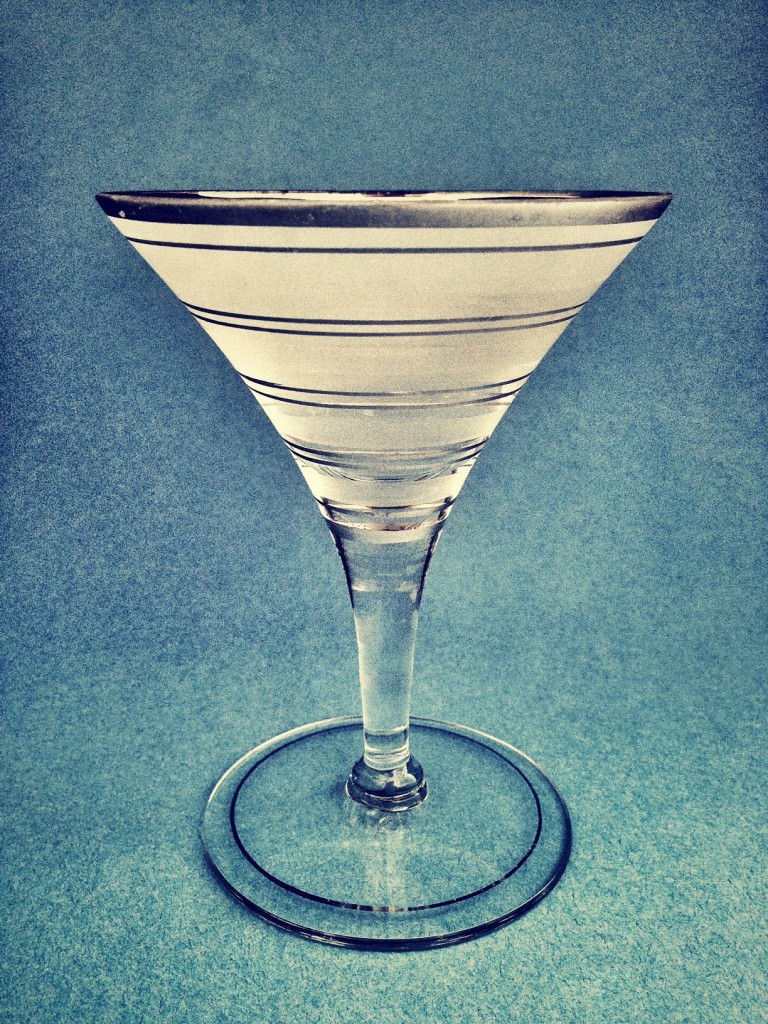 The vodka stinger is a clear derivation of the original stinger cocktail, which is made with brandy.

Being neither a traditional fan of vodka nor white crème de menthe, I am surprised that I find this cocktail remarkably benign-tasting. It’s like a subtle mouthwash for alcoholics that one can swallow without too much worry. It’s vaguely sweet– far from cloying. And it packs a punch. Just like Ms. Stritch.

The stinger was commonly thought of as a “hair of the dog” beverage drunk to revive one’s self if one had had one too many the previous evening. If you feel inspired, have one this Saturday morning alongside a Bay’s English muffin*. By having two stingers, you may very well ensure that your muffin won’t be the only thing that’s lightly toasted.

1. In a cocktail shaker, place your ice cubes.

2. Pour vodka and crème de menthe over the ice. Close lid of the shaker and shake vigorously. If you accidentally add green crème de menthe, you will have made something called a Green Hornet. Act as if nothing wrong has happened and continue with directions.

3. Pour into a small, chilled cocktail glass. If you pour it into a large one, you may be accused of being miserly. Or Canadian.

4. Serve to yourself in a quiet moment and watch Elaine Stritch in 30 Rock on YouTube as you drink. Or make several and serve to your own ladies who lunch, who you secretly detest. Drink two as you quietly loathe yourself for being one of them. Or drink four and scream-sing how you really feel about them.

*Elaine Stritch was the widow of John Bay, heir to the Bay’s English muffin fortune.

I write about food and am very fond of Edward Gorey. And gin.
View all posts by Michael Procopio →
This entry was posted in Celebrities, Liquids, Rants and Stories and tagged cocktail, Company, Elaine Stritch, Ladies Who Lunch, Las Vegas, Stephen Sondheim, vodka stinger. Bookmark the permalink.

20 Responses to I’ll Drink to That