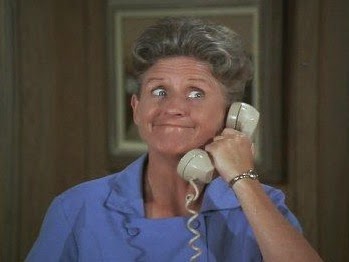 Alice Nelson-Frankin of 4222 Clinton Way was found dead in the home of her employer/companion Carol Brady, homemaker, on Sunday morning, June 1st. Her death was sudden and came as a great shock to all who knew her.

“She was never sick a day in her life,” reports Janet Brady-Covington, a former resident and frequent visitor to the Clinton Way household, “except when she would occasionally throw her back out, forcing us children to do light housework during her recoveries.”

Nelson-Franklin began a promising career in housekeeping in the service of Mike Brady, architect, and Sarah Wilcox-Brady, whose profession is unknown, soon after their marriage in 1956, to help care for their son, Gregory Stanford, who was born out-of-wedlock the year prior, and stayed through the subsequent birth of sons Peter Edward and Robert Eric. After Wilcox-Brady’s mysterious death in 1967, Mike Brady married divorcée/widow Carol Tyler Martin and officially adopted her daughters Marcia Lila, Janet Elizabeth, and Cynthia Sophia.

Nelson stayed on to cook and perform un-taxing domestic chores to help the Bradys’ now burgeoning household as they coped with various problems, often assisting in their resolution in less than 30 minutes’ time and– astoundingly– at the same time every week: 8pm on Friday evenings.

She left the Brady household in 1974, feeling she was no longer needed, and married Samuel Franklin, a local butcher. She spent the next 34 years helping run her husband’s business, honing her knife skills, discovering innovative ways of dealing with meat, and explaining to everyone who would listen that she was not Alice Brady, the Oscar-winning actress, but Alice Nelson-Franklin, the butcher’s wife.

Upon Samuel’s bowling-related death in 2008, Mrs. Franklin sold the butcher shop, which had recently seen a decline in business, in part due to her faith’s prohibition of both locally sourced charcuterie and sleeve tattoos. Having remained close to the Brady family, Franklin returned to 4222 Clinton Way as the paid companion of Carol Brady, who herself was widowed in 1992.

Foul play is not suspected. Though in excellent health for a woman of her age, her ratings had been in decline for some time. She was 88.

Always a fan of economy and pork, one of her favorite recipes is shared below. 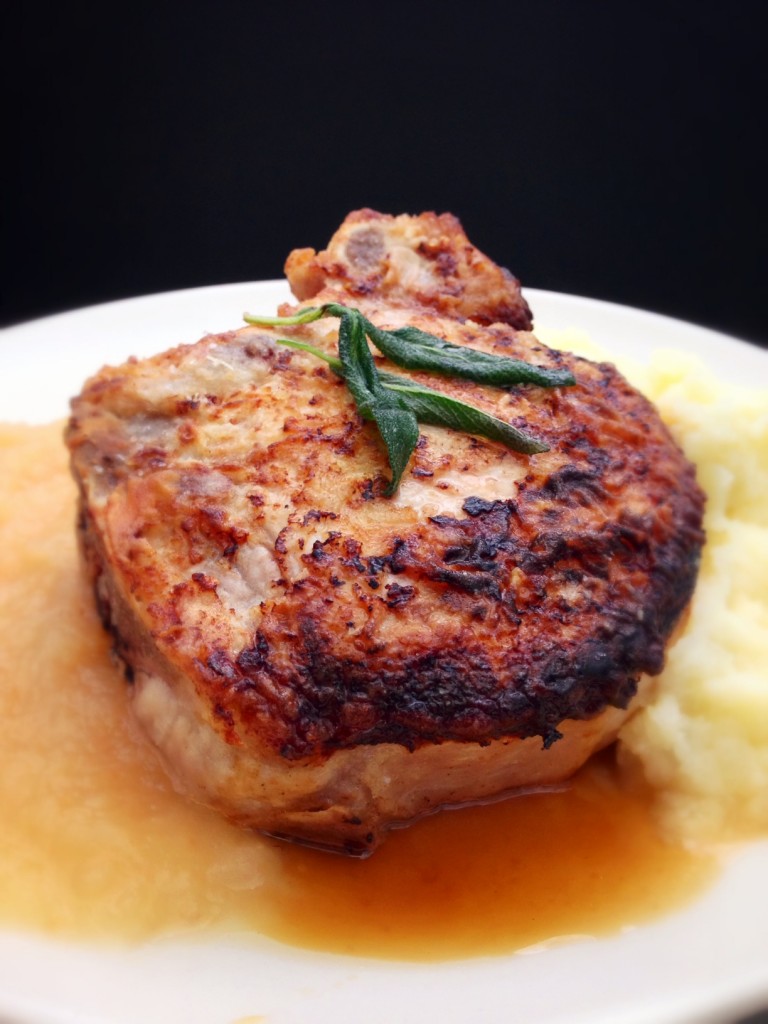 A favorite of the Brady household, pork chops served with applesauce was certain to please even the pickiest of personalities.

Although a bit of forethought is required, this meal can be made in less than 30 minutes, if you include commercials.

Serves: 2, but the recipe is one that can be multiplied to accommodate as big a bunch as you need. (It is a well-known fact that the Brady family never ate all together, but two or three at a time in the kitchen).

• 2 two-inch thick, bone-in pork chops
• 1 quart of buttermilk
• 1 yellow onion, roughly chopped
• 3 or 4 cloves of garlic, smashed and minced
• Plenty of salt
• A few fresh sage leaves (optional)
• Flour for dredging, if you like (this is also not absolutely necessary)
• 3 tablespoons of Wesson oil. (Olive oil may be substituted.)
• A jar of your favorite applesauce– if you are solving the problems of two adults, six children, and an accident-prone cousin, you do not have time to prepare and jar your own.

1. In a large casserole dish, place the pork chops and rub them well with salt. Sprinkle the chopped onion, garlic and (if you feel like it) sage leaves around them and then drown everything in buttermilk. Cover well and refrigerate overnight.

3. Add your cooking oil to a large cast iron skillet, which has been placed upon your stove directly over a burner– either gas or electric– and turn the heat to medium.

4. As your oil is heating, remove your chops from the buttermilk, shaking off the excess, and then pat them somewhat dry with paper towels. Dredge the chops in flour, if you are using it, and shake of that excess. Check the temperature of the oil. If a drop of buttermilk sizzles and spurts, jumping out of the pan, burning your forearm, the oil is hot enough. Sear each chop on one side until said side is golden brown (about 3 minutes). Turn them over and let them brown a bit on the other side, but do not worry to excess about their color. Pop the skillet into the oven, ensuring that both chops are still inside said skillet.

Cook for about 20 minutes, checking in on them with a gentle prod to their centers at about minute 15. If the chops are firm, they are most likely done. Remove from the oven. If the bottom sides of the chops are not browned to your liking, return them to the stove top and finish your business with them. But this isn’t really necessary.

Let the chops rest for a few minutes before eating.

To serve, place large spoonfuls of applesauce onto a dinner plate and a heaping dollop of mashed potatoes*. Lay a chop on top of both pulverized substances, serve on your favorite orange formica pedestal table and enjoy.

* You may, if you wish reserve some of the mashed potatoes for dessert– a reliable source (a teenaged Universal Studio tour guide) has told us that they made an excellent stand-in for ice cream under the hot lights of the Brady Bunch set. Serve with Bosco, which, as everyone knows, made an eerily good stand-in for blood in the shower scene from Psycho (1960).

I write about food and am very fond of Edward Gorey. And gin.
View all posts by Michael Procopio →
This entry was posted in Celebrities, Savories, Stage, Film, and Television and tagged Alice Nelson, Ann B. Davis, applesauce, obituary, Pork Chops, The Brady Bunch. Bookmark the permalink.