The Patron Saint of TV Dinners 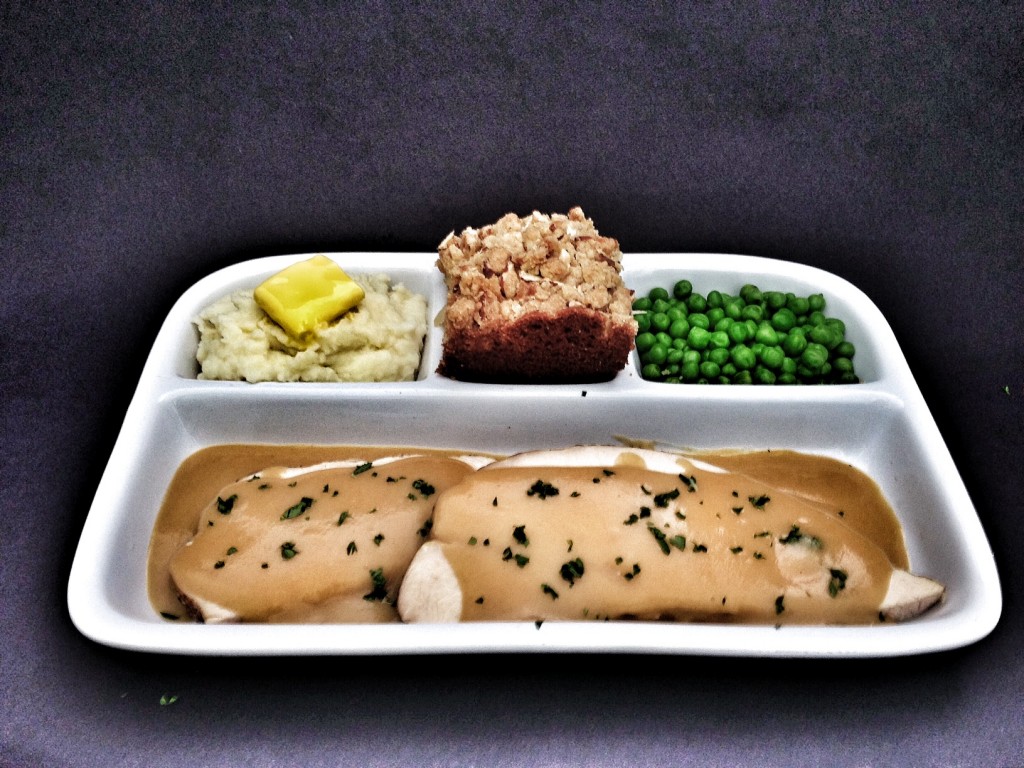 I can’t remember how old I was when I first saw her standing on top of my neighbor’s television set, but I do remember the feeling of not being able to look away. She was tiny– no more than five inches tall– but her presence was large enough to pull my focus away from the action on the screen to her absolute stillness above it.

When I asked my friend’s mother why there was a little statue of The Virgin Mary on top of their Sylvania, she corrected me in a tone which faintly suggested that her family were better Catholics than mine would ever be. “Oh, Honey, that isn’t the Virgin Mary. That’s St. Clare of Assisi– she’s the patron saint of television.”

I approached the plastic idol with what I hoped was a reverential pace to examine her more closely. She held one hand upward in a gesture of blessing and her face looked up to the heavens. Or perhaps she was simply keeping an eye on the antenna which was fastened to the roof directly above. It was impossible to tell. I tried to pick her up, but discovered that she wouldn’t budge from her place.

I’d heard of people having their eyes glued to their television sets, but never their feet. It was a day of firsts.

When I came home, I took my usual place at dinner– the seat farthest from my mom. It was the lowest position in the family pecking order, but it also happened to be the only chair at the table which afforded a clear view of the family room and the television in it, which was always miraculously turned on and which I always (just as miraculously) got away with watching. I could now tune out the conversation of my older siblings and tune in to early evening network programming knowing there was a new saint in my life who was watching over me as I ate in silence, just like (as I would learn many years later) the sisters of the Franciscan Order founded by her, The Poor Clares.

I felt doubly protected by Saint Clare on the evenings my working mother was too tired to cook dinner and resorted to the convenience of pre-packaged meals. Eating a Swanson’s TV Dinner by the distant glow of our television set now seemed like a holy act, as I experienced the agony of eating re-heated peas and carrots without complaint– a supreme expression of childhood piety– so that I might move on to the ecstasy of dessert which nested between the mashed potato and vegetable compartments of the aluminum serving tray.

But such rapture was never to be found at the end of a tv dinner. The sweet portion of the meal was clearly an afterthought on the part of its creator. Frequently under baked and always flavorless, it was consumed without joy. I suffered from a rare type of frozen dinner amnesia which lead to a near-perpetual state of disappointment in this matter.

I never thought to ask her to intercede on my behalf to the Swanson’s Frozen Food Company because I wasn’t certain that was her department, so I would pray to no one in particular that there was ice cream to be had in the freezer instead*.

I saved my prayers to St. Clare for the really important stuff, like making sure The Muppet Show would never, ever be cancelled. 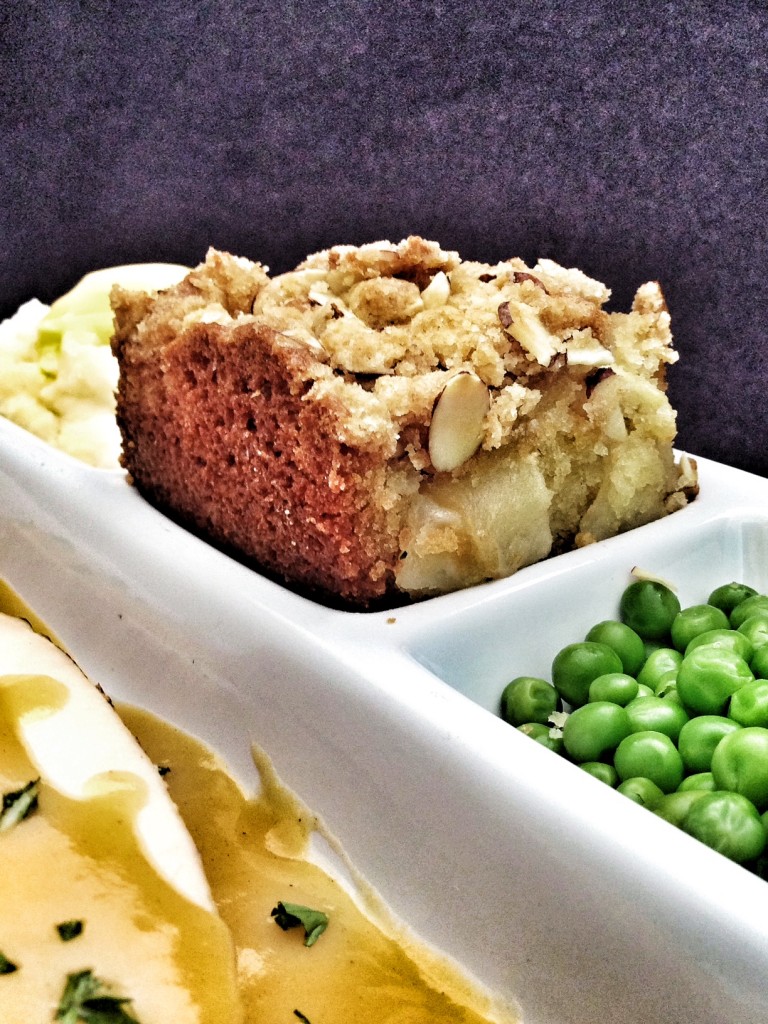 It’s clear to me that St. Clare of Assisi wields a true heavenly power, for there is no other explanation for three seasons of The Flying Nun.

In life, St. Clare of Assisi was an early follower of St. Francis, also of Assisi. She was a daughter of noble parents who shed her earthy riches to take a vow of extreme poverty, ultimately founding a religious order (The Poor Clares) who still follow her example.

St. Clare was given the job of watching over the world’s television sets in 1958 by Pope Pius XII, who based his decision on the story that, when Clare was too ill to attend Mass in person, The Holy Spirit projected the proceedings onto her bedroom wall so that she might both see and hear it happen, which gives weight to the idea that flat screen tvs are truly a godsend.

As for her divine help in creating a decent tv dinner dessert, that remains to be seen. I have what I once thought was a solid childhood memory of one of these “treats” being labeled “Roman apple cake”, but I can find nothing to confirm this as fact. My sister Lori doesn’t remember such a thing, but then again, she doesn’t remember seeing John Wayne’s testicles either, so there’s that. It has been a true test of my faith.

But that name didn’t appear out of the blue. There is such a dessert, but it is not the one from my memory. The recipe below is simply one I made up. But I’m afraid to take sole credit for its creation because it may very well be the result of St. Clare’s gentle, guiding hand coming to my aid after all these years. God’s helpers move in mysterious ways.

It is a simple dessert, but one which requires a smidgen of straightforward, honest labor, which the Poor Clares tend to look upon favorably. It is not terribly sweet, but the reward of making it with your own hands instead of pulling it out of a cardboard box to thaw may very well bring you an inch or two closer to God.

Serves: Enough. You should thank the Lord you’re getting any dessert at all.

For the Crumble Topping:

1. Make the crumble topping first by combining all of its ingredients together and mixing it with your (clean) hands, because this method is both effective and feels wonderful. Place the topping in the freezer to chill, which facilitates clumping, which is a highly desirable feature in this particular case.

3. To make the frangipane, combine all of its ingredients together and mix until they are in complete harmony. Set aside.

4. To make the cake batter, combine all of the dry ingredients together and stir. Then combine the oil, egg, milk, and vanilla extract and beat until unified. Add these wet ingredients gradually to the dry and mix until thoroughly one. There should be no apples in the batter at this point.

5. Spread about 1/3 of batter into your baking dish to form a solid foundation for the cake. Next, generously dot the surface of this layer with frangipane. You will have plenty of frangipane left over which you may then give to the poor, thus gaining Clare’s good favor and ensuring that your cake will be a success.

6. Add the sliced apples to the remaining batter, thoroughly coating them. Pour all of it over your frangipane dots and gently smooth out the top to a more-or-less even layer. Place a generous coating of crumble topping where it belongs– on top.

7. Bake on the center rack of your oven for about 1 hour and pray that it rises like a nun’s Holy Bridegroom. Should you find yourself cursed with uncertainty, check it every so often and poke at its center with your finger like a doubting St. Thomas until your faith is restored.

8. Remove from the oven when the center of the cake springs lightly to the touch and the topping is golden brown. Let both your passions and this dessert cool completely before consuming. In fact, wait even longer, if you can– this cake is better on the second day.

Serve it  alone or with lightly sweetened whipped cream. Serve to your loved ones as you watch your favorite (family-friendly) television program. Serve it to the poor. Serve it up to God, if that pleases you. Just please do something with it.

And, as you’re serving it, should any of this cake fall onto your silk tie, your lovely table linen, or your nun’s habit, you can still keep on praying to St. Clare. She just so happens to double as the patron saint of laundry**.

* Sadly, there is no patron saint of ice cream. As yet.

** This is completely true.

I write about food and am very fond of Edward Gorey. And gin.
View all posts by Michael Procopio →
This entry was posted in Sweets and the Like and tagged Patron Saint of Television, Roman Apple Cake, St. Clare of Assisi, Swanson's TV Dinners, television. Bookmark the permalink.

16 Responses to The Patron Saint of TV Dinners