Dressing Up and Playing God. 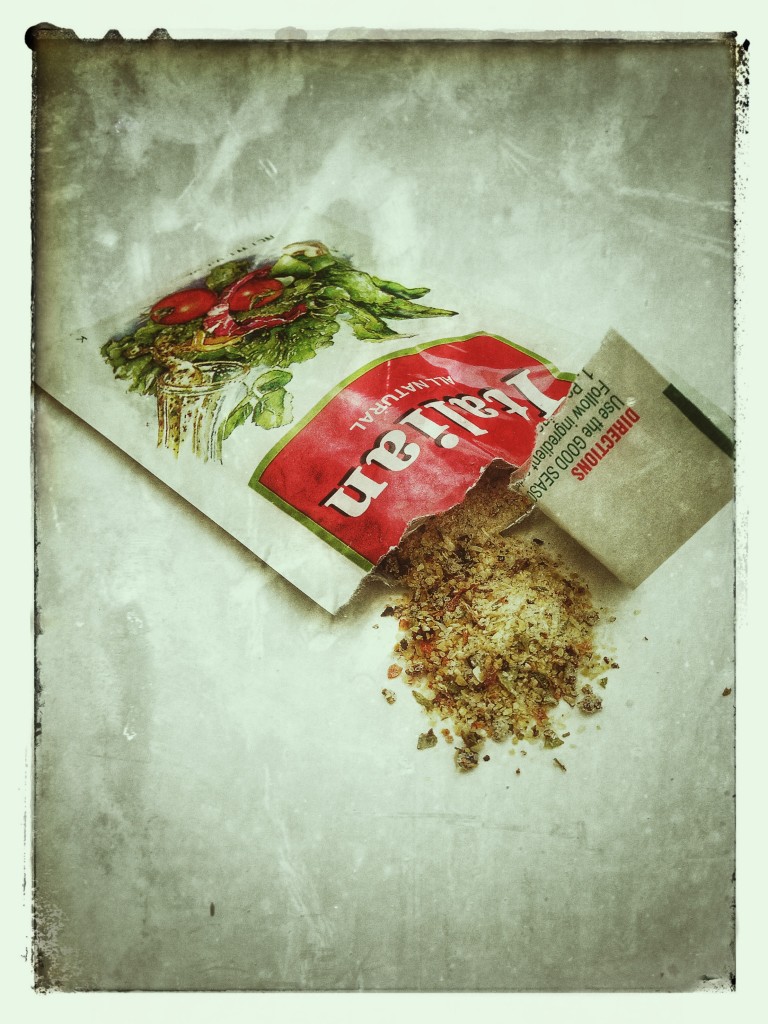 Whenever I see salad dressing being made, whether vigorously shaken in a mason jar or cruet, I can’t help but feel– for a brief moment, at least– that the End of The World is coming.

And it’s entirely my brother’s fault.

When I was studying for my Catholic First Communion, Doug took it upon himself to augment my religious education.

“Do you want to see what happens to people’s souls when they die?” he asked.  At seven, I didn’t  know many dead folks, apart from a great-uncle or two, but I’d often wondered what had happened to my recently deceased beagle, who my Sicilian father said he was “taking for a little ride*” and then returned an hour later, alone.

I followed my brother into our father’s kitchen, where not so very long before I had nearly found my own way into the afterlife.

He pulled out bottles of olive oil and red wine vinegar from the pantry cupboard, along with a cruet and packet of Good Seasons® Italian Dressing Mix and set to work on both the evening’s salad and my permanent enlightenment.

He carefully poured the vinegar up to the “V” line in the calibrated cruet which the salad dressing company had thoughtfully provided. “This represents Hell,” he said with as much gravity as his 15 year-old voice could manage. He trickled in a bit of water. “I don’t really know what this represents,” he confessed. And then he let a large amount of oil cascade down the inside of the glass vessel and said, “Now this… this is Purgatory.”

“But where’s Heaven?” I asked, noting that there were no more liquids to pour into the cruet. This caused me great concern.

“Ah, yes…Heaven.” He motioned for me to put my face closer to the container. “See the surface of the oil? That’s Heaven.”

“That’s Heaven?” I asked, my distress over the salad dressing rapidly increasing. “It looks kinda small.”

“Well, there’s not much room in Heaven because it’s only for the very, very good.” I had a very bad habit of believing everything my brother told me and he knew it. I was completely in his thrall. 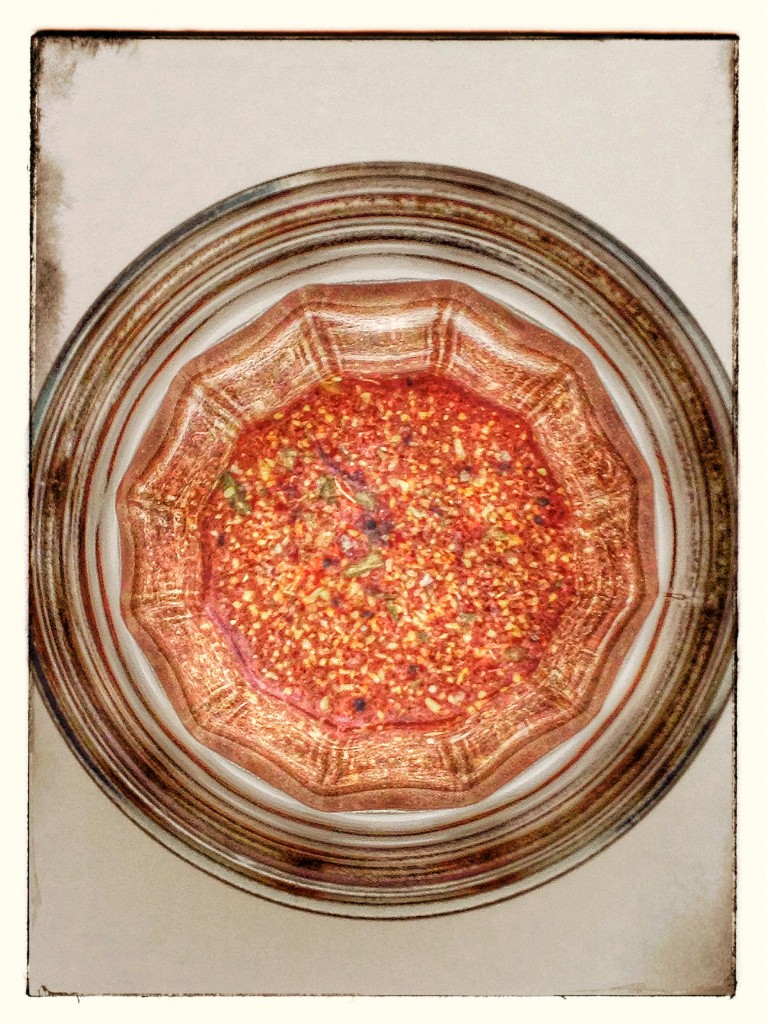 He tore open a small corner of the seasoning packet and poured out a few bits of dried onion and garlic onto his finger, dropping a single piece onto the surface of the oil. “There, that’s a good one. She made it to heaven.” He let drop the few remaining souls he had on his index finger and noted that they seemed worthy of Paradise as well.

He then began to shake the packet into the cruet with the exasperating slowness and gentleness with which he did nearly everything in life. My eyes remained permanently fixed upon the fate of all those bits of salt and spice and xanthan gum as they tumbled from the aperture of that foil-packeted gateway to The Afterlife my brother held in his fist like God himself. He knew he was playing God. It was a role I sometimes feel he thought he was born to play.

As dehydrated spirits gathered along the top, my anxiety– along with the surface tension of Heaven– increased. Masses of the imaginary dead huddled together– the smaller ones sinking to an oily purgatory, while the larger ones plunged like brimstone into a red wine vinegar Hell. By the time Doug had finished pouring out the souls of, as he put it, “all the people who have ever lived,” there were only a few left in Paradise. And most of them looked as if they were holding on for dear afterlife to the side of the container. 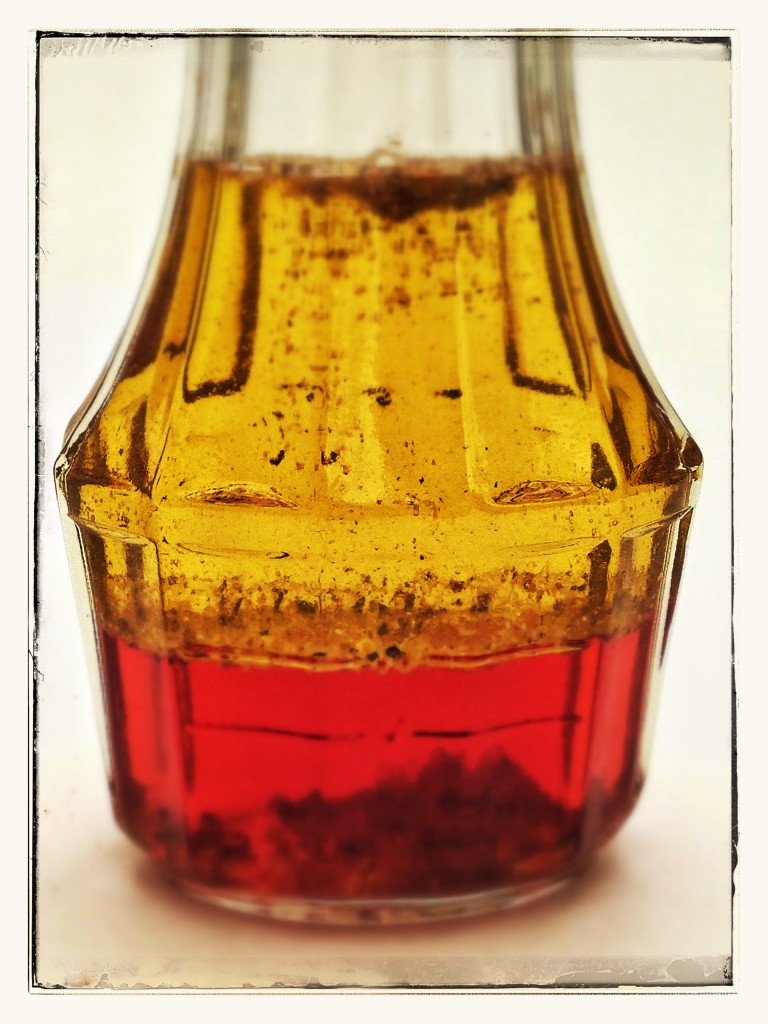 “You said ‘people’,” I said. I still wanted to know what happened to Heidi, our ex-beagle. “What about dogs?” I asked, my face about an inch from the glass which held the spiritual cosmos.

“Oh, Michael…” he said. I was too young to appreciate his condescension. “All animals are innocent creatures and are therefore without sin, so they all go to Heaven. For the first time in several minutes, I felt relieved. But the relief was short-lived. As I continued to stare at all of those Unfortunates at the bottom of the cruet, wondering what they did in life to deserve such a fate, my brother snapped on its plastic lid and snatched the bottle away from me.

He began to agitate the container with a sort of violence I hadn’t remembered seeing in him before. His cocked eyebrow and grimace only enhanced what I now imagine he hoped would be an overall feeling of menace. “DO YOU KNOW WHAT THIS IS?” he growled as he shook. Terrified, I found myself unable to reply. When he’d reached sufficient emulsification, he gently placed the cruet back onto the counter, took a couple of breaths and, his voice and countenance returning to studied benevolence, said:

I stared at the cruet and all the souls desperately trying to sort themselves out within it. My brother asked me if I had any more questions. I didn’t. He put the bottle in the refrigerator and closed the door. The lesson was over. I returned to the living room as shaken as the dressing.

When we sat down to dinner that evening, my sister brutalized the contents of the cruet again to re-emulsify the vinaigrette before it made its way around the table. She’d been through First Communion, so I assumed she knew what sort of power she was wielding at that moment. When the bottle was passed to me, I hesitated a moment before I poured the dressing onto my iceberg lettuce. I didn’t try to count the number of souls I was about to eat. In fact, I have the feeling I tried to put the idea of being a soul-eater out of my head entirely. But when I was offered salt and pepper, I know I declined.

The thought of spicing up my salad with even more ground up, hapless spirits was almost too much for my own soul to bear.

*For those of you unfamiliar with this phrase, it is a Mafia euphemism for a car trip in which something invariably unpleasant happens to the invitee. And, incidentally, my father deeply loved that dog. It was a matter of black humor used to mask his own sorrow and prevent his child from indulging in a screaming fit of hysterics.

I write about food and am very fond of Edward Gorey. And gin.
View all posts by Michael Procopio →
This entry was posted in Rants and Stories, Salad and tagged brothers, first communion, Good Seasons, Judgement Day, salad dressing, souls, The Afterlife. Bookmark the permalink.

18 Responses to Dressing Up and Playing God.