The Dessert That Dare Not Speak Its Name 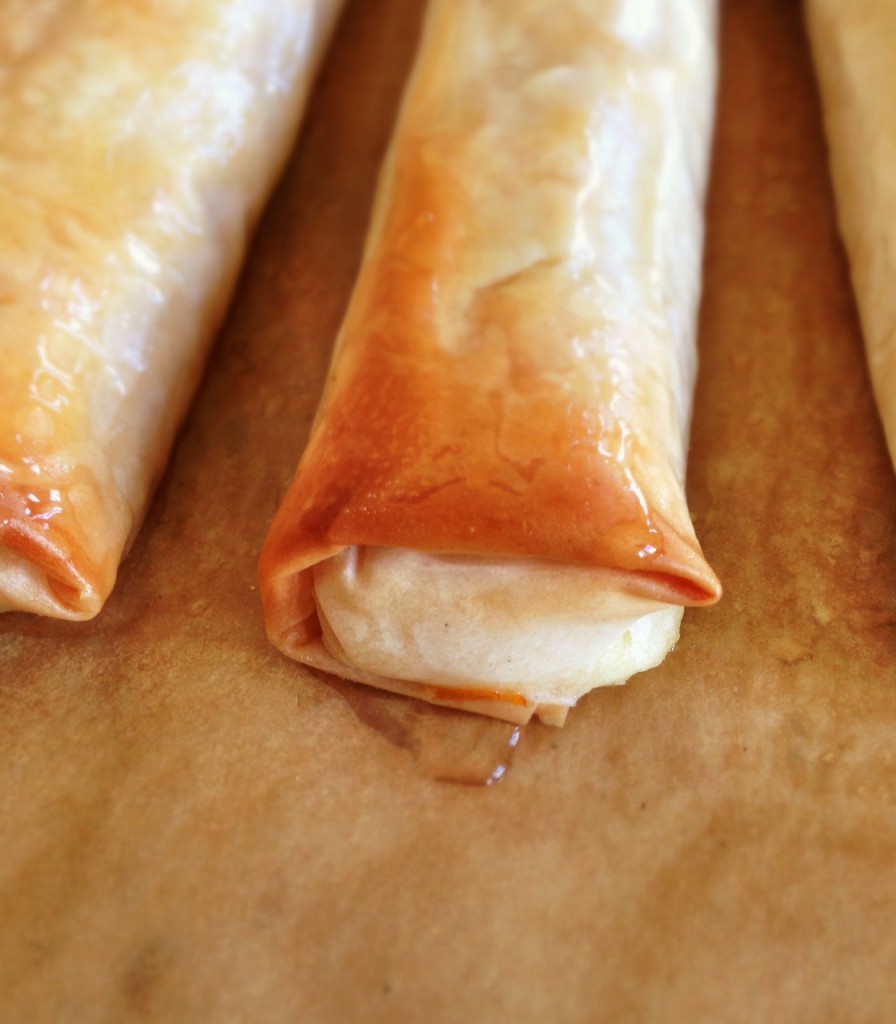 The dessert in question is called Galaktoboureko and, to be more precise in my titles, it isn’t so much that it dare not but rather cannot speak its name because it is a pastry and therefore does not possess the capability of speech.

“Galaktoboureko” also happens to be one of the most challenging words for my restaurant guests to pronounce and the one I love to watch them struggle with the most. Some people call it “galactic burrito” because of its shape and the basic sound of the word. Others more cheekily ask for a “galactic booty call” for reasons I imagine are too personal to ask. But most people just point at the menu and ask for “the custard one with the really long name.”

Galaktoboureko also happens to be my favorite item on our dessert menu. As something which must be eaten on the day it is made, any remaining pieces of this custardy pastry are left out at the end of the night for the staff to devour– usually cold and sometimes beginning to limp and seep. I’ll gladly eat them at any temperature or state of turgidity.

For our guests, galaktoboureko is formed into what is essentially the shape of an egg roll, served warm, two on a plate, with crème fraîche ice cream and a seasonal spoon sweet.  It is a remarkable combination but over the years I’ve become so accustomed to shoveling them into my mouth unadorned that it’s hard for me to think of them served any other way but plain.

I have no idea why I decided to make galaktoboureko at home, given the fact it’s always available to me at work and prepared by people who make them on a daily basis and therefore much better than I do. But the more I thought about making them over the weekend, the more I realized how much I have taken them for granted. They have been an accepted part of my life for longer than I care to remember, but know that one day they won’t be. And that thought made me take pause and consider the other things in my life I might assume would always be there.

I talked to both of my parents over the weekend and found myself missing more than I normally do. Each conversation was longer than usual, which made me happy, but I couldn’t help prevent an acute sadness from seeping in. They’re both essentially fine, but they’re also both in their 80s. I couldn’t help but ask myself if, like the galaktoboureko, I’ve taken them for granted, too.

And the answer was: of course I have. What child hasn’t? I have the bad habit of wanting to believe that all the important things which have been with me since the beginning will be with me forever. But all good things eventually come to an end: relationships, The Dick Cavett Show, decent airline customer service, careers. If you can think of it, it will more than likely disappear sooner or later, whether you want it to or not.

If someone you love, whether it be a grandmother or father or spouse– anyone really– has a recipe they are famous for, or at the very least, one you strongly associate with them, learn it from them now if they’ll let you. Find an excuse to get together and cook. When they are no longer in your life, you can make these things for yourself and feel their presence.

You may find it strange that my premature nostalgia has found me making something from my workplace, but I don’t. After the many years I’ve spent there, it’s become something like a home to me, inhabited by something very much like a family. Dysfunctional at times like any family, but a family just the same. And like any home and family, child that I am, I will leave it someday.

So I figure I’d better start learning to prepare some of these things on my own because I won’t have mommy or daddy or a team of pastry cooks to make them for me forever. And, for lack of a better idea, learning to make galaktoboureko seems like as good a place as any to start. It’s a word I’m much more comfortable pronouncing than the word “goodbye.” 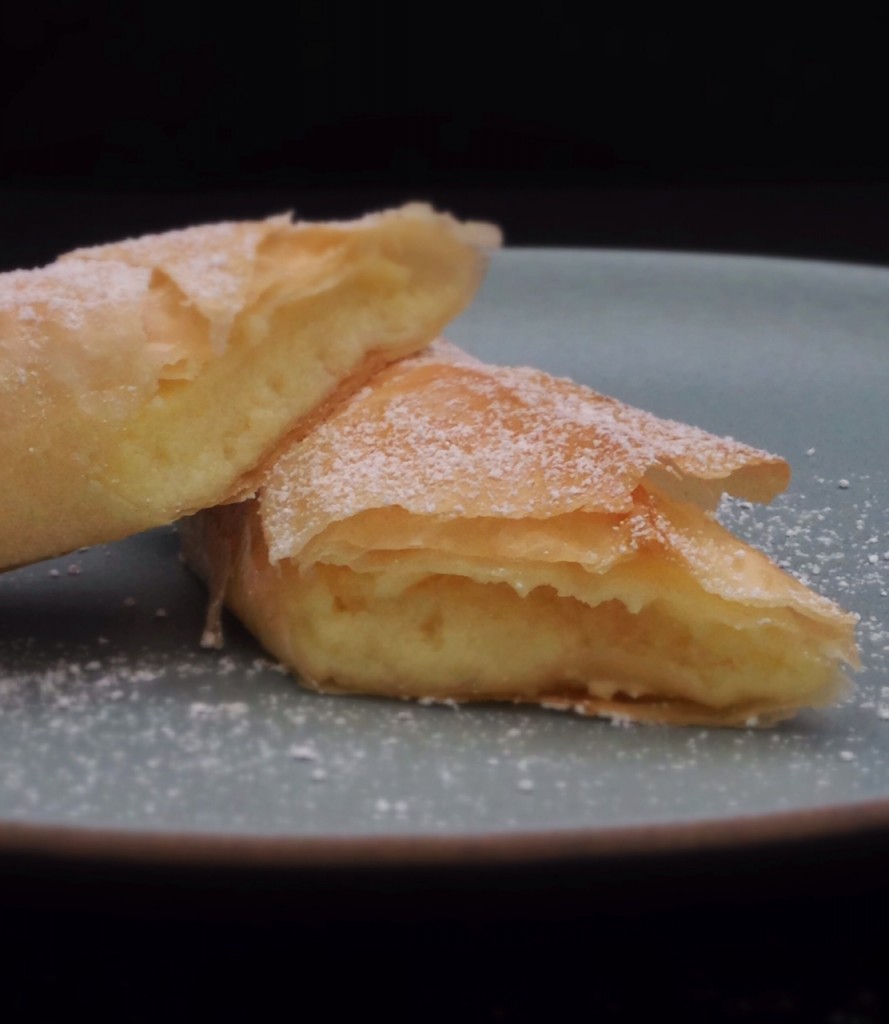 Traditionally, you would find this dessert prepared deep-dish style, with layers of phyllo on the bottom and top and as much semolina custard as you can cram between. But I happen to like the elegance and portability of the rolled version. It is the way I was introduced to the dessert and it’s one thing I prefer not to change.

I also respect galaktoboureko‘s ephemeral qualities. Phyllo dough envelops and protects the custard during baking, but it is fragile. It tears and shatters easily and loses its crispness within hours. It must be eaten the day it is made.

Makes 12 to 16 “galactic burritos”, depending upon how much custard you decide to cram into them.

1. Thaw your phyllo in your refrigerator overnight

2.  In a small saucepan, combine milk, half and half,  1/4 cup of sugar, and if you’re using vanilla bean, add it now, scraping the seeds into the milk. Bring to a simmer and make certain the sugar is dissolved.

3. Meanwhile, whisk together the other 1/4 cup of sugar, semolina flours, egg, and salt until it is a uniform mush. Whisk about half of the hot milk into the semolina mixture to temper it, making certain to keep up the motion to prevent curdling. Return this mixture to the milk remaining in the pan, bring to a boil and whisk constantly until the custard is smooth and thick and therefore custardy. When it bubbles like molten lava or those delightful mud pots at Yellowstone National Park, remove it from the heat, place into an awaiting bowl, cover the surface with plastic wrap to avoid the creation of a top skin, and let cool. 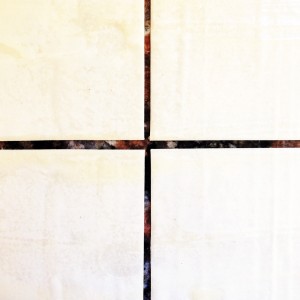 4. To assemble the galaktoboureko, place 1 sheet of phyllo on a large clean work surface with the short side facing your (hopefully) apron-covered crotch. keep the remaining phyllo under plastic wrap covered with a lightly dampened towel to prevent them from drying out. Brush the phyllo with the clarified butter (which I assume you have melted and are not attempting to brush said phyllo with hardened, cold clarified butter), brushing from the center of the sheet toward the edges. Top with two more sheets, brushing each with butter in exactly the same way. Cut the layers of phyllo in half vertically and horizontally to make 4 rectangles.

5. Place the cooled custard into a pastry bag fitted with a plain 1/2-inch tip (or simply dump it into a large freezer bag and cut the correct amount off one of the corners to improvise– it works like a charm). Pipe at least 2 tablespoons of the delicious goo in a more or less straight line parallel to the short side near your nether-regions, leaving a 1 inch border along the sides and top of the phyllo. Fold the short side of the phyllo over the filling, tucking it under the filling, then fold in about 1 inch along each side of the longer sides. In other words, pretend you are making a burrito. Continue rolling until you have a log that is about 4 1/2 inches long. Repeat with the other three awaiting phyllo rectangles. Transfer to a parchment-lined baking sheet and repeat until you have used up all of your custard. Or all of your phyllo. Or until you get tired of doing this. Whichever comes first. Cover the baking sheet and refrigerate until well chilled.

6. To make the syrup, unceremoniously dump the 2 tablespoons of sugar, 1 tablespoon of water, the lemon juice, and orange zest into a small saucepan. Swirl over medium heat until it seems appropriately glaze-like. Let cool and add orange flower water.

7. Pre-heat your oven to 500° F. Pierce each log with the tip of a paring knife in 4 strategic places to allow steam to vent during baking. Otherwise, you will experience undramatic but rather upsetting galactic explosions inside your oven. Bake until golden brown. Start watching them like a hawk after 8 minutes. Remove from the oven and immediately glaze they pastries with syrup while they’re hot.

8. Serve them warm to people you’d prefer not to take for granted, or learn nothing from this exercise and let them stay out all night untouched. Just don’t expect someone else to make them for you the next day.

*Thank you Tony, Memo, and Harry for your kind donations of semolina and orange flower water.

I write about food and am very fond of Edward Gorey. And gin.
View all posts by Michael Procopio →
This entry was posted in Sweets and the Like. Bookmark the permalink.

22 Responses to The Dessert That Dare Not Speak Its Name