Posted on January 8, 2014 by Michael Procopio 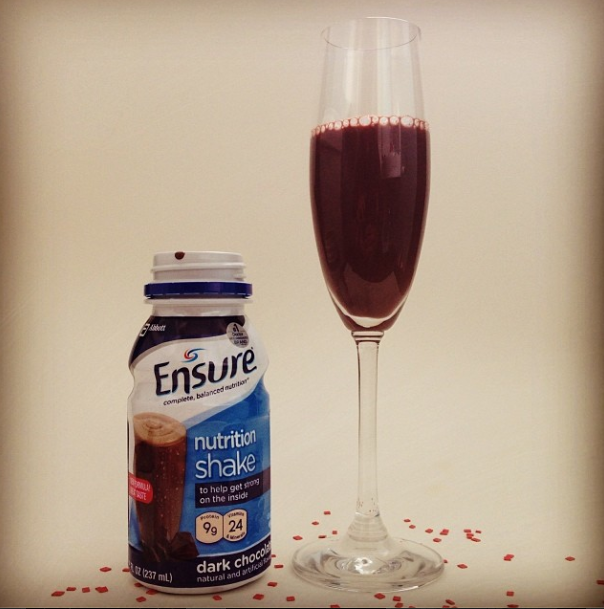 Rather than toss confetti with friends at the end of 2013, I found myself alone in my bathroom, tossing up the contents of my stomach.

When I’d finished this involuntary abdominal exercise at a quarter to midnight, I found myself in a kneeling position on the cool tile, examining the contents of a white porcelain toilet bowl as a Greek might examine his coffee grounds in a white porcelain cup. Was vomit a viable medium for fortune-telling ? I turned on the light to have a better look. There wasn’t much to see. I’d had this bloody stomach virus for nearly three days and had eaten very little.

So much for my future, I thought. I brushed my teeth, washed my face, and went to go sit down in the living room.

I reflexively poured myself a finger or two of bourbon to drink at midnight but immediately thought better of it. I set the tumbler on the table beside me, but the vapors rising from the glass were too tempting. I poured the whiskey back into the bottle. Feeling depleted, I found myself in the kitchen reaching for a small container of Ensure nutrition shake instead. Too tired to agitate it properly,  I just poured it into a champagne flute to be mockingly festive. I toasted the New Year by myself with eight ounces of viscous dark chocolate liquid which promised me nine grams of protein.

“Another year down the toilet”, I said to myself as I raised my glass to bid the year adieu. “And good riddance to a shitty 2013.” But as soon as I said it, I realized how absolutely wrong I was.

2013 was a great year, wasn’t it? Yes it was. Or rather, it was a mixed bag of good and bad, but all years are like that. For me, it was the year of being careful what I wished for.

For example, I had wanted to lose a few pounds over the Holidays and my wish was immediately granted. Upon reflection, I should have been more specific as to how I planned to go about it. But the wish fairy gave me a three-day stomach virus and presto! I can now fit into most of my pants again.

And my wishes were granted for this little blog, too. It could not have been more successful, critically speaking, than it was in 2013. In food writing terms, I hit the triple crown– an IACP nomination for Best Culinary Blog, a James Beard Award nomination for Humor, and a second, unsolicited entry into the Best Food Writing anthology. The fact that I didn’t win either award turned out to be a blessing– the experience taught me how to be a good loser (something I needed to learn) and the sheer volume of love and support I received from friends and colleagues was overwhelming and much more gratifying than any medal or certificate or blog badge ever could be. And I say that honestly.

But again, I should have been careful what I wished for. All those lovely, shiny honors have their dark side, too. To be fêted and congratulated is wonderful, but when the party was over and I saw that my life didn’t magically change, I felt ridiculous for thinking it would, and depressed because it didn’t. For a while, all I heard was “book, book, you must write a book and you must write it now.” I dragged my heels. The joy of writing diminished. I stopped doing it for myself and worried that I needed to cater to some imaginary, larger audience. I resisted the advice of more than one literary agent. I managed to talk myself out of writing the books I really wanted to write, convincing myself that they were too “out there” and would never sell.

My depression deepened; I wrote even less. I felt as if I had no real future in writing. For a while, I contemplated not doing it at all. But I forced myself to write something once a month out of fear of disappearing altogether.

But I am grateful that I have not disappeared and amused at the fact that it took me being hunched over a toilet to help me realized that. When I saw next to nothing in the bowl, my first thought was “no future”. Upon reflection, however, I think it shows that my future simply hasn’t been written. In the stars or in vomit or otherwise.

It was an appropriately cathartic ending to a roller coaster year.

I spent New Year’s Day feeling happier and much lighter and sought out the company of friends to spend the afternoon with. The afternoon with them turned into evening and all the while my head filled with new ideas, new plans, new goals. It was time very well spent. I promised myself I will write more in 2014. Not exclusively for the blog, but I will write regularly– on projects I want to do. To please myself and to help me make more sense of the world. If it pleases others, that will be an added bonus.

I’ve come out of 2013 a smidgen wiser, a little more experienced, and even a tad thinner. And I somehow managed to leave the depression of last year where it belonged– flushed down the toilet.

I can’t wish you nothing but success and happiness in 2014. That’s far too unrealistic. Instead, I wish you an interesting year. One complete with wish-fulfillment and the wisdom to successfully navigate the sometimes dangerous rapids of those wishes fulfilled.

I write about food and am very fond of Edward Gorey. And gin.
View all posts by Michael Procopio →
This entry was posted in Uncategorized and tagged depression, New Year, nutrition shakes, resolutions, stomach virus. Bookmark the permalink.