Eating Their Cupcakes, Eating My Words. 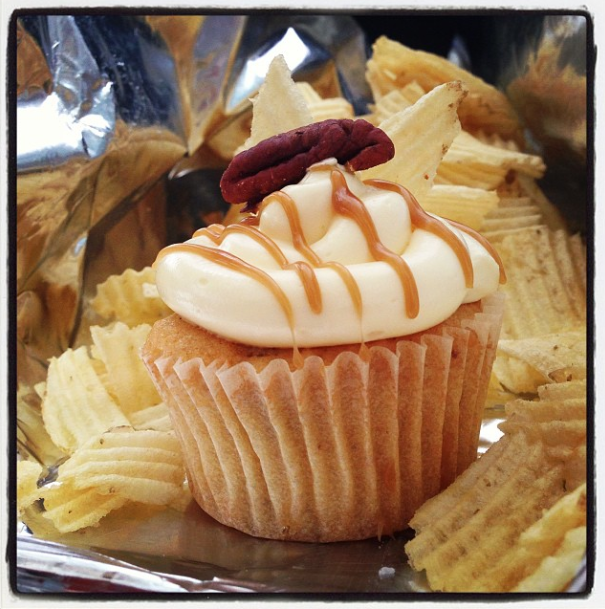 Anyone who knows me can tell you that I’ve never harbored much love for cupcakes.

At best, I’ve regarded them as a symptom of a tragic disease which strikes thousands of American women in their early 30s, causing them to put on yoga pants and congregate in the produce aisles of Whole Foods Markets to discuss their toddlers’ athletic achievements.

I’ve devoted a lot of energy to the avoidance of these insidious pieces of fluff, going so far as to block the word “cupcake” from appearing in my social media streams to protect myself from infection.

But then, at a bourbon-soaked Kentucky Derby party in Brooklyn not so very long ago, I met a young married couple who would cause me to change my attitude towards these hand-held pastries. To look at them, you’d never guess that these two people would have anything to do with cupcakes: he was a great, bearded bear of a man; she, a woman who spoke in four-letter words and owned a purse in the shape of a boom box that played actual music. I liked them. And the fact that the word “cupcake” was not mentioned at all made me like them all the more.

Imagine my surprise when I discovered a short time later that this couple, Matt and Allison Robicelli, were two of the most famous cupcake makers in the universe. And that they wrote a cupcake cookbook. Which was immediately sent to me.

Imagine my shock when I opened the book and realized that it was one of the cleverest, most deeply entertaining cookbooks I’ve read in a very long time. 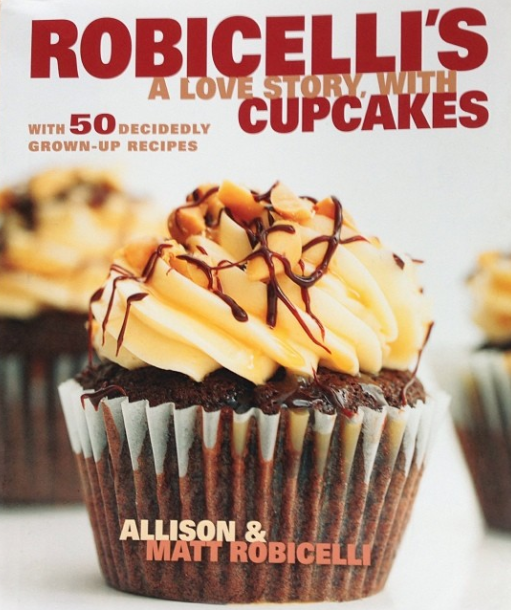 Robicelli’s: A Love Story, With Cupcakes is exactly that– a love story told in cupcake form. Many of the recipes expand upon Allison’s essays and somehow manage to distill the joy, frustration and tears involved in the building and sustaining of a relationship into well-balanced, edible fare. (“A Love Letter To Compromise” p.191 and the resulting recipe for Buffalo Chicken cupcakes on p. 199 are a prime example.)

The book’s often serious essays carry us from the initial meeting of Allison and Matt, up to the present day (or at least up to the time of printing), but the recipes carry us through some delightful (and sometimes surreal) flights of pop cultural fancy. Some examples include: 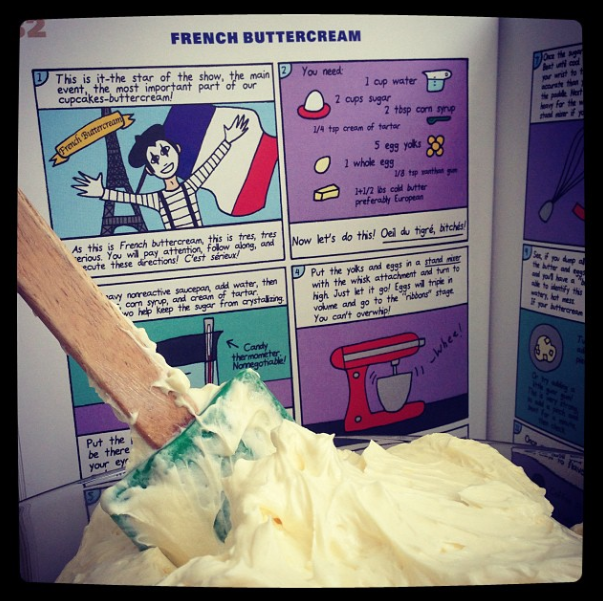 * A cannoli-themed cupcake dedicated to Dom Deluise (p. 43)
* A cupcake inspired by an Irish Pub drink which in turn was inspired by a favorite IRA terrorist activity (p. 51)
* A series of desserts created in honor the entire cast of The Golden Girls (p.175-189)
* A cartoon Gallic mime who walks the reader through the technique of making French buttercream.

I could go on, but I don’t want to give everything away.

I found myself so enchanted by this book– the refreshingly frank essays, the ingeniously off-beat recipes, the delightful stream of four-letter words– that I wound up doing what I had previously considered the unthinkable. I broke down and made cupcakes (Pecan-Potato Chip p.145 and pictured above) which I then proceeded to share with my co-workers.

When my Robicelli-inspired handiwork had disappeared, I thought to myself, “I don’t know who the hell I am anymore.” And then I realized that I was oddly fine with that. I didn’t die. I made 12 people happy. And I caused another 12 to be upset that they didn’t get any. In all, it was a very good work day.

When it was over,  I thought for a moment about what Allison wrote in her previously-mentioned love letter to compromise:

“[I]t isn’t just ceding ground and giving in. Compromise is pulling yourself out of your comfort zone, seeing something from another perspective, thinking differently. Compromise, as hard as it is, helps you to grow…”

And you know what? Allison was right. Because of this book, I somehow managed to pull myself out of my comfort zone of zero cupcake tolerance, allowed myself to see these once-reviled, calorie-bombs of cute from the perspective of two people who have a deeper understanding of them than I probably ever will, and found myself thinking differently about them. All with a shocking lack of resistance on my part.

And the best thing of all? I finally– finally— found myself able to sit back, relax, and enjoy a fucking cupcake.

I write about food and am very fond of Edward Gorey. And gin.
View all posts by Michael Procopio →
This entry was posted in Books I Love and Loathe. and tagged cookbooks, cupcake phobia, cupcakes, robicelli. Bookmark the permalink.

29 Responses to Eating Their Cupcakes, Eating My Words.