When Life Gives You Melons…

Posted on September 12, 2013 by Michael Procopio 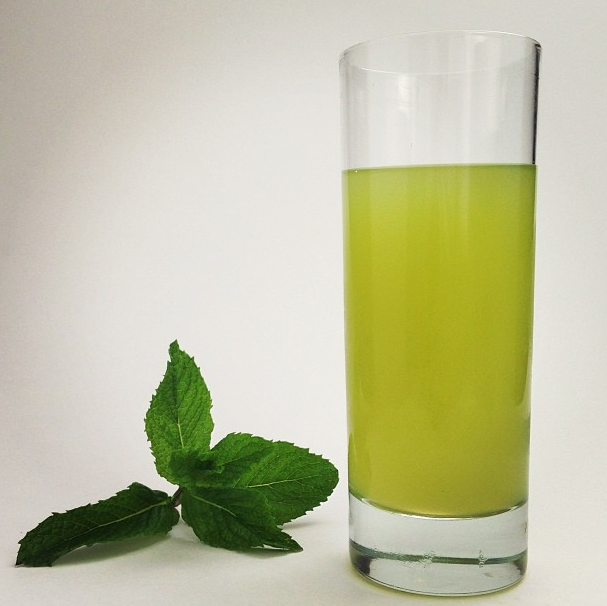 I am a highly selective reader. And listener. By this, I don’t mean to imply that I have discerning taste in literature and music.

Instead, I mean that my brain often prefers to process visual and aural information in ways it thinks I may find either more palatable or more entertaining than the original.

I once wondered aloud to a date about a billboard exhorting women to get Mmmmograms. He then proceeded to wonder aloud as to what in God’s name I was talking about. I pointed to the sign. “It says mammograms. Maaaa-moh-grams” he mouthed slowly and piteously. I looked again at the sign. He was right, of course and I knew that my lexical mirage was due in part to the fact that I was hungry.  But still I much preferred my version of the message, which implied that women might visit their doctor for a necessary prescription of chocolate or caviar, rather than to have their breasts smashed and biopsied.

I’m fairly certain that was our last date, but I couldn’t tell you the fellow’s name if my life depended on it because my brain has apparently found that particular bit of information too unpleasant to process.

In terms of mishearing things, I can tell you I’m extremely grateful that, as a child, I was never singled out to perform “The Star Spangled Banner” in front of a large stadium crowd because I am almost certain most Americans would be distressed to hear how their flag survived a cannonade of “tampons bursting in air” above it.

I’ve since learned the proper lyrics, but the original imagery will never, ever go away. And that’s fine by me, because I happen to think my version much more dramatic than the original. And so much more colorful.

At work the other evening, one of our sous chefs engaged in a bit of verbal dyslexia as he was telling the waitstaff about dessert specials– announcing that we had a trio of chilled lemons available, should any of our guests feel like having a bit of fruit. By the time he corrected himself, the mouths of everyone in the room had already puckered at the thought of eating slices of cold Eurekas and Meyers. He’d meant to say melons: Sharlyn, Crenshaw, and one with a Spanish name I’d never come across before– Piel de Sapo. My not-at-all-fluent-in-Spanish brain translated it into something I could understand. 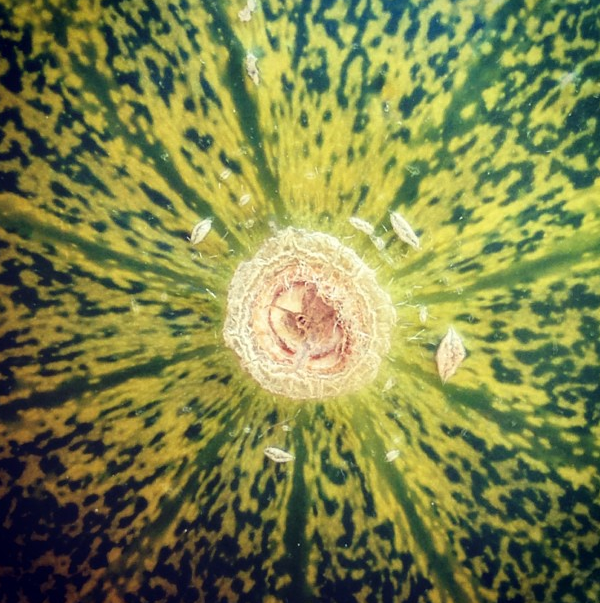 One minute, I find out we have no cold lemons to sell to our guests and the next I’m told we’re offering them fruit suffering from phrynoderma instead.

How much lovelier– and more appropriate– it would have been to serve up melon named for a Lesbian poet in an upscale Greek restaurant? Instead, we had nothing but cold-blooded amphibian. Knowing that the likelihood of horticulturists developing, growing, harvesting, and delivering the melon I wanted before service was minimal, I swallowed my disappointment and swore I’d turn this personal misfortune into something positive.

Because as the old adage says, “When life gives you melons, make melonade.” 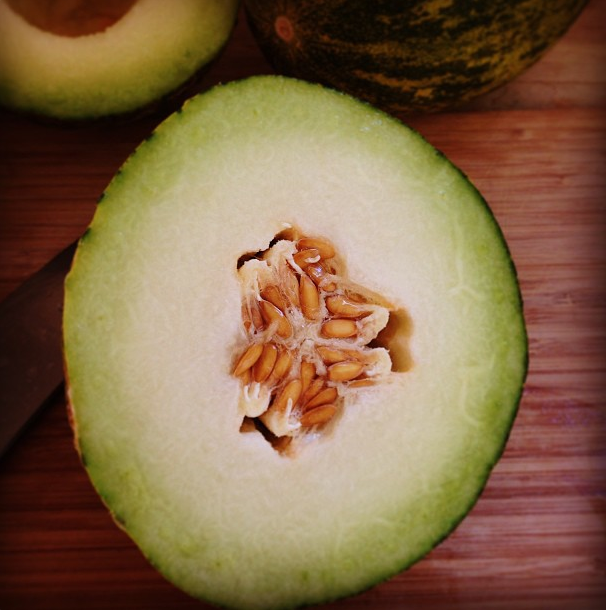 There are so many melons one could possibly squeeze for juice, but I am currently loving Piel de Sapo. We sometimes eat it like candy at the end of our work shift when it’s in season. It’s flavor is sweet and subtle and vaguely cantaloupe-like. Apparently, it is also referred to as Santa Claus melon, because it can be stored for so long that it can sometimes keep until Christmas.

But I still prefer to call it Piel de Sappho because melons are so ripe for female anatomical comparison– undeniably mammarial when whole, unspeakably vaginal when pried open. The only thing I have trouble reconciling is the fact that this melon has a thick skin, which doesn’t quite jibe with the legend of this famed Lesbian* poet of antiquity hurling herself off a cliff when she found her love unrequited.

But at least it does imply a sweet and tender soul, which Piel de Sappho has in spades.

1. Cleave your melons, scoop out the seeds with a spoon, remove the skins with a sharp knife, and save only the flesh, which you will then slice into pieces small enough to be shoved into the feed tube of your juicer (You really should have a juicer if you want to do this).

2. Pour the juice into a large container– you may get up to 3 pints of liquid from two melons. Cover and place in your refrigerator to chill and allow for the remaining melon solids to separate from the juice.

3. In the meantime, place 1 cup of water and 1 cup of sugar into a saucepan and heat over medium flame until the sugar is dissolved. Now take your clean mint, abuse it, and tear it to pieces, letting them fall as they may (somewhat carefully) into the sugar syrup. Stir and mash the mint all you like, cover and set aside to cool.

4. Remove the juice from the refrigerator and strain it either through a fine-meshed sieve, cheese cloth, or both.

5. To serve, pour the juice into a large glass and taste. Is it sweet enough? Possibly, but add a teaspoon or two of the subtly-minted syrup and give it a stir. If you want to keep things simpler and do not want any extra sweetness, crumple up a few fresh leaves of mint and toss them into the juice, giving it all a good, hearty stir. If you want your beverage even more straightforward, do nothing and just drink the damned juice.

Or send a batch to a friend– it will make for one delightful mmmm-o-gram indeed.

If you add lemon juice (or lime, for that matter) you will end up with a jumble of letters which will taste of little more than acid and murky water. If you add gin, it will taste terrible. The flavor of the juice is so subtle that one should do as little as possible to it. If your melons are hard and flavorless, the best thing to do with them is hurl them from the nearest cliff. And then learn how to properly select a ripe melon.

* There is no known proof that Sappho a) was homosexual or b) that she ever hurled herself off a cliff. Very little about her is known beyond the fact that she was from the island of Lesbos, and was considered one of the greatest of the ancient Greek poets– no small feat in a time when women of good families were pretty much never allowed to leave the house.

I write about food and am very fond of Edward Gorey. And gin.
View all posts by Michael Procopio →
This entry was posted in Liquids and tagged dyslexia, melonade, melons, piel de sapo, Sappho. Bookmark the permalink.

8 Responses to When Life Gives You Melons…