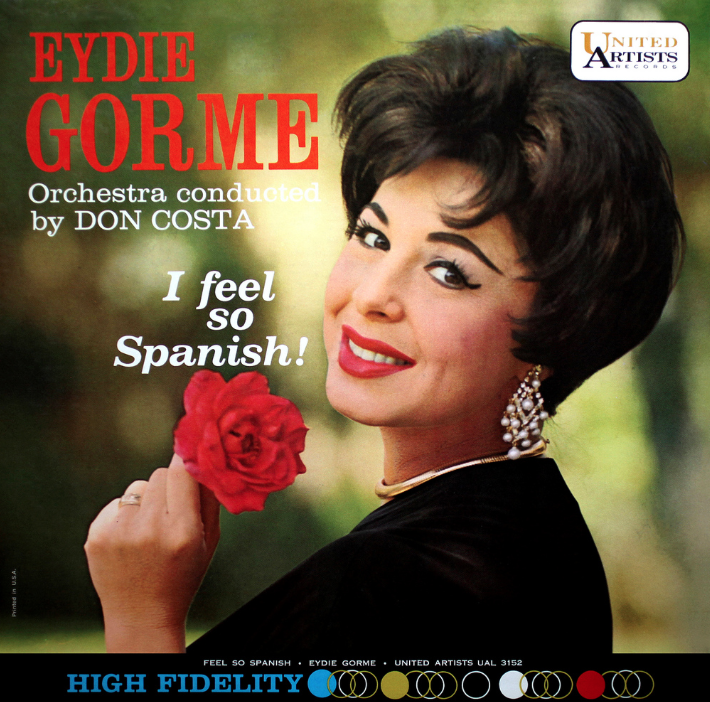 Eydie Gorme died this week and the news has made me rather wistful. Her music didn’t play an enormous role in my development and I would have to consider myself a rank amateur in terms of assessing her career, but she had a way of popping in an out of my life which always made me happy. And that is always something to appreciate.

Her voice featured annually in the Holiday soundtrack of my childhood when The Goodyear Tires Great Songs of Christmas album would get dusted off, placed on the hi-fi, and I would listen to her giggle through the lyrics of “Sleigh Ride” with her husband Steve Lawrence. It was my second favorite song on the album, right behind Maurice Chevalier’s Gallic-scented version of “Jolly Old Saint Nicholas“.

From time to time, I’d see her on television singing some perky song or other with her husband, but I never paid much attention. Most likely because I had no interest in relationship-themed tunes. But they always seemed to me a very happy couple– playfully combative, but always very loving, which in my experience seemed an utterly alien concept.

On her own, Eydie Gorme scored hits with her Spanish language albums featuring Trio Los Panchos and a song in which she takes no personal responsibility for her marriage and inevitable multiple pregnancies, crediting instead an early 1960’s Brazilian dance craze. But she was never more famous than when she teamed with Steve Lawrence, nor was he ever as famous than when teamed with her. After awhile, they seemed to fuse together in the public mind as Steve & Eydie. No last names required.

And nowhere did their fusing ignite more sparks than in Las Vegas, where the were married, lived, raised children, and performed for more than 50 years. They were the uncrowned King and Queen of Vegas and it was there that I shared my most intimate moment with The Queen. 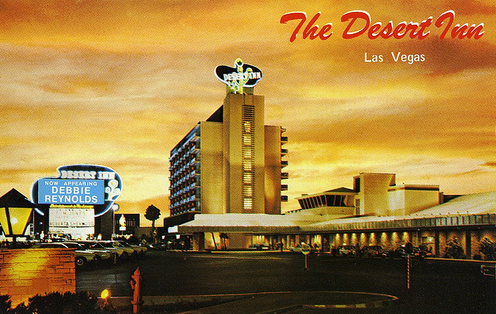 Wanting to visit The Desert Inn one last time before it was blown to bits, my father took me to see a show in the hotel’s theater. It was a nostalgic  gesture– my parents lived in Las Vegas from 1957 to 1960, during what is often called the city’s Golden Age. The musical performed that evening was Guys and Dolls and starring such equally nostalgic performers such as Maureen McGovern (the voice of Oscar-wining disaster film themes songs of the 1970s), Jack Jones (A famous singer of the 1960s who was born on the same evening his even-more-famous father recorded one of my favorite songs ever), and Frank Gorshin (The Riddler from the original Batman series). It was going to be a night of high-kitsch Vegas entertainment and, thanks to my father slipping the maître ‘d a bill of an undisclosed denomination, it was going to be a night of high-kitsch Vegas entertainment with an excellent view.

And then something happened which made me doubt my own vision: 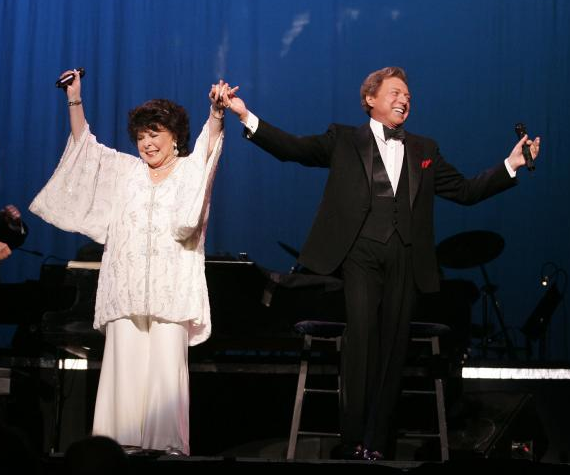 One martini into my two-drink minimum, the orchestra burst out in one staccato and one long note in an unmistakable “ta-da!”. A spotlight hit the lobby door. And there– temporarily blinded and slightly embarrassed– stood Steve & Eydie.

“You have got to be kidding me,” I said to my father, wiping off the gin that had splashed onto my sport coat because the music had startled me mid-sip. But no one was kidding anyone. Mr. Lawrence and Ms. Gorme were led to their table by the maître ‘d amid geriatric applause– a cozy banquette located directly behind ours. We were roughly less than a Vegas showgirl’s-length (without headdress) from the King and Queen of Old Las Vegas. The cocktail waitress brought our second drinks, I swiveled in my seat to look at Eydie and smiled. She returned my greeting and then the room seemed to go dark.

The room went dark, of course, because the performance was about to begin. But I’d forgotten all about it because, as far as I was concerned, the show was already happening behind me and I momentarily thought my vision had simply dimmed for dramatic effect.

It is still how I choose to remember it, which is just as well because what was happening onstage was only slightly less entertaining than watching an amateur production of Paint Your Wagon performed by asthmatics. Except for Frank Gorshin. He was charming. Half way through the poorly choreographed “If I Were A Bell” number, I could hear a dental click of disapproval behind me and quietly turned around to hear Eydie Gorme sigh, “Oh, Maureen…” I locked eyes with her in the dim faux-candlelight and she seemed embarrassed that anyone other than her husband had heard her. But I responded with pained look, slow nod, and dramatically-mouthed-but-entirely-silent “Oh, I know…”

I had hoped the subtext of my gesture expressed the message “I now know your secret and will carry it to my grave”, but such things are extremely difficult to convey in low light with a mediocre musical number performed by under-rehearsed former celebrities happening behind you, so I doubt very much it was taken that way. Instead, she just looked at me for a moment and heaved a visible sigh. I turned myself around again and that was that.

I finished watching the show, but realized that what was left of my hour-old martini was now warmer than my enthusiasm for what was happening onstage. My father, however, seemed to be enjoying himself. I gulped down the rest of my drink and took solace in the knowledge that I wasn’t alone in my lack of dramaturgic joy. I had formed a strong but temporary bond of mutual disappointment with another member of the audience. And not just any member, of course, but with the Queen of Las Vegas herself. 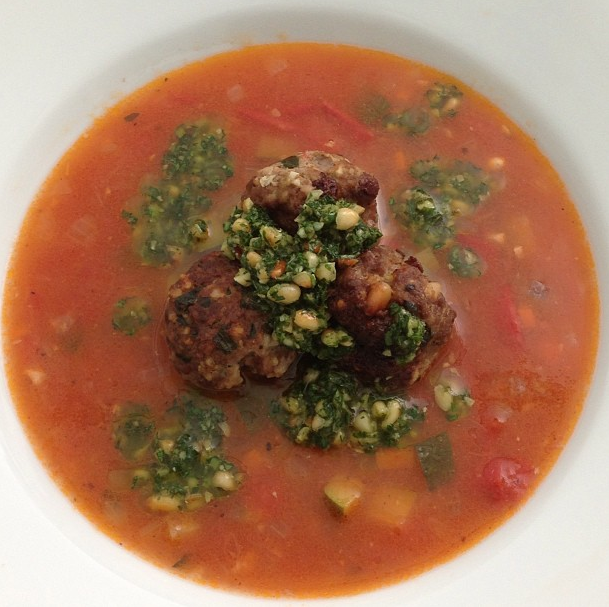 Because, as she clearly states on her album cover, “(She) Feel(s) So Spanish“.

Eydie Gorme was quite an interesting lady. A Bronx girl of Italian and Turkish Sephardic stock; fluent in Spanish and Judeo-Spanish Landino. She worked as an interpreter at the UN. She won a Grammy Award. She had a marriage which lasted for 55 years. And now she’s gone.

I will more than likely never know what it’s like to be with someone for more than half a century, but if I were, I imagine I’d like for us to go at the same time. A home gas leak in the winter time might be lovely because then we would both die in bed in our sleep and keep fresh until our intertwined bodies were discovered. A plane crash might be lovely, too, because it would give us a couple of minutes to say goodbye before dying on impact. But I think my favorite way to go might be Thelma & Louise-style– either by our own choosing or by way of inaccurate satellite navigation, which would send us off a cliff edge together, holding hands until we reached the bottom and our mutual end.

The following recipe is not what I would call “precise”, except perhaps for the meatballs, which are inspired by Joan Nathan’s New York Times recipe. I thought it more appropriate, Steve & Eydie-wise, to blend two separate meats so as to make them ultimately inseparable. The addition of currants makes them sweeter, which is also appropriate.

Makes about 24 Turko-Italo-Judeo-Iberian meatballs and serves about 4.

For the pesto-like condiment to serve on top for a hint of added glamor:

1. In a medium-sized bowl, gently combine the lamb, beef, egg, matzoh meal, garlic, pine nuts,  currants, cumin, cinnamon, salt, and pepper. Let it ooze through your clean fingers like warm Play-Doh. Form into walnut-sized balls. Heat the olive oil in a heavy skillet over medium-high heat and, in 2 batches of 12, brown the meatballs, top and bottom, but do not cook them through. About 3 minutes per batch. Drain the meatballs on a paper towel-lined plate and set aside.

2. To make the soup, drizzle the bottom of your soup-making vessel with olive oil and turn and heat over a medium flame. Add the onions and carrots, and sauté them until the onions are translucent (about 5 minutes). Do not brown your vegetables, please. Add the garlic and cook for another minute longer.

3. Pour chicken stock over the sautéed root items, stir in tomato paste (thoroughly incorporating it into the liquid), and bring to a gentle simmer. Cover and let it do its thing for about 30 to 40 minutes or so until the broth has reduced by about 1/4. If you choose to use your time wisely, you could be making your cheese-less pesto (we’re keeping this meal more or less kosher. And I do stress “more or less”.)

4. On a large cutting board, mince the hell out of one rather large clove of garlic. Add a pinch of salt to it and smash & smear it with the flat end of your knife. Next, roll your parsley and mint leaves into little, herby cigars and give them a right stiff chiffonading directly on top of the devastated garlic. Then add the toasted pine nuts and be merciless with them. When all of these ingredients have been savaged to your liking, scoop them into a bowl , drizzle with olive oil and stir. Taste and adjust salt for seasoning, if desired. You could, of course also shove all of these ingredients into a food processor and let that machine have a go at it, but you’d be missing out on a most excellent texture and you will be pitied the world over. Or at the very least by the entire Mediterranean region.

Cover and set aside.

5. Returning to the soup, add the ground cumin and cinnamon and give them a good stir into the liquid. Now add your tomato, zucchini, and meatballs. Let the whole thing continue to simmer for another 15 minutes, covered. You could be using this time either setting the dinner table yourself or convincing someone else to do it for you.

6. Taste the soup. What do you think it needs? More than likely, it will need a decent amount of salt and pepper. Would you like it more cinnamon-y? Cumin-laced? Now is the time to do this. Pull out a meatball. Cut it open and test for doneness. If it meets your satisfaction, it is time to eat.

7. To serve, ladle as many meatballs as your guest would like into the bowl first, then cover the balls with the soup. Doing it the other way around may lead to splashing, staining, and potential physical distress. Offer your guest the pesto-like condiment, which they will either welcome or refuse. If they refuse, gently remind them that you will have no choice but to refuse their welcome the next time they ask to come to dinner.

8. Enjoy this meal with a glass of wine drunk to the music of Miss Gorme. Namely with this song– Sabor A Mi:

I write about food and am very fond of Edward Gorey. And gin.
View all posts by Michael Procopio →
This entry was posted in Celebrities, Meatness, Rants and Stories and tagged Albondigas, Bad Theater, Eydie Gorme, Las Vegas, Sabor A Mi, Steve & Eydie. Bookmark the permalink.

14 Responses to The Amateur Gorme