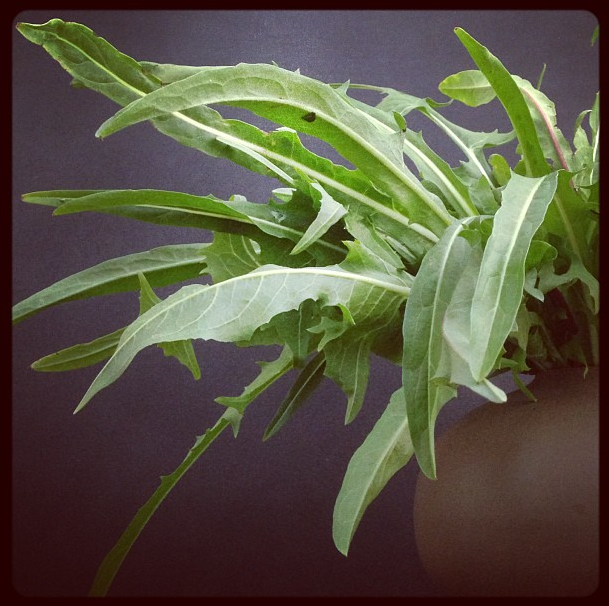 There’s an unassuming little dish we serve at our restaurant. It isn’t offered on our menu and yet everyone seems to know it’s there for them, should they need it.

The Greeks ask for it by its name: horta. Non-Greeks ask for “a side of braised greens” because they either don’t know the proper term for it or do know but are afraid to sound out the first, faintly phlegmy syllable in public.

Calling horta “braised greens” is an act of descriptive kindness and far more appetizing than calling them what they essentially are, which is boiled weeds. At our place of business, however, the dish is made from ingredients which are anything but weeds: the chard and mustard greens we use are deliberately cultivated and harvested by organic farmers. More esoteric greens like lamb’s ear and amaranth are added when the season allows, but they are grown from seed and carefully nurtured. There is nothing remotely wild about our bowls of horta, but there are people who are clearly wild about them.

Horta fleshes out the plates of rib eye steak and Greek potatoes we serve; it pillows the heads of whole grilled fish; it nests under lamb shanks ordered by the orzo-averse. It is piled into bowls, hot and limp, with a bit of its cooking liquid and a little olive oil, then brought out to guests with half of a lemon tied up in cheese cloth and green ribbon like a  church bonnet. It’s never the star of the meal, but it has a way of making its presence felt.

Non-Greeks often order it because it sounds like a healthy addition to their meal. Young and middle-aged Greeks might order it out of habit, because it’s more or less always been a part of their dinners or, in some cases as one friend confided, “because it reminds me of my parents, who always kept an empty bag in the trunk of the car in case they saw greens growing by the side of the road. They’d kick us kids out of the car and make us pick f***ing weeds until the bag was full because they could never pass up free food.”  I’d always thought his remark some sort of loving, familial joke about perceived Greek cheapness, which it was, but it was also a sort of testament to Greek resourcefulness.

Because there was a time when, if they did pass up a free meal, they might have died of starvation.

Whenever I bring a bowl of greens to older Greeks– the ones from the Old Country who survived the war– I always wonder if its presence at their table is practical or symbolic or both. Did they order horta because they simply need the roughage at their age, or are they paying homage to the very thing that may have helped them beat hunger– and the Nazis– and come out of World War II alive? I’ve never dared to ask.

In April of 1941, Greece fell to the Axis armies of Germany, Italy, and Bulgaria. What followed was three and a half years of harsh occupation, economic destruction, murder, and starvation. The occupying forces requisitioned most of the available food stuffs for their armies, leaving the Greeks with very little upon which to survive. Livestock was slaughtered, farms placed under guard, transport trucks commandeered. The cities and  islands like Mykonos and Chios, which depended upon shipments of food from the mainland in peaceful times, suffered the worst. During the winter of 1941-42, as many as 1,000 people a day were dying from hunger in Athens. It is estimated that more than 300,000 civilians died from malnutrition and starvation during the war. 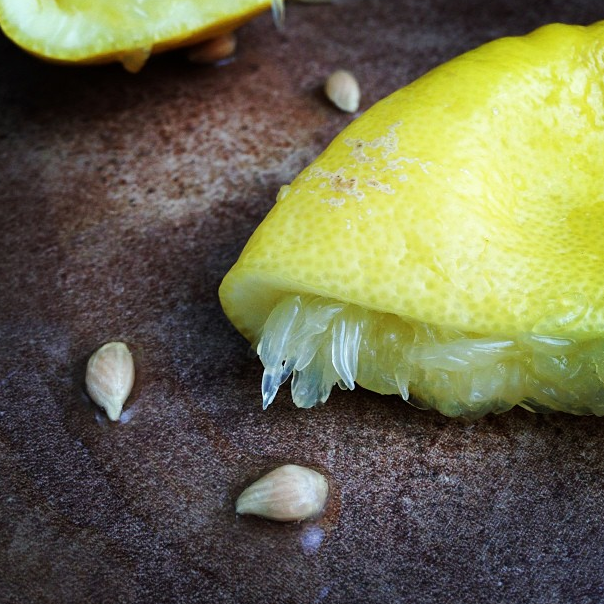 Those fortunate enough to live in the countryside foraged for survival. Wild greens such as dandelions, wild sorrel, mustard, fennel, sow-thistle, sea-beans– anything non-poisonous and edible– were gathered, boiled, and eaten. Olive oil was unavailable to many, and lemons were often difficult to come by. Another friend recently recounted the story of how his father would sometimes rummage through garbage cans for spent lemon halves to help make the weeds more palatable. Horta was often eaten alone, leaving nothing but the acrid taste of the greens on the tongue. Resistance fighters survived on little more than nettles and other wild herbs in the mountains of Northern Greece; their diet almost as bitter as the fight they waged against their occupiers– a fight they eventually won.

I sometimes wonder how many people survived the Occupation (and the ensuing civil war) thanks to piles of boiled weeds. I don’t think there’s any accurate way to measure. What I do know is that my respect for them has grown over time, thanks to a better understanding of their special Greek culture or, as I like to think of it, horta culture.

In 1943 Greece, a bowl of greens might have sat alone on the dinner table. In the 2013, it’s a struggle to find a spot for them on a table already crowded with more food than anyone could possibly consume, but they always make a place for it. With all the other, more lively dishes to compete with, no one may actually eat the horta, but it’s always comforting to know that it’s there, should anyone truly need it again. 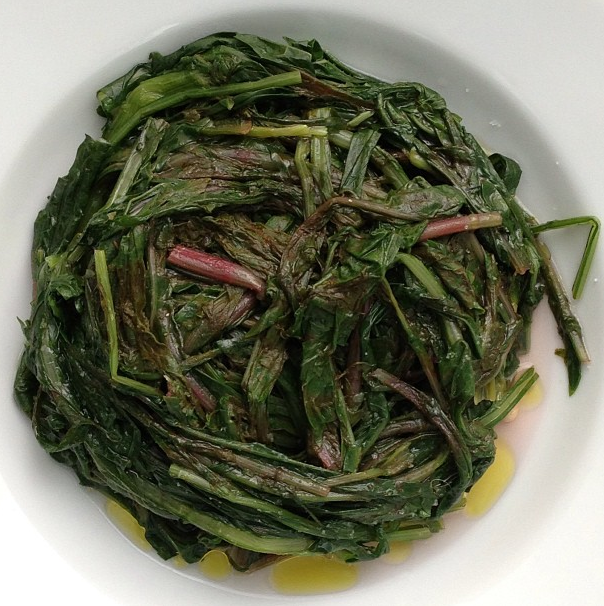 You can use any type of greens you like to make horta. Feel free to get creative, but don’t give it too much thought. Use what you have on hand. I prefer mine faintly bitter, which no one who knows me would find the least bit surprising.

The following recipe is just a guideline, since amounts are elastic and easily adjustable, just like the pants one should wear if one were having dinner at a Greek family’s house in non-famine times.

Serves two. Or one, if it is all one is eating.

1. Add water to a large, deep pot. Toss a scant handful of salt into the water and bring to a simmer.

2. Wash the greens until they are clean enough that you would wish to stick them in your mouth uncooked. Tear the leaf stalks in half, stalks and all (unless you’re using something with a particularly thick stem like kale) and drop them into the gently bubbling water. Stir the greens down until they are wilted and submerged. Cover and let simmer for about 10 minutes. Check for tenderness, paying attention to the doneness of the stalks. When they are properly supple, remove the greens from the water. Strain gently in a colander. Do not press excess moisture from them.

3. To serve, place the horta in a serving bowl, squeeze a lemon half over them, drizzle with olive oil and taste. If needed, sprinkle with a little more salt. Place the second half of lemon in the bowl, off to the side. Wrapping them in cheese cloth and ribbon is a lovely touch, but wholly unnecessary.

4. Eat and be grateful that you have more food available to you in your refrigerator, should you need it.

I write about food and am very fond of Edward Gorey. And gin.
View all posts by Michael Procopio →
This entry was posted in Savories and tagged braised greens, greek food, horta, starvation, World War II. Bookmark the permalink.