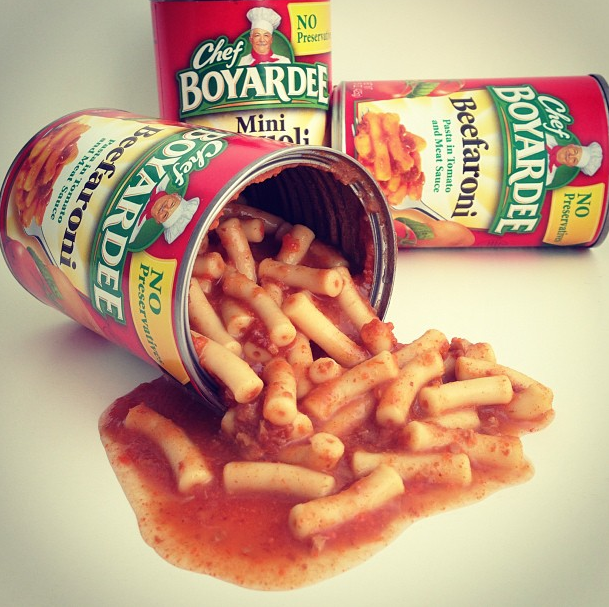 I had popped into my corner store around noon to pick up some hot sauce in order to add a little zing to my falafel wrap, but as I stood in the back aisle trying to decide between the Sriracha and Tabasco and Cholula, the desire for an altogether different kind of heat began to overtake me.

It would seem I was being cruised by an older gentleman. He was staring directly at my crotch. Granted, he had no choice in the matter because he was sitting on the middle shelf, plastered on the face of a can, directly beneath the spicy condiments.

He was a tiny, sturdy-looking mustachioed fellow with white hair that peeked out from under his toque. The stylish red kerchief he wore around his thick neck intensified the warm, pink flush of his cheeks. My own turned crimson at his gaze, which remained fixed upon my loins. I knelt down in front of him. His devilish smile told me he was looking for a bit of fun. The subtly stiff cock of his eyebrow said, “Well, how about it?” I like that in a man.

I found his offer strangely irresistible. He was offering me something I never before knew I wanted, but now did so more than anything. Even more than a falafel wrap.

I had a half hour to kill, I was game for a little lunchtime action, and I’ve always had a fetish for little Mediterranean men who know how to cook, so I took him up on his offer.  But I knew if wanted to taste his Big Beefaroni, I was going to have to pay for it. $1.79 was the price he quoted me off the top of his head. I felt a certain shame wondering what my Sicilian grandmother would think of the sin I was about to commit, and that made the prospect all the more titillating.

I loitered in the back of the store, quietly fondling the can until the coast was clear, then walked up to the checkout casually and put my money on counter.

“It’s for research,” I told the man behind the counter, though I don’t think he believed me. “You want me to put that in a plain brown bag for you?” he asked, unconvinced.

“Nope. I’m good,” I answered, trying to pretend away my embarrassment. I shoved the can deep into the right pocket of my cargo shorts and left the store. It rubbed hard against my thigh as I walked. And old Russian woman eyed the suspicious my bulge with a look that hovered somewhere between amazement and disapproval as I waited at the cross walk, but I didn’t care. I had only one thing on my mind and was nearly exploding with the desire to get home and whip it out.

Safely inside my apartment, I pulled the can out of my shorts and placed it on the kitchen counter. I poured myself a drink to relax myself. A finger of whiskey always helps with social lubrication.

“So…” I said, attempting a little flirty small talk,” Boyardee. That’s an Italian name, isn’t it?” But he didn’t answer. The man was all business, I thought– as cold and hard as the granite on which he was perched. I knew I needed to get him hot. And fast, or this nooner was going nowhere. I knocked back my drink and made my move.

I picked him up off the counter with a firm grasp in one hand as I seductively traced the outline of his head with the other “Got your nose!” I said to him, playfully. Gently, I pulled off his top. He barely resisted, making little wet-sounding noises as I peeled it away from his body. I stuck my index finger in his can. It felt cool and moist. Slowly, I pulled it out and placed the dripping digit to my lips. It was salty. It tasted of him. It also tasted of tomatoes and tin.

Once he was opened up, I poured him into a sauce pan and lowered him onto the stove. I ignited the flame under the pan, but it was he who had ignited the one in my nether regions.

“Are you hot yet? ‘Cause I am. Very, very hot,” I moaned with a long, breathy “h” as though I were un-fogging a mirror, but in a sexy way. And I was hot. I was standing too close to the stove. I pulled off my hoodie and threw it to the ground. I plunged three fingers into the pan to savor his warming essence and placed them under my nose. The scent of potassium chloride and enzyme-modified cheese product made me shudder with expectation. I placed those beef-flecked fingers in my mouth and sucked them dry. He was primed and ready.

“I could just eat you with a spoon,” I whispered to him. And then I made I growling noise, which emanated from deep inside of me. I was hungry. Hungry for him.

I tried to inhale him, but he was too much Beefaroni for me to handle. I stuffed as much of him as I could into my cheeks like a grey squirrel in heat. It was then that I caught a good look at myself in the reflection from the glass of the framed, vintage Coffee Arabica poster that hangs over my stove– all puffy faced with a chin covered in goo, like a drooling Brando in his later years. Suddenly, I felt like a whore, which was odd, since I was the one paying for this guy’s services. I discovered at that moment– standing there with a mouthful of limp noodle and hot, tomato-y effluence– that one can indeed put a price on shame. And my particular price was $1.79. I spit what I could into the sink.

I felt he’d somehow tricked me into taking him home. I was hungry and feeling lonely at lunchtime. He promised to fill my needs and my stomach. He also promised me 7 vitamins & minerals and 7 grams of protein per serving. But I was left holding the can, one very unsatisfied customer indeed.

“What are you looking at?” I asked him as I wiped my chin with a clean towel. His stare, which seemed so sexy to me not 15 minutes earlier, now appeared to have an air of mockery and smug self-satisfaction about it.

But he wouldn’t move an inch. He just kept on looking at me with those squinty eyes. He didn’t even have the decency to turn his back as I dried my tears. Or to leave.

So I threw him out– out the back door and down the garbage chute. As a San Franciscan, it was hard for me not to place him in the recycling bin, which is where he probably belonged, but I couldn’t bear the thought of him ever coming back. Even in another form.

I held my chin up and took a few deep breaths before I walked back into the kitchen. I knew I’d have to face the falafel wrap I’d left on the counter, which was forced to witness my afternoon of shame. I prayed it didn’t judge me too harshly for forgetting to buy the hot sauce.