The Corn Dogs of Easter 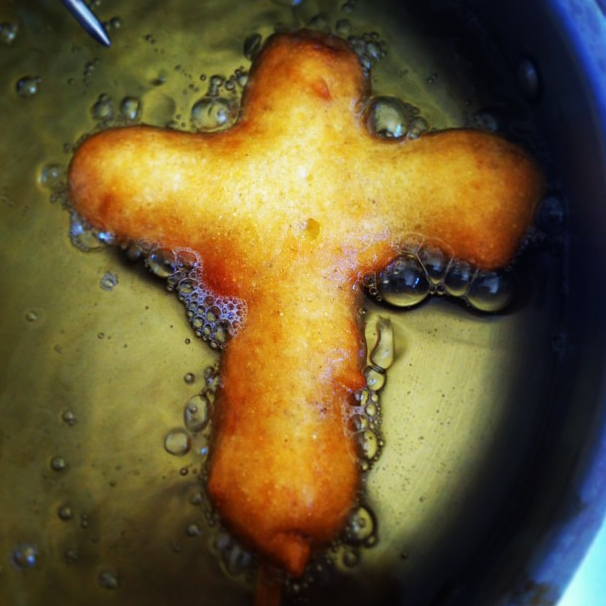 When I was a boy, I took everything the Catholic church told me literally.

After my first visit to the confessional, I was absolved of my transgressions by an old Irish priest who told me that, as soon as I said my ten Hail Marys, my soul would be light and unburdened by the weight of sin. When I had finished my last “Amen”, I ran outside to the church’s tetherball court and began jumping around the blacktop, convinced that with each leap, I rose higher in the air and therefore rose closer to God. It was a very good feeling.

When I took Holy Communion, I understood that, thanks to the miracle of Transubstantiation, I was accepting an actual piece of Christ’s body onto the tip of my tongue. But which piece? I never knew. I didn’t dare ask the priest who was doling out the goods, so I’d just return to my pew and sit next to my mother with the Eucharist softening on the tip of my tongue. I never dared to chew the wafer, thinking it might cause Jesus unnecessary pain, so I just let it rest there until it dissolved, wondering if I could tell from what part of His body it came. Was it from His thigh or His breast? Was it light meat or dark?  If I were to have judged based solely on flavor, I would have come to the conclusion that I was eating a part of His sandal every time.

And yet I always found myself wanting to go back for seconds. We never ate before morning Mass, so I was always extremely hungry. When everyone else was praying for the souls of the recently departed, I was praying for breakfast. Ingesting the communion wafer may have brought me closer to Christ, but it also whetted my appetite as it found its way into my stomach and got my gastric juices churning. It was a uniquely Catholic torture.

At Easter Mass, which felt like the longest of the year, I found this agony even more grueling, but entirely appropriate given the knowledge that Christ had suffered and died for my sins. I identified with Him because I maintained the deep, almost religious conviction that I was suffering and dying, too. Of hunger.

I never understood why there wasn’t more food available during church services. Christ may have been good at self-sacrifice, but His true calling was catering. The Wedding at Cana. The Feeding of The Five Thousand. And wasn’t the central theme of Catholic Mass a celebration of The Last Supper? I hated to think that a man as famous as Jesus would have had a last meal consisting solely of a diet biscuit and a sip of terrible wine. I would look at the altar and think the priests could have done a much better job at feeding their congregation if they had set it up as a buffet. It was already set with silver and a nice cloth, so they didn’t have far to go.

I never considered at the time what they might serve at such a buffet, but I was confident that whatever it was, they’d never run out of anything because Jesus would never let that kind of thing happen. Especially at one of his own parties.

For the bible told me so. And quite literally, for that matter. 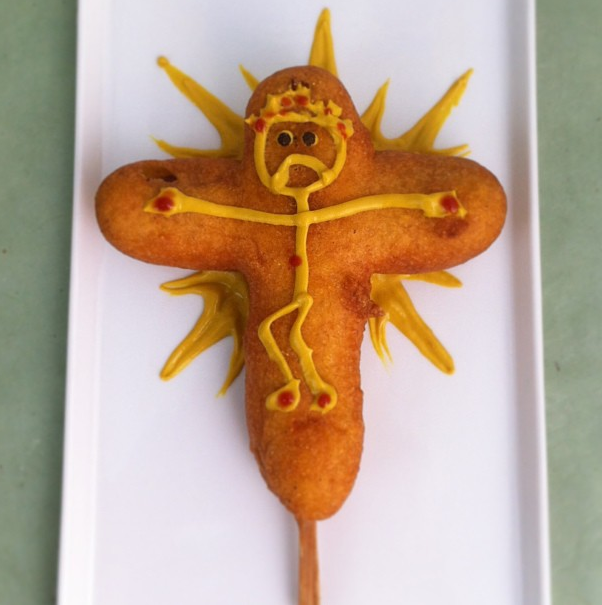 If I were a church-going child today, I know what I’d like to see served at an Easter Service buffet. Everything would conform to a Jesus/Easter theme: Hot cross buns, chocolate bunnies, and cereal in the shape of crosses and halos; a knife-wielding deacon carving up the Lamb of God on one side, a seminarian offering up a ham of God on the other for those worshipers among us who don’t like lamb.

And in the middle of everything would be a treat that would really bring home the drama of Christ’s Passion in edible form. Something delicious and filling, but would still remind us of Christ’s suffering with each and every mouthful: corn dogs in the shape of a crucifix.

They’re more substantial than a communion wafer, and more delicious, too. And, given the nature of hot dogs, you still won’t be certain from which part of the body they came. All that’s needed is the blessing of a priest to become a sacred part of a balanced church breakfast.

With the Catholic church suffering a loss in attendance, even at Easter time, drastic measures should be taken to reverse the decline. Ordaining women, getting rid of the celibacy rule, and welcoming gay, lesbian, and transgendered would be nice, but I don’t see these things happening any time soon, so they might as well throw a nice, big buffet and see what happens. Or they might come up with some other novel approaches. All they have to do is ask the seven year-olds of their diocese because, as we all know,  Jesus loves the little children.

This recipe is adapted from Saveur magazine’s State Fair recipe, which was, of course, gotten from poor people who work state fairs, who got it from some other people, who most likely got it from wheat and corn crops. And cows. And mustard companies. The using-a-chopstick-as-a-handle trick I learned from Ree Drummond’s website. She most likely learned this trick from Beatrice Lillie’s character Mrs. Meers in Thoroughly Modern Millie. And Matt Armendariz will very likely be including this recipe in his upcoming Holidays On A Stick! cookbook (publishing date undetermined).

Serves 8. To serve multitudes, pray over this recipe’s ingredients for as long as needed if you are perfect and without sin. For everyone else, multiply the recipe by hand.

1. In a large mixing bowl, whisk together flour, cornmeal, sugar, baking powder, baking soda, dry mustard, white pepper, and salt. In a separate bowl, combine milk, buttermilk, and egg until the trinity becomes a confusing, inseparable muddle. Add the liquid to the dry ingredients until all becomes binding and Universal.

2. In a wide, deep pan or Dutch oven (this requires more elbow room than an ordinary, non-Catholic corn dog recipe), pour oil to a depth of 2″ and warm over medium-high heat until the oil reaches 350°F. 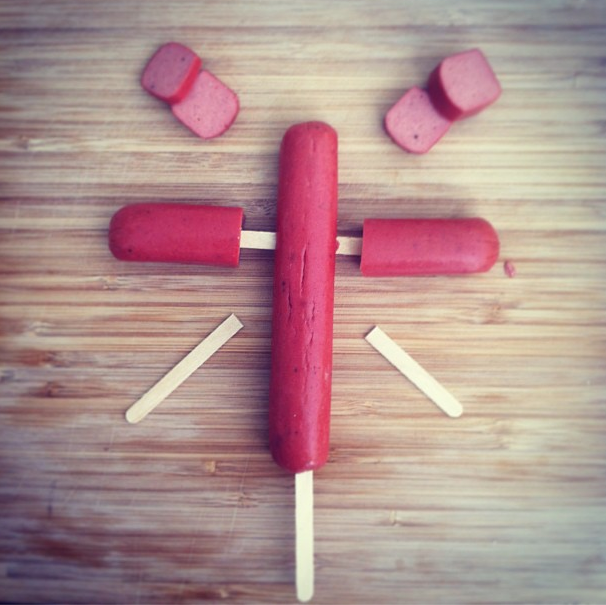 3. As the oil is heating, make the hot dog crucifixes. To assemble, cut about 2″ off the narrow part of each chop stick which, under ordinary circumstances, be the end one would place in one’s mouth. Discard the circumcised tips. Gently insert the chopstick into  one end of a hot dog, until all that is left visible is a 2″ handle. Cut a second hot dog in thirds, discarding/sacrificing the center piece. These will be the arms of the cross. To attach, cut a coffee stirrer to the appropriate length and slide through the center of the top half of the  whole wiener, then slide on the remaining 2/3 of cut wiener. (See photo*).

4. Dip one hot dog cross into the batter, coating well. The batter should be firm and giving, but not runny. If it is too dry, add a little milk. Too runny, add a little more flour. The batter is as forgiving as He is. Gently shake off any excess and lay directly into the pot of hot oil. Fry on one side for about 1 1/2 minutes. Using tongs, gently turn its other cheek and fry for the same amount of time. On the third minute, let it rise from the oil and rest on a shroud of paper towels to cool. Repeat until all crosses are battered and fried.

5. To serve, decorate with mustard. You do not have to put the image of Christ on every  corn dog. If you have any martyrs in your family, feel free to squirt on their likeness and share it with them to show that you know how much they themselves have suffered, which will give them great comfort. Just please remind them not to bite into the coffee stirrer crossbeam, which most decidedly will not.

* Note: This is a photo of a practice-run crucifixion dog in which I discovered that coffee stirrers are excellent for side beam support, but terrible for use as handles, which is why one should use chopsticks.

I write about food and am very fond of Edward Gorey. And gin.
View all posts by Michael Procopio →
This entry was posted in Holidays, Rants and Stories and tagged Catholics, corn dog recipe, Easter, jesus. Bookmark the permalink.

48 Responses to The Corn Dogs of Easter