I Got It from Tom: Absinthe Jellies

Posted on December 20, 2012 by Michael Procopio 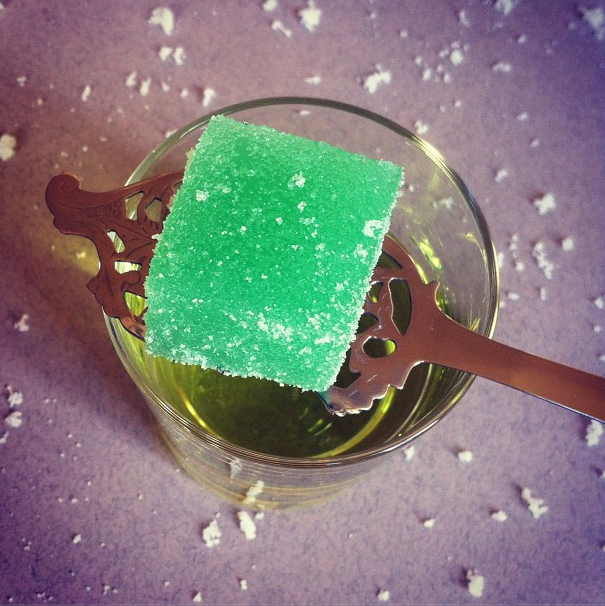 I entered this joyous season with a couple of heart-chilling stories I wanted to share with the world and some fun recipes to match. Unfortunately, the point  driven home to me for the Holidays was that my capacity for coming up with interesting ideas is not always paired with the culinary talent for bringing them to fruition: the pot pie recipe I threw myself into wound up being thrown in the garbage, the Salted Carmelite nun candies I wanted to give out for Christmas looked warped and depressed in their nasty looking habits. I dare not go on. I will say that even my ability to fix myself a bowl of cereal with confidence was suspect.

It was enough to drive a person to drink.

Fortunately, I recalled the eternal wisdom of the great Maria von Trapp who once said to her flock, “Wenn der Herr eine Tür schließt, irgendwo Er öffnet ein Fenster,” which roughly translates (and I do mean roughly) to “When the Lord closes the door on your edible nun idea, somewhere he opens a window.”

As luck would have it, that window happened to shine a divine light upon my liquor shelf. Even more fortunate was the fact that I happened to be browsing the internet reading up on Tom Lehrer, the great mid-20th Century composer of such songs as “Poisoning Pigeons in The Park” and “The Masochism Tango.” It was if by some unseen force that I was willed to read the Wikipedia passage that mentioned Professor Lehrer’s (spurious) claim to have invented the Jell-O shot as a way to circumvent alcohol restrictions while working at Los Alamos Labs in New Mexico.

And, just like that, faith in my cooking abilities was restored like a Christmas miracle. Or maybe it was just the booze talking.

Whatever the case, it is thanks to Maria von Trapp, God, Tom Lehrer, and that bottle of absinthe collecting dust on my liquor shelf that I am able to bring you a recipe that is sure to please (and thoroughly sozzle) your loved ones, just in time for the Holidays. However, if anyone asks me where I got the idea, I’ll just say, “I got it from Tom, who got it from Agnes.” And then I will direct them to this video:

These jellies are not for children, which is a good thing because in all likelihood, they would not like them. They are what they are, which is incredibly alcoholic. 11o proof.  Please serve, suck, and chew them responsibly.

Makes enough to summon a legion of green fairies for you and all of your adult loved ones.

• 3 cups of water
• 8 (1/4 ounce) packets of unflavored gelatin
• 1 cup of granulated sugar
• 2 1/2 cups of absinthe
• 2 drops of green food coloring (this is not entirely necessary, but it does make them more appealing)
• Plenty more granulated sugar for coating.

1. Pour the water into a medium saucepan and sprinkle the gelatin evenly over the surface. Leave unmolested for about five minutes, until the gelatin softens. Add one cup of sugar and whisk to combine.

2. Over low heat, stir the mixture with a rubber spatula, scraping down the sides of the pan as necessary until the sugar and gelatin are fully dissolved. It will take about 8 minutes to attain this state. Whatever you do, DO NOT BOIL. DO NOT EVEN SIMMER or the gelatin will not set properly and you will have wasted a lot of very expensive liquor, which is a crime in every state except Nevada.

3. Remove your pan of gelatin from the heat, add the absinthe and food coloring, then stir until all is well combined. If there is extra absinthe left in your absinthe bottle, wait until you have finished preparing this recipe until you drink it. Otherwise, I cannot claim responsibility for what happens.

4. Place an 8×8″ Pyrex baking dish onto a small baking sheet or tray that will fit such a thing, then pour your gelatin into the Pyrex dish. Place in your refrigerator to allow the near-liquid goo to cool and firm– at least 2 hours or, better yet, over night. There is no need to cover your gelatin unless you also have left items such as creamed herring or durian fruit uncovered in the same refrigerator.

5. To release your gelatin from its Pyrex confines, dip the container into hot water and (starting from the number one) count to the number seven. After you have wiped the bottom and sides of the Pyrex, place a small cutting board over the top of the container and quickly flip it upside down. The gelatin should now be released on its own recognizance. If it does not, repeat the the water trick and try again. Return the now-freed gelatin (still on the cutting board) to the refrigerator for a few minutes to the top and sides to re-firm themselves if necessary. Remove them only when you are ready to cut and serve. 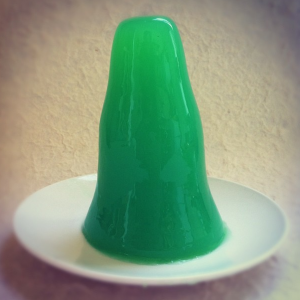 6. Slice the gelatin into any size you wish. If you have made the error of pouring some of the gelatin into an ice cream soda glass, thinking that it might make for an amusing Christmas Tree-like shape, think again. You will end up with something that looks like an advanced-level sex toy (see: photo on right). Small one-to-two bite squares are ideal and much less disturbing to friends and family.

7. When you have sliced the gelatin into cubes, roll them in sugar, shaking off the excess. Serve immediately* to people you would like to see very drunk. If you decide against rolling them in sugar, they will not weep, but remain miraculously stable. However, they won’t be as sweet. Do with them what you will.

*When I say “immediately”, I mean “immediately”. These jellies are so laden with alcohol that the will begin to weep if left unattended without refrigeration which, coincidentally, is what the angels will do on your behalf if you eat too many of them. Should this occur (the weeping of the jellies, not the angels), re-roll them again in sugar before serving seconds.

I write about food and am very fond of Edward Gorey. And gin.
View all posts by Michael Procopio →
This entry was posted in Holidays, Liquids, Sweets and the Like and tagged absinthe, Absinthe Jellies, alcohol, gelatin, holidays, Maria von Trapp, Tom Lehrer. Bookmark the permalink.

21 Responses to I Got It from Tom: Absinthe Jellies