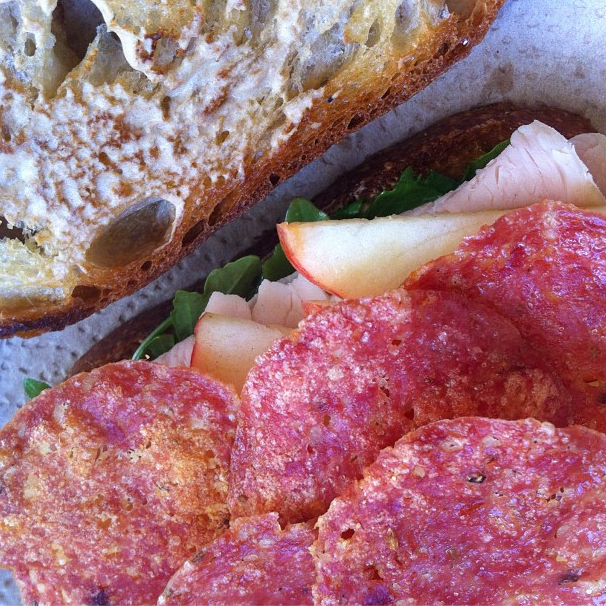 One of the most important lessons I learned this week was this:

Never accept an invitation unless you’ve actually read it.

My friend Sean Timberlake of PunkDomestics.com was hosting an event for Columbus Salame and sent me an email asking if I would like to attend. “Why not?” I thought. I had the afternoon free, it would be nice to see Sean, and I am rather fond of cured meats. It seemed like a win-win-win to me.

When I received the official email invitation, attached to it was a lovely note from the co-ordinator of the event stating that I could bring up to three guests “to cheer me on.”

“Cheer me on?” I wrote back. It seems I had missed the part where, by accepting, I had agreed to participate in a Top Chef-style sandwich making throw down with two other bloggers, Chef John of FoodWishes and Lynda Balslev of TasteFood in front of a panel of judges.

3 bloggers, 3 sandwiches, 20 minutes. With only one winner, the only likely outcome seemed more win-lose-lose than win-win-win.

But, what the hell. I’d never entered a 20-minute sandwich competition before. I knew and liked my competitors personally, there would be food involved, and it would get me out of the house. Win, win, and win again.

Before the competition began, the three of us were conveyed from the Hotel Vitale by pedicab to the San Francisco Ferry Building located directly across the street, which saved us precious time and energy and helped to ensure that none of the competition would meet a distracted, jay-walking traffic death (Thank you, Columbus). We were then each handed $10 (US) and given 10 minutes to explore the markets in search of a “secret ingredient”. John returned with a pluot and a handful of pine nuts, Lynda traded her money in for pinch of fennel pollen, and I wound up a fuji apple and bone marrow butter, which were the firs two things I came across with the correct price tag.

Safely returned to the Hotel, John managed to tell our chauffeur that he and I were on our honeymoon in order to throw me off my game. I was about to admit to our driver that it was our second honeymoon, but I was too busy wondering what the hell I was going to do with four dollars worth of bone marrow butter to embellish his story. The three of us then placed ourselves at our designated work stations in front of the judges and got to work when the countdown had begun.

My sandwich was intended to be a simple one: smoked turkey, sopressata, apples, and arugula. My method of preparing the sandwich, however, was not so simple: fry the sopressata like bacon, smear the bread with an esoteric ingredient (bone marrow butter),     build the sandwich, and toast the whole thing to a beautiful, toasty, crispy, golden hue.

In 20 minutes. Of course, this did not happen.

Frankly, I am surprised that I was able to finish the sandwich at all. But it doesn’t matter, because I had a good deal of fun and there were a few things I was able to take away from the experience (besides a generous assortment of meat):

1. If you are pressed for time, attempting to utilize an apparatus with which you are totally unfamiliar, like a panini press, is ill-advised.
2. Obsessing over one element of a dish when there are others which need equal attention is not helpful.
3. Twenty minutes is not a very long time when it comes to creating an original sandwich off-the-cuff.
4. The fact that one can accomplish something in such a short span of time is extremely satisfying.
5. I actually don’t mind coming in second place. Especially when the winner donates his winnings to charity. (Chef John is a very good egg indeed.) 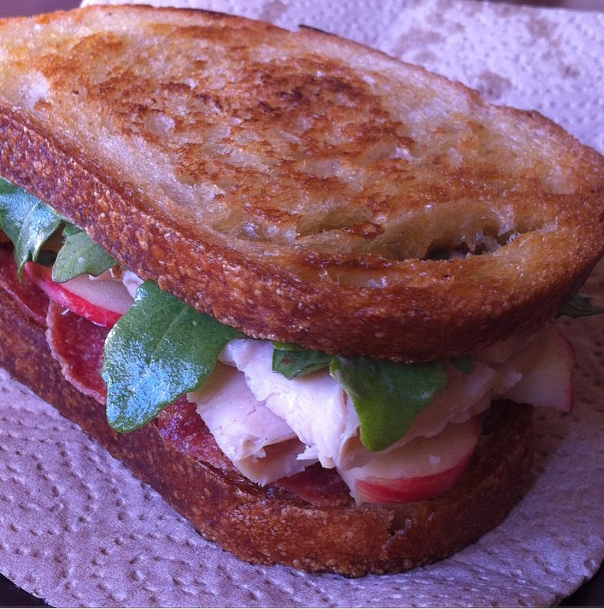 In my kitchen, this sandwich didn’t take 20 minutes. In fact, it only took 10. The beauty of it is the soppresata, crisped up like spicy discs of bacon. If you can get your hands on bone marrow butter*, get it. Stock up. It adds an incredible depth to anything it touches. So much so, in fact, that I am next considering applying it to my morning bowl of Malt-O-Meal. If you can’t find it, it doesn’t matter– the following recipe below doesn’t use it. Nor does it use a panini press, because said appliance and I are still not on speaking terms.

• Two slices of bread (white sandwich loaf or sweet batard work best. Avoid sour, ultra crusty varieties.)
• 8 slices (about 25g) of sopressata (or any salami you prefer)
• 2 slices (about 100g) of smoked turkey breast
• 6 or 7 thin slices of sweet tart apple (Fuji is lovely)
• A small fistful of arugula, washed and dried
• As much Dijon mustard as you like
• 1 tablespoon of unsalted butter (if you do manage to get your hands on bone marrow butter, use it)

1. In a cast iron skillet, fry up your sopressata, flipping the pieces over from time to time until crispy. About 3 minutes. Shake off excess drippings into the pan and set the meat aside to drain and cool on a paper towel. 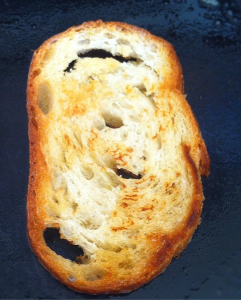 2. Add the butter to the pan. Put both slices of bread into the butter/sopressata fat, coating each side. Fry until both sides of the bread are crispy, golden brown, and sodden with delicious animal fat. Remove and place on the same paper towel your fried sopressata is resting.

3. Toss the arugula into what’s left of the fat in your skillet to coat, then remove. Briefly. The idea is not to fry the greens, but to gently wilt and flavor.

4. To assemble your sandwich, coat one side of each slice of bread with another thin layer of butter and a little mustard. Layer the sliced turkey, apples, arugula, and crispy sopressata (this is the order I prefer, but you do it however you like) onto one slice of toast, then seal the deal with the final slice of toast on top.

5. Serve to a panel of judges, be they friends, lovers, colleagues, or parents. Or actual judges. They need to eat, too.

* For SF readers, bone marrow butter (as well as marrow bones) can be purchased from the Prather Ranch store located in The Ferry Building.

I write about food and am very fond of Edward Gorey. And gin.
View all posts by Michael Procopio →
This entry was posted in Meatness, Sandwiches and tagged Columbus Salame, competition, reading comprehension, sandwich, soppresata. Bookmark the permalink.