Posted on September 19, 2012 by Michael Procopio 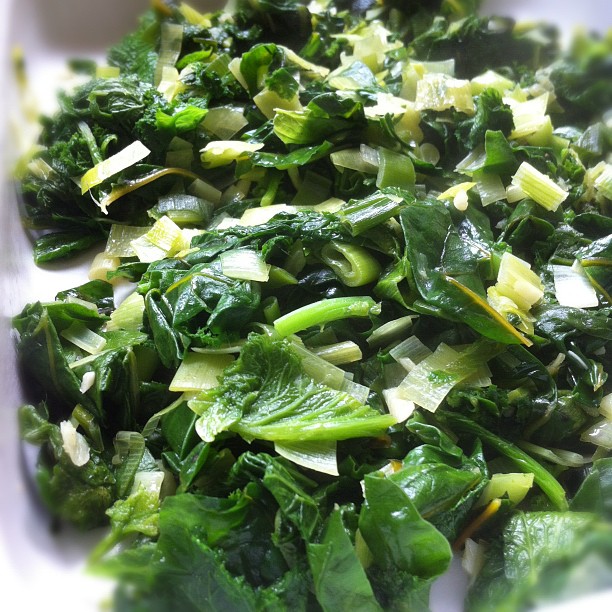 Sometimes, there are things a person takes for granted, thanks to their close proximity or easy availability: a spouse, a friend, a favorite market, a booty call.

When one of them packs up and leaves town, he or she realizes the great thing that was always at hand is now out of reach, only to be replaced by an un-healable abscess of sorrow. Or a substitute, which will be constantly compared to the original, for better or for worse.

Now you can understand my state of mind when, earlier this year, I suffered my own, devastating loss– the spanakotiropita, served at my restaurant since the day it first opened, vanished into phyllo-thin air.

Spanakotiropita (Greek spinach and cheese pies) aren’t especially glamorous by nature. They weren’t exactly the show-stopping feature on our menu, but it was comforting to know they were always there like a fresh box of Kleenex or a shut-in roommate who knows the Heimlich maneuver. They were homey, a little homely, and entirely delicious, no matter what Olympia Dukakis says about them.

I was horrified by their disappearance and mortified by the all-cheese tiropitakia which replaced them.

“But why did the spanakotiropita have to go?” I asked our chef, as if I were a bewildered child asking his mommy why daddy left with that big suitcase or why on earth she was burying a favorite pet hamster behind the rose garden.

Just trying something new. I wondered to myself if this was the culinary version of  a midlife crisis, like getting rid of a dependable car with great gas mileage and the always-there-for-you wife who put you through grad school and replacing them with a 2-seater sports car and a blond with big tits to put out inside of it.

There was nothing I could do but accept this answer from an otherwise reasonable man. But it would be a cold day in restaurant hell before I would ever accept this wholesale abandonment of an old favorite for a new item, no matter how big its tits were.

I found myself flying through Kübler and Ross’s Five Stages of Grief:

1.) Denial: I refuse to believe that anything of this horrible magnitude could ever befall my beloved restaurant.
2.) Anger: I want to stab these new pies with a steak knife.
3.) Bargaining: Perhaps if I get enough restaurant guests to sign a petition, the old pies will come back. Or, just maybe, if I prayed hard enough, they would return.*
4.) Depression: I cannot will these new pies to taste anything like the old ones and therefore am considering suicide.
5.) I never made it that far.

I was grateful that I was able to process all of this terrible grief within the span of a few days. And when I recovered, I came to a few important realizations:

1.) I am a big boy. I can handle this sort of trauma like a champ.
2.) I am an able cook and recipe developer. I should make my own damned spanakotiropita if I can’t handle the fact that they aren’t going to be made available to me by my restaurant and the small army of prep cooks therein.
3.) If I make my own, I can put what ever I like into them and make them whatever shape I want them to be. I can be the master of my own Greek pie destiny.

And with that realization came a great relief. And, I think, a great recipe.

Hortotiropita or, in American English, Greens and Cheese Phyllo Pies

The great thing about phyllo pies is that you can fill them with anything the voices in your own head tell you to. Go ahead and be inspired: lamb, greens, lemon curd, cement, whatever.  Listen to your voices.

You can also shape them however you like. In this case I have abandoned the folded flag look of traditional pies and replaced it with the shape of my favorite Greek dessert, galaktoboureko, or, in Chinese terms, an egg roll.

This recipe, which is suited to my particular tastes and needs, is merely a guideline. All that matters is that you love the taste of your own filling. Interpret that last sentence however you wish.

Makes about a dozen pastries.

For Garnish (which is purely optional, as is pretty much everything else)
• 3 teaspoons of sesame seeds
• 1 teaspoon fennel seed

1. Clean your greens, remove their stocks and stems, and roughly chop. Set aside.

2. Toss 3 tablespoons of butter into the bottom of a large stockpot or a very large sauté pan and melt over medium heat. Add the leeks and scallions, moving them about the bottom of the cooking vessel until they are soft and vaguely translucent. The idea is not to brown them, but rather to weaken their resolve. Add the chopped greens a handful or two at a time, stirring them about with tongs or a large wooden spoon to wilt them/coat them with the butter and warm the leeks and scallions. Repeat this action until all the greens have found their way in. Cover and cook on a medium-low flame, stirring and tossing occasionally until all the leaves are wilted. The contents of the pot will have reduced by about 2/3 their original volume (about 7 to 8 minutes). I hope you do not find this at all alarming.

Do not overcook. Nothing horrifying will happen if they do, it’s just that I want you to be mindful of the fact that the greens will be cooked further when eventually wrapped in phyllo and shoved into a hot oven.

Empty the hot, flabby greens into a colander which, if you are wise, will be strategically placed into your sink. Drain well, squeeze as much liquid out of them as possible without straining yourself or traumatizing the steaming vegetation. If you are the type of person who enjoys such things, reserve the greens sweat/liquid/unwanted moisture, let cool, and drink.

Spread the strangled greens into a large casserole dish and let cool to room temperature. You may also transfer the greens to a large bowl, but they will take much longer to cool if you choose to do so.

At this point, I prefer to transfer the mixture to a smaller vessel, cover it tightly, and refrigerate it until I am ready to use it. Making this a day in advance of baking the pastries is a very good thing. The flavors are more prone to mingle that way.

4. About an hour before you wish to assemble your hortotiropita heat your oven to 450°F and place a rack to the upper third of the oven. Remove both the phyllo and the filling mixture from the refrigerator and let them warm up to the idea of their impending intimacy (room temperature). During this time, you may also wish to melt the butter. (Some people insist upon using only clarified butter for brushing onto their phyllo. I say “bravo” to them, but I find it an unnecessary waste of time. I can think of so many other ways of squandering whatever time I have left on this planet. Very few of them have anything to do with melting butter). 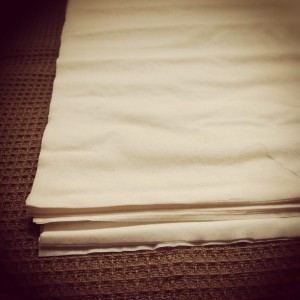 5. Make certain you have a large enough work surface to accommodate a) your unfolded phyllo, b) a cutting board or prep space wide and long enough to give the phyllo you are working with enough room to manuever, c) a half-sheet pan lined with foil or parchment (which will comfortably hold twelve pastries), and d) a place for your bowl of filling and melted butter, respectively.

6. Place a clean kitchen towel over the surface of the space where you would like your phyllo unfurled. Carefully un-package said Greek pastry sheets and lay them flat over the towel with a combination of care and confidence. Lay a second clean towel over the phyllo sheets to prevent them from drying out. Which happens much sooner than one might think it would. I find that giving the top towel a very light mist of water from a spray bottle helps. However, I do not recommend over-moistening, because that would be extremely unfortunate for both the phyllo and the person attempting to manipulate the phyllo. Rather, pretend you are about to iron out a subtle wrinkle from this top towel. A few, short mists. If you are unfamiliar with the subtleties of ironing, you may wish to skip this step and just work as quickly as possible. 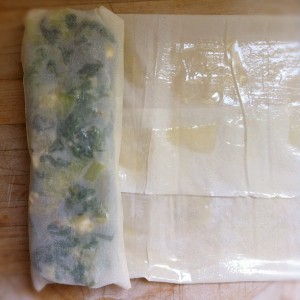 6. To assemble the pies, place one sheet of phyllo onto your work space and brush with butter from the center and work your brushstrokes to the outside edges. Place 85 grams of filling (Yours do not have to be 85 grams, but I do recommend weighing out your filling to whatever amount pleases you to get uniform results) in the left-hand center of the pastry sheet, about 2 inches away from the edge.

Fold the bottom of the sheet up to the center, fold the top down to the center until the length of your pastry is the one you desire. Mine happens to be the approximate length of my iPhone, give a light brushing of butter to the newly exposed surface. Roll the pastry over unto you have reached the end. Place flap-side down onto the awaiting sheet pan. Repeat until you have used up all of your filling. 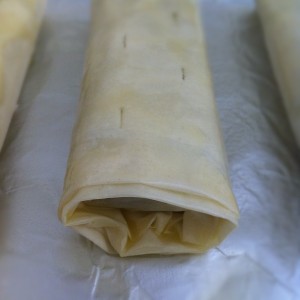 7. Take the tip of a small knife and pierce each pie to its foundation five times. I cannot stress how important having stream vents is. I took a batch of these to a party this summer, became distracted by cocktail-wielding friends, and forgot all about piercing. Most of them exploded. However, they were still delicious.

8. Brush the tops of your pies with more butter and then pop into the oven to bake for 8 minutes. After 8 minutes have elapsed, rotate the sheet pan, sprinkle the pies with the sesame and fennel seeds, then return to the oven for about 5 more minutes or until the pastry is golden brown. Remove from the oven and let cool for a few minutes because burning-hot cheese is an unpleasant sensation to one’s mouth. Unless, of course, one is mentally prepared for it, as in the case of saganaki.

Serve warm with a beer, some friends, a little ouzo. Whatever you wish to serve them with, just be certain one of those things is a napkin– these are flaky little bastards.

* The spanakotiropita did, in fact, return to our restaurant menu as I hoped and prayed they would. It’s almost enough to make one believe in the power of prayer.

I write about food and am very fond of Edward Gorey. And gin.
View all posts by Michael Procopio →
This entry was posted in Rants and Stories, Savories and tagged denial, greek food, greens, grief, hortotiropita, Kübler-Ross, spanakopita, spanakotiropita. Bookmark the permalink.

19 Responses to Hortotiropita & The Five Stages of Restaurant Grief.