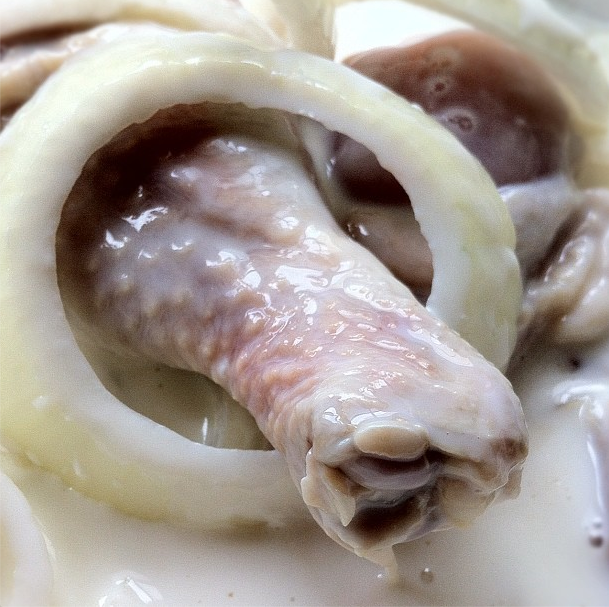 There is nothing else to call it except “Mrs. Webb’s Fried Chicken.” It’s her recipe and I want to spread the news of it like a televangelist spreads the Gospel.*

Except I won’t be asking you for any money. Nor will I condemn you for not believing it is the One True Fried Chicken Recipe.

But it may very well be.

Every summer, I fry a batch or two of this poultrified miracle and enjoy the false memories it conjures.

I think of the beautiful childhood picnics I never went on. Laying out my hand-stitched quilt on a grassy patch of park free of dog feces, the well-timed automatic sprinklers offering me a refreshing spritz of mist at 15 minute intervals, drinking freshly squeezed lemonade and eating my Grammy’s homemade fried chicken.

How I miss Anaheim.

If a summertime picnic was to be had, it was generally done in my backyard on an old, frayed electric blanket (unplugged). Just myself and my dogs, Cindy and Penny, who were not, as one might think, named for Cindy Williams and Penny Marshall. The coincidence of my childhood with Laverne and Shirley is simply bad timing.

No sunscreen– we didn’t feel the need for such things in those days. All I needed for a (temporary) deep, golden tan was the mayonnaise dripping from my bologna sandwich. I know what you’re thinking… and you’re right. My neighbor Kim and I once slathered Best Foods all over our bodies and then baked ourselves in the sun. We thought nothing of it until we began to smell. That was about the time Kim’s mother found us and screamed something about us being walking salmonella and wasting her good mayonnaise. She then sprayed me down with a hose and sent me home. But I digress.

Perhaps it was the trappings that went with its eating: red checkered picnic cloths, watermelon, happy families, a sack race. That seemed like a great summertime sort of lifestyle. 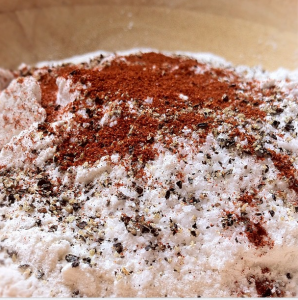 My fried chicken education didn’t happen until well into adulthood. I had invited my cooking school partner Todd over for dinner one summer evening and thought fried chicken sounded like a good idea. As I took the chicken legs out of their plastic seal and began to place them directly into the flour mixture I’d made, Todd cocked is head like a confused dog and asked, “What are you doing?”

I thought it was fairly obvious what I was doing and said as much.

“That’s not how my Mama makes fried chicken and my Mama knows fried chicken.” His voice had suddenly developed the long, rounded vowels and deep base of an imaginary Kentucky Colonel– decidedly un-New Jersey-like– the state in which Todd learned to speak. He then explained that his mother was from West Virginia. We went to the market to purchase what he needed to make proper fried chicken, then I stood back and watched him work. Since the chicken needed to soak overnight, we went out for burritos that evening instead.

He came back the next day to fry it all up. I was floored by the results. Now I realize that everyone thinks they know what the perfect fried chicken should taste like. Well, you’re wrong, plain and simple. Thank you Todd, wherever you are. And thank you, Mama Webb, for showing me into the light. 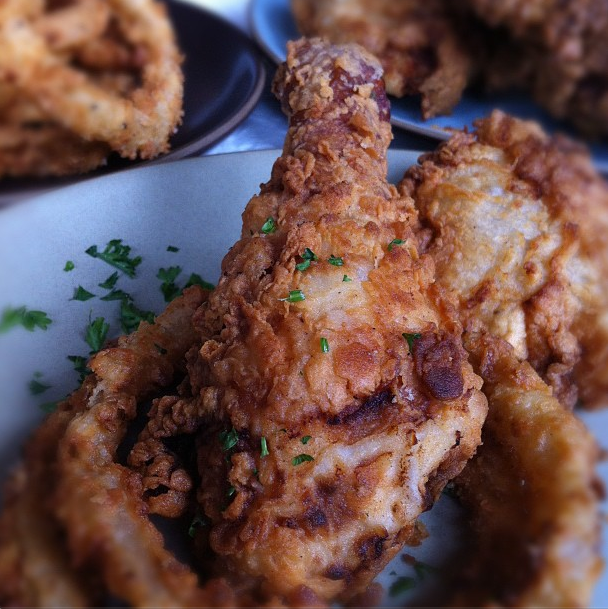 The added bonus of the particular recipe is the stack of onion rings it produces. Where as the onions infuse the chicken, so does the chicken infuse the onions. That’s how the system works. The system called reciprocity.

That last bit is from a Broadway musical and it is sung by a prison matron. I will stop there.

• 12 pieces of chicken (I like thighs and drumsticks. Breasts just seem like a waste for frying)
• 1 quart of buttermilk (low fat will do just fine)
• A generous amount of salt
• 1 onion, sliced into rings or Lyonnaise style, if you like– you’re the one eating them
• 3 cups of all purpose flour (at the very least)
• Lots cracked black pepper
• As much cayenne pepper as you dare
• 1 1/2 quarts vegetable oil** for frying (corn, safflower or whatever. Don’t get fancy with the oil or people will laugh at you). Or, if you prefer, vegetable shortening. Or, as my friend Carrie just informed me, beef lard. That would probably be too much happiness to bear.

1. In a large bowl, coat the chicken pieces liberally with salt. This not only salts the chicken, it draws out impurities, preventing unsightly blood spotting as you fry. Let the chicken sit in the salt for one hour.

3. Return chicken to the bowl and add the sliced onion. Toss together and cover with buttermilk. Cover and set in refrigerator overnight or for one full day. Or two. 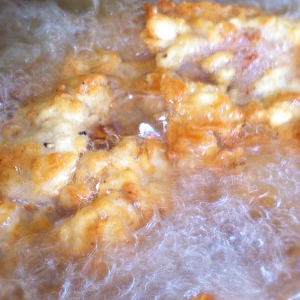 4. In a large skillet, pour one inch of oil and heat to 325 degrees. Try not to let the oil get hotter or the chicken will burn. I use a thermometer to gauge the temperature. I suggest you do, too, since the oil temperature drops significantly when the cold chicken is added.

5. In another large bowl, combine flour and brave amounts of salt, pepper, and cayenne. I’ve never bothered to measure the amount of this I use and neither should you. Just go for it.

6. Remove all the chicken from the buttermilk-tainted bowl. I don’t care where you put it as long as you put it somewhere clean. Shake excess buttermilk from a piece of chicken and roll it in the flour mixture. Dip the chicken back into the buttermilk and once more into the flour. If you’re not into double-crusting, fine. Add the chicken to your pan as you go, skin side down. I find that adding the chicken gradually to the pan helps to maintain a more constant oil temperature. Just make sure you have some sort of system for knowing which pieces have been in the longest. I work clockwise. You do what you want.

7. Wash your hands between chicken-dipping or you will no longer be able to find your fingertips. Skim the pan for floating bits of crust with a fine mesh strainer between batches.

8. Fry the chicken until golden brown, about 10 to 12 minutes per side. Make sure you’ve got some music appropriate for frying playing. This is going to take a little while.

9. As each piece finishes frying, place on a rack to drain. Why waste paper towels?

10. Now you have these wonderful onions to fry up. Proceed as with the chicken, battering and double dipping.*** How nice to have a side dish built right into the recipe. Serve hot or cold. Not the onion rings, of course. I like the chicken cold. For picnics, you know.

* This is a post updated from four and a half years ago. It was originally titled “Fried Gallus Gallus.” However, I love this recipe so much that I needed to rename it after the woman who (indirectly) taught me how to make it.

** The amount of cooking oil used for this recipe is enough to fill an 11″ frying pan to the depth of 1″. If you use a smaller pan, you will need less oil. Of course, in fried chicken preparation, the wider the pan, the better.

*** If you find you don’t have enough flour/spice mixture left over, just make more. You already know how easy that is.