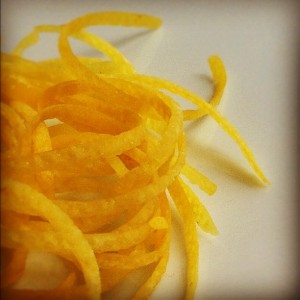 I don’t understand Arnold Palmers. I know what they are, of course. I just have no idea as to why they’re so popular.

The idea of taking two distinct beverages and throwing them into the same glass has not always been met with the same success as the Arnold Palmer, which every third person seems to order at my restaurant during lunch service. If I remember correctly, the higher-ups at ABC television did their best to sell the concept of Milk and Pepsi to 1970’s America via Laverne Defazio. The fact that this drink did not become a trend remains high on my gratitude list every Thanksgiving. 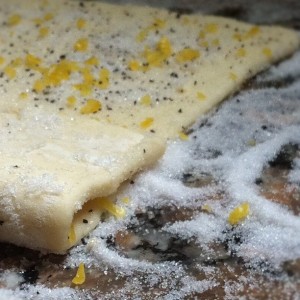 Whether or not Arnold Palmer actually drinks himself is unknown to me*. I would imagine a glass of the stuff has touched his lips from time to time, at least for publicity’s sake but, if he’s anything like me, he would wonder what in god’s name is so appealing about taking freshly brewed iced tea, mixing it with recently squeezed lemonade, and having it taste like something as artificial and commercially sponsored as a Nestea Plunge?

I just don’t get it.

But I am trying because a) I am a fan of both iced tea and lemonade, b) I often take hot tea with lemon, and c) it’s just something I need to get over because there are so many other irritations worthy of my time.

So, in an effort to warm up to the idea of the Arnold Palmer, I’ve decided to turn it into a cookie because, as one of my mentors is known to say, “A spoonful of sugar helps the medicine go down.”

Or ten, in this particular case. 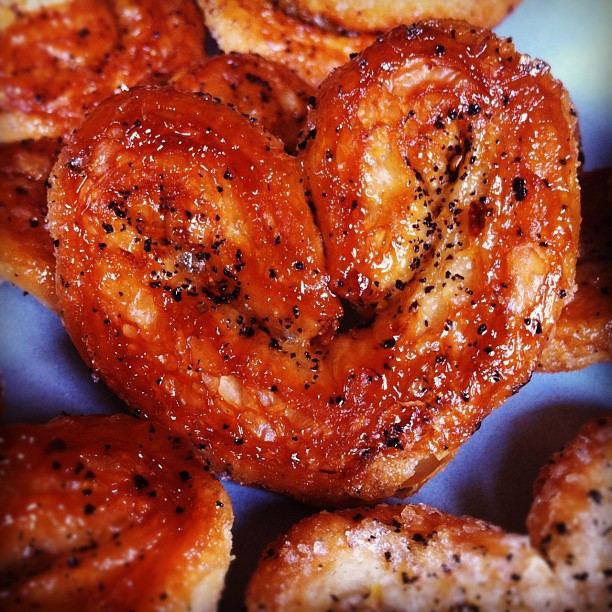 They just seemed ripe for the making.

Their flavor is as subtle as a golf clap, which is intentional. To make them as bold as a pair of golf pants would be too much for one’s mouth to bear.

Makes 16 to 18 cookies, depending on how good one is at measurements.

• One sheet of puff pastry, thawed. Or, if you are using frozen Dufour’s puff pastry like I do, one half of the sheet.
• 10 teaspoons of sugar
• 2 teaspoons of Earl Grey tea, ground as fine as black pepper cracked through a pepper mill.
• 2 teaspoons of finely chopped lemon zest. I prefer Eureka to Meyer in this case.

1. Pre-heat your oven to 400ºF. Line a baking sheet with either a silicone baking mat or parchment paper and set aside.

2. Combine sugar and tea together, set aside. (Combine them days ahead of time, if you happen to be a good planner. This will give the tea time infuse its scent into the sugar, like a great aunt’s perfume might permeate the clothing of a small child who has been excessively hugged.)

3. When the puff pastry is thawed enough to unfold without tearing, do so onto a clean work surface which has been littered with a generous scattering of plain sugar (NOT with the tea-sugar mixture). The sheet used in this recipe measures approximately 10″ by 10″. It is meant merely as a guideline. Other lengths and widths will work just fine as long as the dough is wide enough to be folded to a quarter of its original width. 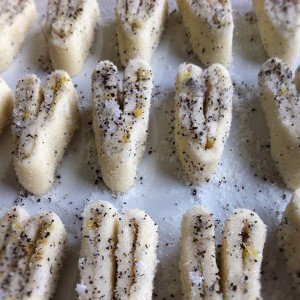 4. Cover the top side of the dough with a generous sprinkling of the tea sugar. Disseminate the lemon zest over the surface, then add a little more tea sugar, if you wish. Gently glide a rolling-pin over the surface to press in the sugar and zest.

5. Fold the bottom edge of your dough up to the center. Fold the top edge down to the center, so that the two edges meet in the middle. Sprinkle the surface with more tea sugar and again glide a rolling-pin over the top with all the force of an aged, asthmatic moth.

6. For the final fold, bring the bottom edge up so that it rests directly and evenly on the top edge (read: fold exactly in half.)

7. Sprinkle more tea sugar on top, do the whole gentle rolling-pin thing one last time. If the dough has become too warm at this point (read: if it feels as droopy as a retired wet nurse’s bosom) place the folded dough onto a tray and pop it into the freezer until it is once again pert.

8. Slice the dough into 1/2″ thick pieces. Wet your index finger, taking one cookie at a time, rub your moistened finger along the top and bottom of said cookie, dip each side into the tea sugar, then place on the same tray you used when you put the dough in the freezer. Repeat until all cookies have been fingered and sugared. Return your almost-ready-for-baking cookies to the freezer to chill for about 15 minutes.

9. Transfer the cookies to your lined baking sheet and place sheet onto the center rack of your oven. Bake for about 18-20 minutes (turning the sheet once in the middle of baking) or until browned. You will know when your Arnold Palmiers are ready because you will see that each one will have a small pool of caramelized sugar bubbling up from its bottom. At this point, remove from the oven, let cool for a couple of minutes, then transfer with a spatula to a cooling rack.

The truth is, I really don’t give a damn how you serve them, as long as you do it the same day as they’re baked. They’re marvelous in their heyday, but a little sad to think about when they have passed their prime. Much like some golfers I know. Except Mr. Palmer, I mean.

*An Arnold Palmer with a generous amount of vodka added to it is called a John Daly. This means that John Daly could quite literally drink himself to death, which would not be funny at all, given the fact that he is a recovering alcoholic.

**Well, there wasn’t one when I checked a week ago. I have since found another “Arnold Palmier”. No recipe, but it is savory, using lemon thyme and cheddar cheese. How this makes it Arnold Palmer-y remains uncertain to this author. However, they do sound delicious. The link remains elusive, but I will add it as soon as I can find it again.

I write about food and am very fond of Edward Gorey. And gin.
View all posts by Michael Procopio →
This entry was posted in Celebrities, Sweets and the Like and tagged Arnold Palmer, Arnold Palmiers, cookies, dessert, golf, lemon, puff pastry, tea. Bookmark the permalink.