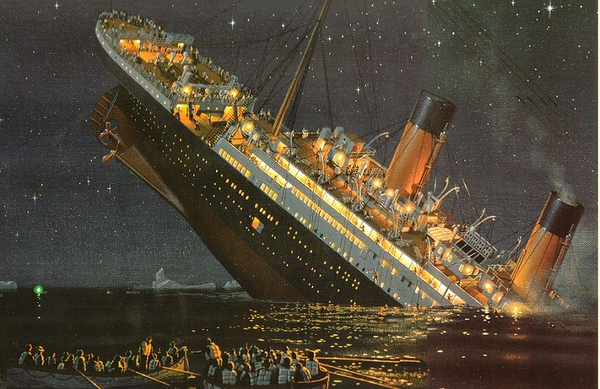 What is it about the Titanic that still has such a hold on people’s imagination one hundred years after its sinking? Was it the 1,517 people and 10 dogs* who lost their lives? Was it the sheer magnitude of the disaster? The lethal mixture of corporate hubris and human tragedy?  Céline Dion? Perhaps it’s a combination of all of the above.

As a boy, I played “Titanic” in the bathtub with a large toy boat and icebergs made of soap bubbles; hand-selecting which of my dozen or so plastic, armless Fischer-Price people would survive, which would freeze to death in the icy North Atlantic waters, and which would go down with the ship itself.

On the bow of my father’s real boat (a modest 1/25th the size of the ill-fated Titanic), I would quietly scan the Pacific between Newport harbor and Catalina for icebergs and pray we didn’t sink.

And then my brother introduced me to Irwin Allen’s The Poseidon Adventure, which added another, more unpredictable dimension of terror to my boating adventures. I promptly abandoned the iceberg search and instead sought out the best place to situate myself below decks in the event of our eventual capsizing.

As much as I was fascinated with the fantasy of a capsizing boat, as much as I loved to spout off Shelley Winters quotes, the thrall of a fictional disaster pales in comparison of a real one of greater magnitude. It has never really let go of its hold on my imagination.

With apologies to the ancestors of every Titanic passenger and crew member**, survivor or non-survivor, I’ve decided to not so much celebrate as commemorate the 100th anniversary of the sinking of the great ship. Or, more correctly, the not-so-great, as history has proven. 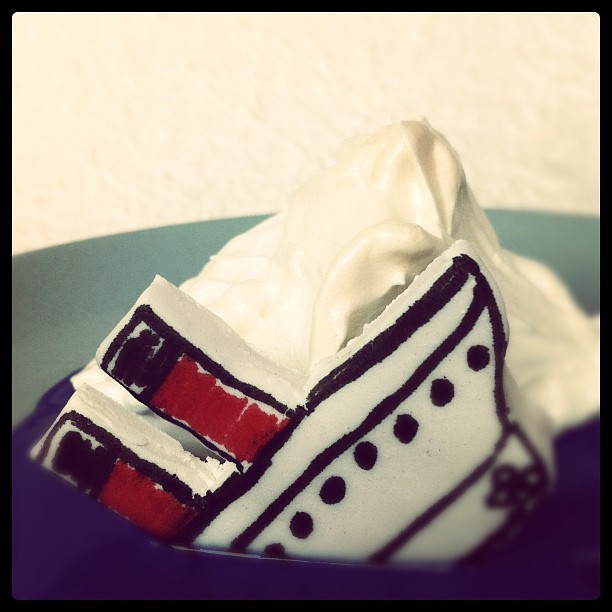 To my mind, there is no better way to commemorate the sinking of the Titanic in dessert form than with îles flottantes, otherwise known as “floating islands”. An innocent dessert popular at the time of  disaster, these cloud-like puffs of meringue floating in a sea of crème anglaise take on a much more sinister meaning if one colors the pale yellow sauce a deep, dark blue and adds an appropriate garnish.

Said garnish was originally to have been a toy boat sawn in half at a 45º angle until my friend Irvin off-handedly mentioned that I could make an edible version out of fondant. For this suggestion, I both thank and curse him. His decorative pastry skills are much better than mine. Much. 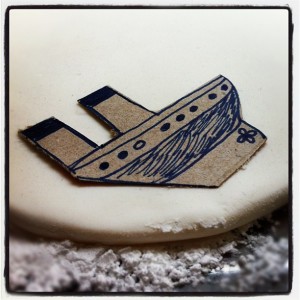 I designed and cut out a stencil from the back of a Lucky Charms box, which was simple enough. As was rolling out the fondant, which I found available only in bucket-sized quantities. My original line of thinking was that I would make my 1/2 Titanic garnish thick enough to stand up by itself on the plate, but my engineering skills fall into a distant second place to my own imagination and the poor little boats kept falling over and sinking into the murky blue.

In itself, my own little decorative disaster is entirely in keeping with the real one: The Titanic’s engineers hailed their ship as unsinkable, but their own skills took a back seat to their imagination.

I hope to improve my skills in time for my upcoming salute to the Wreck of The Edmond Fitzgerald which promises to be so delicious that it is guaranteed to disappear without a trace.

Makes 8 or 9 îles and small ocean of crème anglaise.

For the crème anglaise:

• 2 cups of milk
• 1 vanilla bean, slit open from stem to stern.
• 5 large egg yolks
• 1/3 cup of sugar
• Ice (for an ice bath to rapidly cool down the sauce and, appropriately, serve as a chilling reminder.)

• 5 large egg whites (which can be found, conveniently, in the same packaging as the 5 large egg yolks.)
• 1/2 cup of sugar
• A pinch of salt

For the little boats:

1. Pre-heat your oven to 200°F. Bring the milk and slit-open vanilla bean to a boil in a heavy-bottomed, medium saucepan, then remove from the heat, remove the bean, and scrape its tiny seeds into the hot milk for all you’re worth. The little flecks of black floating in your soon-to-be sauce may bring to mind hundreds of drowned men in dinner jackets. Offer a moment of silence to them and then proceed to the next step.

2. Whisk eggs yolks and sugar together in a medium-sized bowl. Whisk in the hot, black-flecked milk slowly and with constant motion. Pour the mixture back into the pan and cook over a fairly low heat until it starts to thicken (about 6 or 7 minutes). When the sauce is viscous enough to coat the back of a wooden spoon and more or less hold its shape when you run you index finger across the back of said spoon, it’s done. Suck finger. Wash hands. 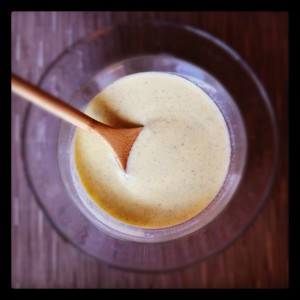 3. Strain the sauce through a fine sieve which has been set over a clean medium-sized bowl. Set the bowl in a larger bowl into which an ice-cube tray’s worth of ice has been unloaded. Whisk the sauce frequently until it is cool to the touch of your other index finger. Repeat finger sucking and hand washing. Cover and refrigerate. The sauce, not your fingers. When cold, remove the crème anglaise and add enough  food coloring to achieve the right shade of deadly-cold blue.

4. To make the meringues, prepare a baking sheet with parchment paper and spray with non-stick cooking spray if you’ve got it. If you don’t have it, I don’t know what to tell you because that’s what I used. Beat the egg whites with salt and 2 tablespoons of the sugar until they turn white and begin to show signs of fluffiness. Gradually add the remaining sugar and beat until the whites hold firm peaks. Dollop the meringue into iceberg-like mounts onto the prepared baking sheet and bake for about 30 minutes or until set. TO test doneness, spray a little of the non-stick spray on the tip of either one of your index fingers and gently poke one of the meringues (a non-sprayed finger will result in the tearing away of part of your meringue’s exterior). It should feel springy to the touch. At this point, I do not advise the sucking of fingers but I do recommend the washing of hands. Remove from the oven and let cool.

5. I feel mildly ridiculous telling you how to make the cut outs, since I am not especially enthusiastic about my own. However, if you really must know: Draw a template on a flexible but sturdy paper stock (the side panel of a cereal box is ideal). Cut out template. Please make certain to make your template an appropriate size. In this particular case, the iceberg which sank the Titanic did not tower over the ship, but the other way around.

6. To roll out the prepared, store-bought (if you’re one of those people who gasp at the though of store-bought fondant, I want to both hug you and punch you at the same time) fondant, dust a clean, cool surface by with a good sprinkle of powdered sugar to prevent sticking. Roll out fondant to desired thickness (thick enough to hold its shape, but not so thick as to give the impression that it was purchased at 2 am in a supermarket bakery). Cut out as many little boats as you desire with a sharp paring knife. Place cut outs on a clean, flat surface to let dry out. Overnight should be sufficient. Decorate with the ink from edible markers, if you’ve got them. If you don’t I suggest investing in them if you think you might enjoy writing on your food.

7. To assemble, place one meringue iceberg just off the center of a shallow plate. Next, gently spoon enough of the blue sauce around the iceberg to suggest submersion. Finally, lean your cut out boat next to the meringue and serve immediately. Or refrigerate and serve a bit later because, if you really want to be accurate, you’ve got two and a half hours to eat this dessert until the boat sinks.

*These are approximate figures, since there is no strict agreement on the number of passengers on board. One thing which is certain, however, is that one of the surviving dogs was a Pekinese named Sun Yat Sen.

** I need not offer them to any remaining survivors because there aren’t any– Milvinia Dean was the last (and youngest). She passed away in 2009. She had been quoted as saying that is was “disrespectful to make entertainment of such a tragedy.” To her, I would say that no offense is intended.

I write about food and am very fond of Edward Gorey. And gin.
View all posts by Michael Procopio →
This entry was posted in Stage, Film, and Television, Sweets and the Like and tagged 100th anniversary of the Titanic, creme anglaise, dessert, disaster, floating islands, ile flottante, meringue, The Poseidon Adventure, Titanic. Bookmark the permalink.