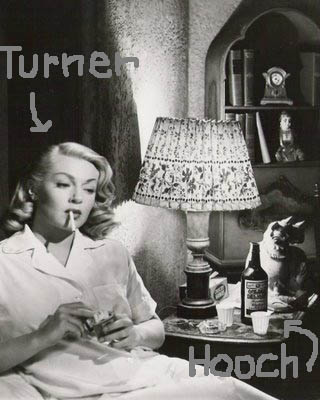 I'm sorry I had to spell it out for you.

A few weeks ago, as I was curating a selection of films to watch over the approaching weekend, I was insulted by Netflix. Based upon my recent viewing of Dr. Who: City of Death, the incomprehensible algorithms* of that troubled company thought I would very much like to see Turner and Hooch, a 1989 Tom Hanks vehicle that is best forgotten, but largely remembered for his co-starring with a large, slobbering Bordeaux Mastiff.

I was both amused and irritated by the suggestion– two states of being I find easy to achieve.

Nothing on earth was going to induce me to give up 1 hour and 39 minutes of my life to that movie, but I couldn’t get that title out of my head. As I lay in bed considering the film, the image of Tom Hanks was gradually replaced by Lana Turner; the over-sized dog by a family-sized bottle of booze. Now that’s my kind of cinema.

If I had to think about Turner and Hooch, it was going to be on my terms. And my terms generally involve cocktails. 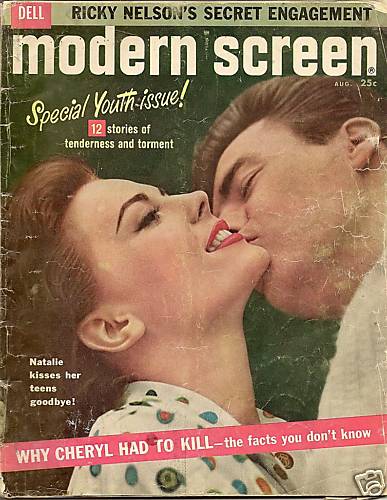 As I dug into the life of Miss Turner for a little inspiration, I was surprised to discover that murder helped propel her celebrity trajectory, both directly and indirectly. And not once, but twice.

The more famous of the two deaths was the fatal stabbing of her mobster lover, Johnny Stompanato by Miss Turner’s 14 year-old daughter, Cheryl Crane.

Stompanato was stocky, abusive thug who served as a bodyguard for Mickey Cohen but once had the living daylights beaten out of him by a pre-James Bond era Sean Connery. On the evening of April 4th (Good Friday), as he and Turner argued in her bedroom, things turned violent. Cheryl heard her mother’s lover threaten to kill her, ran to the kitchen, and returned with a large knife which she then proceeded to use upon his midsection. The trial, at which some people say Turner gave “the performance of her career”, was one of the most sensational of the 1950’s. Stomapanato’s murder was ruled a justifiable homicide.

The lesser-known murder went unsolved. On December 14th, 1930, having won some money at a craps game, Lana Turner’s father stuffed his winnings into his left sock, but never made his way home. He was found dead near the corner of Mariposa and Minnesota Street in San Francisco**, his left shoe and sock were missing.

The demise of Turner’s father prompted her mother to move them to Los Angeles, where Lana was discovered a few years later sipping a soda at the Top Hat Cafe***; the notoriety of her lover’s offing re-energized her career, making her an even bigger star in the late 1950’s as a world-weary woman wronged than she had been in the 1940’s as a tight-sweatered bombshell.

Hollywood– it’s murder, I tell you. 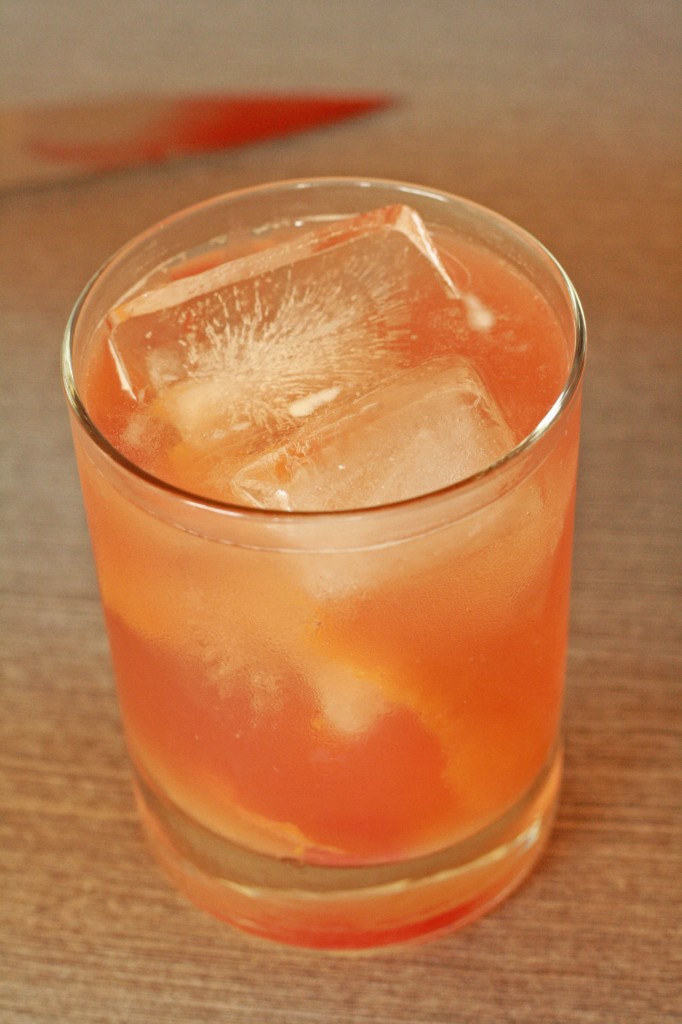 Your cocktail is served.

This cocktail is essentially an old fashioned, but with a bloody, bitter twist. It’s a bit rough on the kidneys but, then again, so was that kitchen knife. 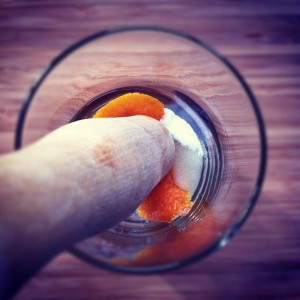 A delicious muddle, if there ever was one.

1. To make the Campari syrup, place one cup of Campari into a small saucepan over medium heat. Reduce until a sticky, blood-like consistency has been attained. You should have about 1/3 cup of liquid. Cool and reserve.

2. In an old fashioned glass (which refers to the specific shape and size of the vessel, not its turn-of-the-last-century quaintness) add sugar, orange peel, and bitters. With a wooden muddler, beat the hell out of the ingredients. 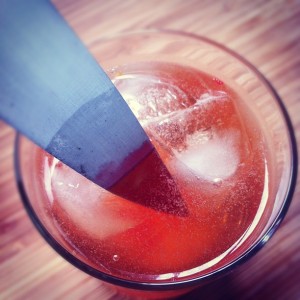 How to mix a Stompanato.

3. Once the sugar, orange peel, and bitters have been thoroughly subdued, soothe their bruises with enough ice cubes to reach the top of the glass, then dull their pain with the whiskey.

4. Fill the glass to the top with club soda.

5. To finish things off, take a large kitchen knife and dip the tip of it into the Campari syrup, then plunge the knife into your Stompanato, twisting and turning until the cocktail is thoroughly mixed.

*One possible explanation is that this film was foisted upon the general public on July 28th, which also happens to be my birthday.

** Which is still a very sketchy neighborhood.

*** Not Schwab’s, as legend would persist.

I write about food and am very fond of Edward Gorey. And gin.
View all posts by Michael Procopio →
This entry was posted in Celebrities, Liquids, Stage, Film, and Television and tagged Cheryl Crane, cocktails, Hollywood, Johnny Stompanato, Lana Turner, murder, Stompanato cocktail, Turner and Hooch. Bookmark the permalink.