(Not) My Grandmother’s Panna Cotta 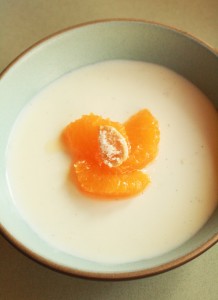 This is not your grandmother's panna cotta. At least, it's not mine. And thank heavens for that.

My grandmother was a fantastic cook, as most of us like to think our grandmothers (especially the Italian variety) are. Her tomato sauce was the standard to which all others were held, her translucent ravioli begged for and savored, her minestrone the best I ever attacked with a spoon. Sadly, there was one, gaping hole in her repertoire: desserts. She just didn’t seem to be interested in making them.

Of all the adjectives that come to mind when I think of her– loyal, protective, organized, tasteful– sweetness is one word that never enters in. So I suppose her lack of interest in sugary confections was within keeping with her personality. She left those things to her sisters.

I don’t mean to say she never kept sweets around. There were dainty candies in little dishes held prisoner under heavy leaded crystal lids in the living room and there was almost always a package of Stella D’Oro cookies on hand for guests, but the only desserts my grandmother ever made herself were the uninspired, quivering kind: raspberry Jell-O, Royal brand chocolate pudding, and the most boring of all, panna cotta. Or panna cot’ as she liked to call it.

The rest of us, however, called it Milk Jell-O– a name which tells you everything you need to know in terms of a) its texture, b) its vapid flavor, and c) our attitude towards it.  We avoided it, of course, leaving it to a skin-developing, cold-cracking fate in the back of the refrigerator with the other gelatinous forms.

Twenty-some years later, when I began waiting tables at an inexplicably hyped-up, trendy Italian Mom& Pop joint, I couldn’t believe my eyes when I read that panna cotta was on the menu. More correctly, I couldn’t believe there were people who expected that anyone outside of a nursing home would a) enjoy or b) pay for such palid fare. 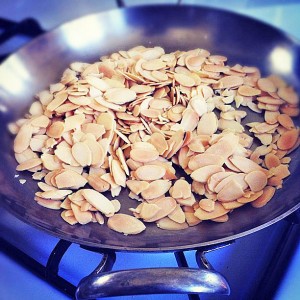 Toasted almonds. Not in the least bit as bitter as the author can be.

Then I tasted it, was completely shamed, regrouped my thoughts, and called my cousin, the San Francisco pastry chef. Our conversation went something like this:

“Oh gawwwwwwwwd. My restaurant is serving panna cotta, ” I cried into the phone.

“Uh huh. But it’s actually really (expletive) good. They make it with buttermilk,” I responded, not quite believing what I was saying.

“Huh. Buttermilk.” I could hear her brain whirr and click. “I need to try this.”

And she did. She came, she ate, she was won over. Just like I was.

I haven’t set foot in that restaurant since the beginning of this century for reasons which are best illustrated by a quote from my panna cotta-making grandmother in response to my non-appearance at her 50th wedding anniversary party:

“Michael, I have decided to forgive you, but I will never, ever forget what you did.”

Oh, those Sicilians. They sure do know how to hold a grudge. Fortunately, they also know how to make great desserts. Except, of course, for my grandmother*. 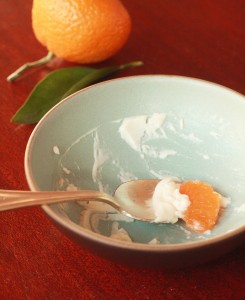 The bowl was inevitably, privately licked.

This recipe is as durable as it is delicious. If you wonder what it is I mean by “durable”, please read through the directions.

Some people may prefer an “almond buttermilk panna cotta” to taste more like almonds, in which case you are more than welcome to add a few drops of almond extract to it. I just happen to like gentle hints of things from time to time. No, honestly.

Also, I’m not a big fan of un-molding things. Even though this dessert is good enough to stand alone, I prefer to not look at it standing. I like mine in a bowl. Or cup. Or in my mouth.

1. Soften gelatin in 1 tablespoon of cold water in a medium sized bowl for approximately five minutes.

2. Put cream and sugar into a small saucepan, scrape seeds from the vanilla pod into the cream and, once spent, add the pod. Now add the almonds. Heat the cream until the sugar dissolves (about 3 to 5 minutes).

3. Take phone call from your mother as you are heating and stirring the cream. Explain in detail just why it was you decided to have dinner with your exboyfriend. Turn off heat, wander into your living room to explain further. Return to kitchen, stare at cream for a moment, then look over at the gelatin which has been sitting for much longer than five minutes. Take a minute to say hello to your sister and then realize that you have not purchased enough buttermilk for the recipe. Say a hasty goodbye to your sibling, then run to the nearest buttermilk-selling store.

4. Return home believing you may very well need to throw out what you think has been destroyed by neglect and start fresh, but the little voice inside your head that you don’t always listen to tells you to give it a chance.

5. Reheat the cream until warm, then strain through a fine sieve into the gelatin, stirring until the gelatin no longer feels gelatinous. Add buttermilk and stir until all is well-incorporated. Strain the mixture again, but this time into another vessel, preferably one with a pour spout, like a large Pyrex 4-cup measuring cup.

6. Divide between 4 to 6 ramekins, bowls, cups or whatever it is in which you plan to serve your panna cotta. Cover loosely with plastic wrap and refrigerate for at least 3 hours.

Serve with sliced tangerine, berries, jam, pomegranate seeds– whatever you like. Or just eat it on its own. Or with a friend. Or 3 to 5 of them.

Just don’t throw it away.

*But I could care less, because I would sell a kidney for one last taste of her ravioli.

I write about food and am very fond of Edward Gorey. And gin.
View all posts by Michael Procopio →
This entry was posted in Sweets and the Like and tagged almonds, buttermilk, buttermilk almond panna cotta, dessert, panna cotta, Sicilian grandmothers. Bookmark the permalink.

24 Responses to (Not) My Grandmother’s Panna Cotta