Posted on January 2, 2012 by Michael Procopio 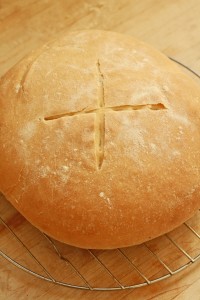 It wasn’t very good bread. In fact, it was rather the opposite: under-proofed, under-flavored, and a trifle under-baked. Frankly, I couldn’t give a flying squirrel whether it was the most delicious sandwich loaf ever to hit my cutting board or if it was better suited as a flooring tile. What’s important is that I woke up wanting to bake bread. By myself. In my boxer shorts.

It just happened. And the fact that I don’t give a Flying Dutchman if it was a lousy loaf makes me even happier. Just read my last post if you don’t believe me. It’s right there below this one, which is where last posts typically belong.

Besides, if there’s one thing I’ve learned this year, it’s that toasting fixes everything. 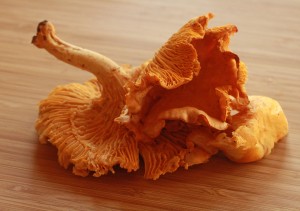 My last social interaction of the Old Year was a surprise visit by my oldest friends, The Rosas. They had been mushroom foraging up north and asked if they could swing by my place on their drive home to share their bounty with me. My kitchen and living room were a mess, but I didn’t give a flying saucer (actually, I did, but it was merely the size of a demitasse). I was shown Black Trumpets, Pig’s Ears, Chanterelles. They left me with some of the last and wished me a Happy New Year.

It was an appropriate end cap to a year filled with kind people doing generous things. And I do mean filled. 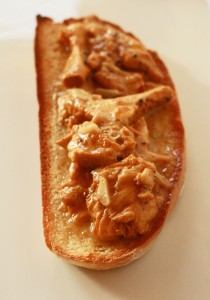 I’m not going to dive in too deep looking for meaning. I don’t have to. I have so many delightful people in my life. I woke up on the first day of the New Year feeling un-characteritically self-reliant. I decided that my first meal of the year should be made from last year’s mushrooms and this year’s bread. None of it should be wasted, no matter how crappy the bread turned out.

And that’s basically it. Not so much in a nutshell, but served up on toast.

Happy New Year to all of you. Thanks for reading and for all of those smart, thoughtful, clever comments in 2011, which have sustained me like you-wouldn’t-believe. Now that I do give a flying carpet about.

I write about food and am very fond of Edward Gorey. And gin.
View all posts by Michael Procopio →
This entry was posted in Holidays, Rants and Stories and tagged bread, mushrooms, New Year's, thanks, toast. Bookmark the permalink.