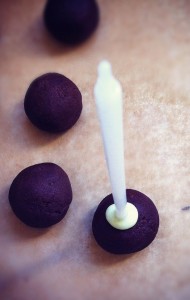 Last summer, I made the mistake of letting my twelve year-old goddaughter thumb through a copy of Matt Armendariz‘s On a Stick!, which he had been kind enough to send me.

“Omigodcakepops!” she gasped and held open the pages as if looking at a pornographic centerfold. “I want these for my birthday!”

Her birthday was about six months away, incidentally. I had suffered through helping her bake rainbow cupcakes for her last birth anniversary, I’d be hanged if I’d stand by and let cake pops take over the next. I debated sending Mr. Armendariz a letter of complaint, but she was so in love with the idea I didn’t have the heart to say no. Instead, I offered a compromise: 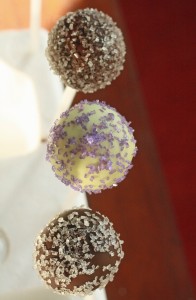 “Tell you what. I think you should have an actual cake on your birthday, but we’ll make cake pops, too. We can decorate the cake with them. The sticks will look like candles.”

To which she added: “Wouldn’t it be cool if the sticks were candles?”

Over Christmas, I reminded the young lady of my promise to make the cake (pops and all) and asked her to clarify her preferences.

“Purple velvet ice cream cake with cream cheese frosting. Oh! And the cake pops!*” It was the fanciful, impractical request of a child. As her slave, I did her birthday cake bidding. 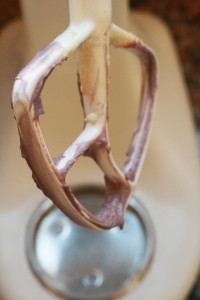 I wanted the cake to be incredible, but am mercifully aware of my own cake-decorating limitations. After all, I am no Gail Dosik. I cheated twice. First, by not making a true velvet cake; second, by not churning my own ice cream. Pistachio. Her request, which is not the typical ice cream request of a child.

Things didn’t go smoothly. Birthday candles warped under the weight of drying cake pops.  The color of the ice cream was more glowing uranium than pale pistachio; it bled and seeped as I raced to spread it over the cake’s bottom layer. In my haste to freeze it, I jammed it into the freezer in such a way that the door could only be re-opened by force, which caused the cake to smash against the side of the appliance. I neglected to make enough cream cheese frosting to cover the scars and bright green oozes and bruises. But, after a little champagne and minor cursing, it didn’t matter. 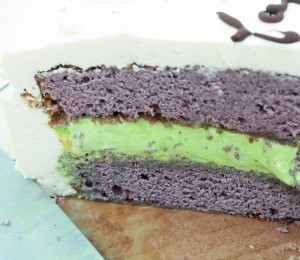 The neon guts of the thing.

What mattered, I suppose, was that a throng of teenaged girls loved it. Well, they loved the cake pops certainly. They ate what was underneath when there were no more of them to devour. What (seemingly) took forever to produce was gone in no time.

The cute toddler who referred to dump trucks as “dumb fucks”, the precocious three year-old who knew the difference between French and Swiss gruyère cheese, the five year-old who invented her own superhero persona is growing up.

Fast. She’s on Facebook. She just got her own phone. She wonders why some boys look at her funny, which is more than likely because she’s growing into a really attractive young woman. It’s almost enough to make me understand the appeal of burkas. And I’m only her godfather.

It will be interesting to see what the next thirteen years bring her.

For her twenty-sixth birthday, I do not see myself baking her a cake, but rather buying her champagne. In a tony, decaying bar in Venice (if it’s still above water in 2025). As the lowering sun filters through the warped and filmy ancient windowpanes, which will cast dramatic shadows over our profiles, we will discuss her recent string of lovers and rate their merits and flaws and suitability (I am, after all, her church-sanctified moral advisor): The Margrave’s son, The Bullfighter, The Aviatrix. She will take my advice to heart, but arrive at the decision on her own:

Which will be not to marry until she’s thirty. And only to someone who will appreciate her for the smart, beautiful, geeky, challenging, wonderful  woman she will be.

In the meantime, I pray we all survive her teens. I’ve bought her a year’s subscription to The New Yorker to help ease the transition. Whether or not it will most benefit the birthday girl or her parents remains to be seen. 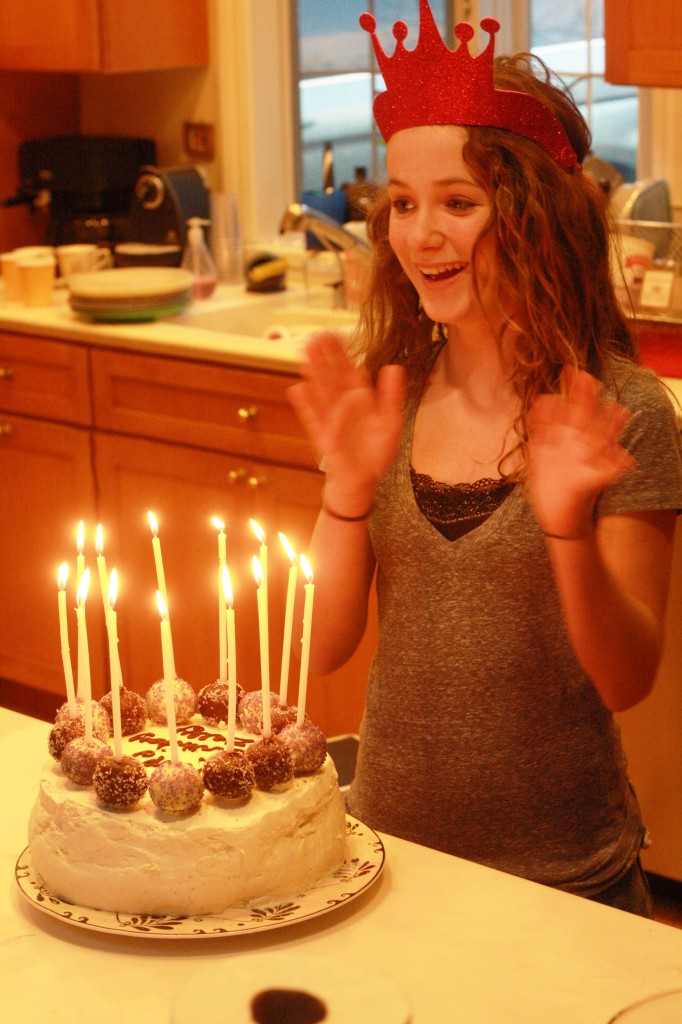 * There is no recipe for this cake, because it was made one time only, for one person only.

I write about food and am very fond of Edward Gorey. And gin.
View all posts by Michael Procopio →
This entry was posted in Holidays, Rants and Stories, Sweets and the Like and tagged birthday cake, cake pops, goddaughters, godfathers, growing up, ice cream cake, the new yorker. Bookmark the permalink.