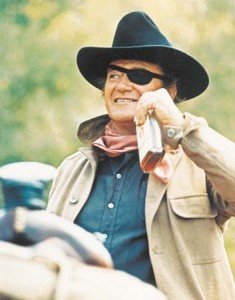 When I was a boy, my father owned a little cabin cruiser named “Cope”. It was the name the boat came with, but it suited him– and me– just fine, since it is both the emphasized syllable of our last name and a verb my family has always worked very hard to master.

He kept the boat moored at a slip in Newport Harbor in exchange for dental work with one of his wealthier patients. Occasionally, he would take the boat out deep sea fishing. In my memory, however, its sole purpose was to take me to see the opal fish that swam around Catalina Island.

On one of our excursions, my sister took me by the hand and lead me out to the bow of The Cope as my father steered the boat through the harbor in the early morning haze, hugging the watery edges near the houses where people with money and boat slips of their own lived. As we approached one such home, my sister noticed an old man leaning his terrace railing. Pointing at him, she exclaimed, “Hey, that’s John Wayne!” It got his attention.

The most famous movie cowboy in history was standing a few yards from me, sipping coffee in an old burgundy-colored robe. I waved to him and smiled. He waved back. It should have been a simple, brief encounter between a movie star and a five year-old boy except for one, important detail:

He wasn’t wearing any briefs. Or boxers, for that matter. 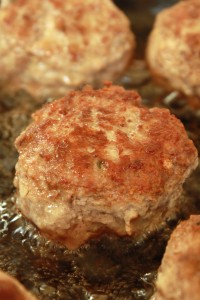 As he waved back at me, he crouched down on his haunches to get closer to my eye level, as adults often do when responding to friendly advances of adorable children. Unfortunately for him, his robe opened slightly. It was a subtle parting– the material that covered his legs spread wider than it should have, revealing the impression of something bulbous dangling between his thighs. He was clearly unaware of what happened. But it happened. I am certain of it.

My first glimpse of another man’s genitalia was from an aged, Oscar-winning icon. I didn’t know what to do with the information, so I filed it away in my memory. It had no scarring or fetishizing impact on my life beyond dreaming about taking baths with Michael Landon (as Little Joe from Bonanza). In these dreams, we wore nothing but our cowboy hats and played with my Fisher-Price house boat in the bathtub.

A few years ago, my sister told me she didn’t remember the incident, which lead me to think my mind had played some voyeuristic trick on me. Was it all in my head? Why would a five year-old make something like that up? I was beginning to distrust my own memory. That is, until life handed me a random moment of confirmation.

One evening at work, a couple was seated at one of my tables ten minutes after our official closing time. I hid my annoyance as best I could. They apologized for being late– their plane flight was delayed and they just got engaged that evening. The woman extended her hand and flashed her newly-won diamond ring. Under the circumstances, there was no way in hell I was going to rush them. I coursed their food and filled their glasses. I left them to enjoy their meal in loving peace.

At the end of the meal, however, I asked them where they flew in from. “Orange County,” the man replied. I told him I was from Anaheim, he told me he was from Newport Beach. And then the woman blurted out something random-sounding, but extremely helpful:

“His grandfather was John Wayne!” He seemed a little embarrassed by the outburst, but she seemed very proud to be marrying into the family.

I told him about how my father kept his boat near his grandfather’s house. I even went so far as to mention that my brother is his grandfather’s current neighbor at Pacific View cemetery. But I made absolutely no mention of genitalia.

I did, however, take the opportunity to get some sort of confirmation of my childhood glimpse.

“I remember seeing your grandfather out on his terrace when I was a kid, sipping coffee and wearing a ratty old burgundy robe.”

His eyes widened. “Oh my god. I remember that robe!” was his nostalgic, but memory-verifying response. I knew I didn’t imagine it.

I may forget names, I may forget faces, but I can tell you one thing: I never forget a naked celebrity. Now please remind me to tell you about the time I woke up to find Clint Eastwood naked.

What is it about me and unclothed famous Western cinematic icons? 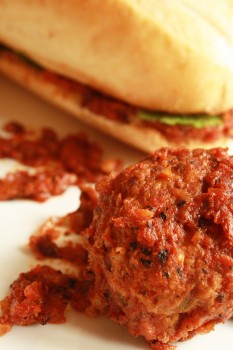 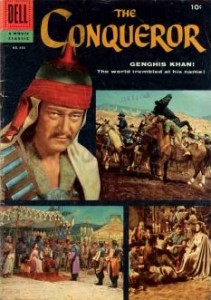 I’ve kicked this meatball idea around for ages, but was never certain how to approach it. Which genre to apply to a recipe that is to represent the œuvre of a movie legend? His naval films didn’t seem correct– soaking meatballs in brine just felt wrong. Do I salute his turn as Genghis Khan in The Conqueror by making a Mongolian- inspired dish brimming with carcinogens? That would be in very poor taste and no one would eat it. The Quiet Man-wich? That is an idea too intriguing to leave alone, but it isn’t right for this particular posting.

No, a Western-themed meatball sandwich seemed in order. Rio Bravo-meets-The Alamo. Tex-Mex on white bread. It’s what I imagine cowboys would make if they had a lot of time on their hands to bake sandwich rolls and go cilantro-picking. And, though it’s meatballs we’re talking about, I have done my best to steer clear of anything smacking of Spaghetti Westerns. I’ll leave that for my Clint Eastwood post.

Makes 17 meatballs. 16 regular-sized balls and one that is slightly larger, which my doctor says is perfectly normal.

For the tomato sauce:

For the sandwich assemblage:

1. In a food processor, purée tomatoes until a fairly smooth consistency is achieved. Some lumps are to be desired. Set aside.

2.In a large sauté pan (I’m using an 11″ pan, which is able to fit all 17 meatballs), heat olive oil over medium heat. Add onions and gently cook them until softened (about 3 minutes). Add minced garlic and sauté for 1 minute longer. Next, add tomatoes. Bring to a simmer, then add chili powder, cinnamon, cumin, salt, pepper, and bay leaf. Keep the sauce at a gentle simmer, covered.

3. To make the meatballs, place all three ground meats in a large work bowl, creating a well in the center into which you will add the eggs, milk-soaked bread crumbs, diced chilies, salt, and pepper. Mix thoroughly but sparingly with your hopefully-clean hands. 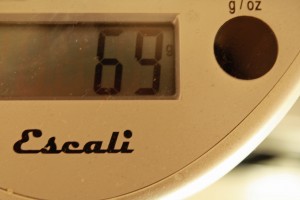 4. To form into uniform balls, it is best to weigh your meat. The specific weight chosen for John Wayne’s meatballs is 69 grams. The reason for this number is obvious and not at all what you are thinking, so you can just stop that right now. John Wayne received an Oscar– his only one– for his 1969 role as Rooster Cogburn in True Grit. It is the same weight I would give to Maggie Smith’s balls for her performance in The Prime of Miss Jean Brodie, should I ever bother to make them.

5. Cup the balls gently in your hands to form, one at a time.When all are nicely shaped, heat 1/2 cup of olive oil in a cast iron skillet over medium-high heat. When the oil begins to sizzle, add half of the meat balls to brown– 3 to 4 minutes on each side. When they are as brown as nuts and thoroughly crusty, you may place them into your simmering tomato sauce. Repeat with the other half of the meatballs. AT THIS POINT, ADD ABOUT 3 TABLESPOONS OF HOT COOKING FAT TO THE TOMATO SAUCE. Stir in. Let the meatballs cook in your gently-simmering sauce for at least 30 minutes before serving. 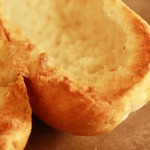 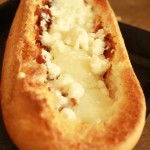 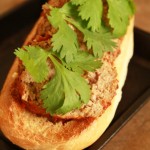 6. Slice your rolls in two. Hollow out the top half of the bread and either discard or eat its innards. Turn on your oven to broil and place rolls under the flames until they are warm and lightly toasted.  Remove from oven.

7. Fill the top half with tomato sauce and a mixture of shredded Monterey Jack and crumbled Cotija cheese. Place this half of bread back under the broiler until cheese is sufficiently melted. Remove from oven.

8. Take two meatballs* and slice them in half. Lay them cut-side-up into the top half of your roll. Cover them with fresh, clean cilantro leaves. Slather the bottom part of your roll with tomato sauce and then place it, sauce-side-down onto your meat-filled top.

9. Invert and enjoy. If you are eating this particular sandwich in private, have fun. However, if you choose to do so in public, make certain to carry with you plenty of napkins. I’d hate to think of the explaining you’ll have to do when someone asks, “What’s that on your chin?”

It is to be avoided.

* I had considered using three meatballs for this recipe, but the third one kept slipping out of the bread. Feel free to stuff your sandwich with as many as you dare.

I write about food and am very fond of Edward Gorey. And gin.
View all posts by Michael Procopio →
This entry was posted in Celebrities, Meatness, Rants and Stories and tagged celebrity genitalia, childhood memories, John Wayne, meatball sandwich, meatballs. Bookmark the permalink.