My 2-for1 Muppet avatar, according to friends

One early summer evening in the Miracle Mile district of Los Angeles, some friends and I found ourselves sitting around the living room of the apartment I shared with my roommate Craig. The shades of the curved bank of Streamline Moderne windows were pulled down to keep the heat outside in check, but a bottle of tequila was passed around which seemed to stoke our inner fires, causing us all to examine our lives in the deep, meaningful ways that only those just old enough to legally drink can do.

“If you were a muppet,” our friend Halle asked, ” Which muppet would you be?” She then clarified, for some unspecified, fermented agave-driven reason, that said muppets must be chosen from The Muppet Show and not from Sesame Street or Fraggle Rock which, I assume were considered too juvenile an idea to be entertained by such newly-minted adults as ourselves.

Halle chose Scooter, Kermit the Frog’s gofer-cum-stage manager; Craig went for Fozzie Bear, which was appropriate at the time because he was entirely lovable and told corny jokes. Our friend Doug, I believe, was the serious-looking Sam the Eagle; Craig’s girlfriend Shannon, who was not present, was branded Miss Piggy for no discernible porcine reason. When the time finally came for me to choose my muppet avatar, I came up blank.

I thought I might make a good Kermit because I was accustomed to emceeing events, avoided the attention of pursuing females, and was rather inclined to moody self-reflection. However, before I could announce my decision, Craig did the choosing for me:

“Oh, you’re definitely those two old guys who sit up in the balcony criticizing everything.”

“Totally!” Everyone present agreed. We were all from Southern California, so the choice of affirmation was fitting.

Was this what my friends really thought of me? Did I come across as some prematurely-aged curmudgeon, sitting apart from the action– above it all– hailing down criticism? Apparently so.

There was no use getting defensive about it, because I knew Craig had nailed it– and me. Of course, he didn’t even know their names. None of us did at that moment.

Statler and Waldorf– those were the names.  Two for the price of one. And I knew why they were right for me.

Having many friends in the theatre department, I quickly developed a reputation for giving honest appraisals of the acting ability of anyone who dared to asked. And they all asked because actors are, by necessity, masochists. None of them, it should be noted, are acting today. Perhaps if Jack Black, who was starring in a number of one-act plays on campus had come to me, the world of cinema might have been a safer, funnier place without him. But he didn’t, because I did not know him. 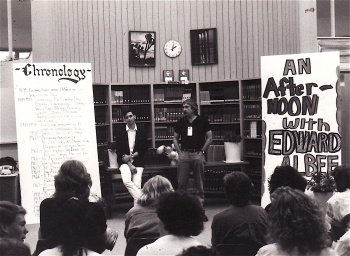 Making enemies in the audience.

I had also shared with them an anecdote about the time I had written a short play in high school about two retired theatre critics who described in graphic detail the ways in which they would like to torture bad playwrights. This very much upset everyone present, including Edward Albee, who with barely concealed anger called me up to explain my work. When he realized I wasn’t mocking him, but rather everyone else in the room, he laughed and chatted me up, much to the continued horror of the audience.

It is one of my most cherished memories, however much it branded me for life. But I didn’t much enjoy seeing myself as the guy who could rip anyone or anything apart, just because he could. Or, more correctly, because he needed to posture himself as superior whenever he felt threatened or inferior.

Oh, the joys of adolescence.

Given the fact that Statler and Waldorf reserved some of their most withering heckles for Fozzie Bear, I am now doing a mental search of my years living with Craig and wonder if I was somehow unduly harsh to one the the kindest people on the face of the planet. If I did, he probably wouldn’t tell me– he’s much too nice a guy.

It’s interesting to see how people change over the years. Craig is just as kind as he was twenty years ago, but his humor is deeper and richer than anything Mr. Bear would ever come up with. And– get this– Halle is Executive Vice President of Children’s Entertainment at The Jim Henson Company. True story.

As for me, I’d like to think that the man I am today is much more diplomatic and secure than the man-boy I was twenty years ago. Though I’ll never totally rid myself of my Statleresque/Waldorfian nature, I have high hopes of greening myself with a dash of Kermit. Or maybe I could add a whiff of Animal, just to keep things exciting.

Just never, ever refer to me as The Swedish Chef or I will rip you to shreds. 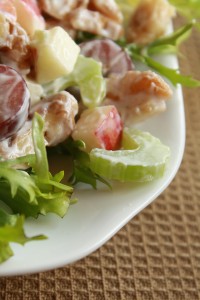 The Statler and Waldorf Salad

This is, of course, essentially a classic Waldorf salad. The major difference is that the sweetness of the apple and grapes is counter-attacked by a delightful dose of bitterness from frisée lettuce. If this doesn’t appeal to you, feel free to criticize. I know I would, if I were you.

I had considered adding rotten tomatoes to be thrown directly at the salad, à la messers. S & W but, since this salad is named for them, it hardly made sense, since they would never dream of doing such a thing to themselves.

• 1/2 cup red seedless grapes, halved as though one were about to feed them to a baby one does not wish to make choke.
• 1 sweet-tart apple, cored and chopped, but not peeled. I’m a Northern Californian, so I like Gravenstein.
• 1/2 cup celery, thinly sliced
• 1/2 cup toasted walnuts, sliced in half as if performing a radical, emergency lobotomy.
• 4 tablespoons of mayonnaise. I live west of the Rockies, so I cannot use Hellman’s.
• 1 tablespoon fresh lemon juice
• 1 teaspoon honey, if there are still enough bees alive to produce it.
• Frisée lettuce for garnish
• Salt and pepper to taste

In a medium sized bowl, whisk mayonnaise, lemon juice, and honey until well incorporated. Add salt and pepper to your own heart’s desire and personal sense of taste. Toss in grapes, apple, celery, and walnuts. Toss well, then heap upon a bed of frisée.

I write about food and am very fond of Edward Gorey. And gin.
View all posts by Michael Procopio →
This entry was posted in Celebrities, Salad, Stage, Film, and Television and tagged criticism, Edward Albee, muppets, Statler and Waldorf, The Muppet Show, Waldorf Salad. Bookmark the permalink.

30 Responses to The Critic’s Choice