Gin Blossom Dearie or, What I Learned from Schoolhouse Rock. 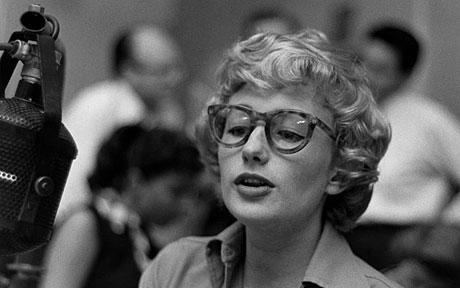 Once upon a time, when the world was young, there existed an animated educational series which aired on Saturday mornings entitled Schoolhouse Rock. If you are anywhere near my age– or younger, perhaps– you know it well. The songs were catchy, fun and informative. It is the sole reason that many of my generation know the Preamble of the United States Constitution by heart.

There was one song in the series, however, that unnerved me. Ostensibly a memory aide for multiplication, “Figure Eight” is a surreal look into a classroom-bound girl’s daydream of figure skating, which includes: a little boy’s near-death from hypothermia, a muffler-clad octopus, and finding herself wedged between the legs of Uncle Sam. I sensed a darkness to this song, which surfaced like the blinking, periscope-encased eyes that emerge from the cartoon’s broken ice. And the voice that lent itself to the lyrics was unsettlingly childlike. It was so creepy to me that I felt the need to leave the room every time it aired.

Many years later, my college roommate Craig came home with a compact disc he said I absolutely had to listen to– Needlepoint Magic by Blossom Dearie. “It’s the woman who sang the adjectives song from Schoolhouse Rock!” was all he said. I planned to listen politely in order to humor him. I was going to sit there for a few minutes with a fake smile on my face, pretending that I didn’t loathe this woman whose name was as childish as her voice; this woman who had historically sent me running away from my much-beloved television.

And then it took about 30 seconds to realize that I actually loved everything about this woman’s voice. Sure it was childlike, but there was clearly an adult behind it. It was witty and wistful. It was thin– almost fragile-sounding– but it was beautiful. 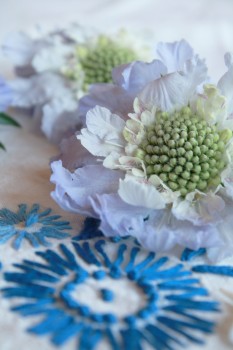 The Scabiosa is not technically a blossom, but its name was irresistible. Please forgive.

Someone once said of Miss Dearie that her voice couldn’t reach the second story of a doll house, but I could care less. Anyone who can take a song as saccharine as Tea for Two and turn it into something seductive earns a permanent place in my heart.

We listened to her all summer long.

On a trip to New York one Autumn several years later, I conned my boyfriend into seeing Miss Dearie at the now-defunct Danny’s Skylight Room– a small, dingy cabaret space tucked behind Danny’s Seafood Palace on W. 46th Street.

As we walked in from the cold, I noticed a tiny blonde woman in a pale yellow twin set standing up from her stool at the bar after polishing off a plate of food. She made her way to the host desk, where my boyfriend immediately handed her his coat and scarf. She hesitated a moment at the gesture, then smiled and asked for my coat as well.

“For God’s sake, that was Blossom Dearie, not the hat check girl,” I said, more than a little mortified.

“How the hell was I supposed to know who she was?” he replied. I couldn’t think of a good answer before she returned from the closet with our ticket.

All I could think of to say to her was “thank you.”

As we sat in the back of the darkened, tiny cabaret, I looked at the other members of the audience as we listened to Blossom play. I was struck by the fact that my boyfriend and I were the only couple in there who could not qualify for AARP. More importantly, I was also struck by the idea that all of these couples seemed to be very much in love. I looked over at my boyfriend, who looked attentive, but bored.

I pushed the stale New York cheesecake I’d ordered around in its strawberry goo with my fork. We weren’t in love. It hit me that we would never grow into an old couple who sat holding hands, listening to cabaret singers. I downed what was left of my second two-drink-minimum gin martini.

I felt trapped both inside and out. If a fire had broken out, we would all have burned in its flames. Much more than could be said for my relationship, I thought, which never caught fire in the first place. I wanted to drown myself in another martini, but thought better of it. Instead, I let myself be taken in and under by the music.

There was no one song that caused it, but it was there in that awful room that I finally understood what it was that made me uncomfortable listening to the “Figure Eight” song as a child.

It was the sense of longing , the trap of reality, and the idea that the only way to satisfy the longing and make the escape in childhood was through one’s own imagination. I couldn’t have articulated it as a boy, and I didn’t dare articulate it then. But I understood.

I know what you’re thinking– that I’m reading too much into a math-based cartoon. I’m sure I am, but I always do. I’ve been both blessed and cursed with an active imagination.

And the final take-away from my little epiphany in the back of Danny’s Seafood Palace? It certainly wasn’t the cheesecake. In fact, it didn’t occur until this week, when I decided to sit down and really think about Miss Dearie’s music and the effect it’s had on me, so hear it is:

Daydreaming is a great, if temporary, escape from an unsatisfactory life. It’s healthy exercise for one’s imagination, but spending too much time in a Walter Mitty-like state only makes one’s reality all the more unsatisfying.

The trick, I suppose, is turning the daydreams into reality.

It may have taken me several decades to figure that out, but I am grateful that I have. And, in a roundabout way, I have Blossom Dearie and the fine people behind Schoolhouse Rock for that. Who would have thought I’d find more to learn from them than multiplication, grammar, and civics?

So I’m saying thanks again, Blossom but, this time, I’m buying you a drink. Make that two. Minimum. 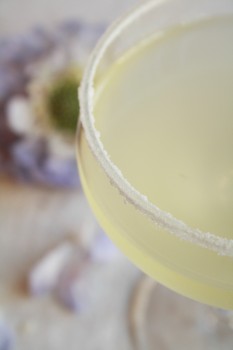 Cool as a cucumber; as floral and sweet as her name, but with a little bit of a bitter edge. The blossoms of Spring may have faded and dropped their petals but this, dear readers, is my blossom of Summer. I plan on having several, though not all at once. Ideally, I’ll find a refreshing breeze and someone to peel my grapes for me as I lounge and sip; happy to know that The Best Is Yet To Come.

Makes one Gin Blossom Dearie. If you need to make more– and I know you will– please refer to Schoolhouse Rock if your ability to multiply is shaky.

1. In a cocktail shaker, place  two slices of cucumber. Muddle the hell out of it. Next, add ice cubes, simple syrup, St. Germain, gin, bitters, and lime. Stir well, but gently, my dear, gently.

2. Wet the rim of your cocktail glass (I prefer a coupe as seen in the above photo) on a damp paper towel. Place the now-wet rim of the glass upside down onto a plate of superfine sugar, to achieve a thin, even coating.

3. Having made certain that your cocktail glass has been returned to its upright position, strain your Gin Blossom Dearie into its cold, gaping, glassy mouth.

Pour into your own gaping maw. Repeat as often as necessary.

*I am currently taking my Gin Blossom Dearies without the sugar rim. However, it does dress up an otherwise naked cocktail. I follow the mixology dogma of Mame Dennis, who feels that olives take up too much room in such a little glass. I extend that philosophy to nearly all of my cocktails, including this one, so no garnishes.

I write about food and am very fond of Edward Gorey. And gin.
View all posts by Michael Procopio →
This entry was posted in Celebrities, Liquids and tagged Blossom Dearie, cocktail, Gin Blossom Dearie, relationships, Schoolhouse Rock. Bookmark the permalink.

39 Responses to Gin Blossom Dearie or, What I Learned from Schoolhouse Rock.