Calamity in the Kitchen 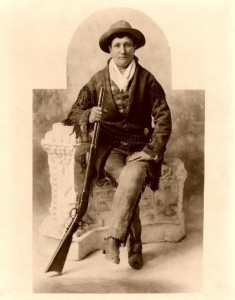 When I was a little boy, my grandmother would occasionally tell me stories of my rich, Wild West heritage. More correctly, she would make statements about it, since her stories weren’t very involved. They were more like out-of-nowhere utterances. Tall Tale Tourette’s is how I prefer to think of them.

She’d swoop upon our household once or twice a year from Arizona– where she moved “for her health”– to teach us card games, bake a couple of pies, plunder my stuffed animal collection “for the Indian children”, and pepper her speech with grand statements like “You know you’re related to Calamity Jane and Crazy Horse, don’t you?”

Being young and susceptible to sensationalism, I believed everything she told me. I would imagine Calamity Jane and Chief Crazy Horse sitting together outside of Mr. Horse’s teepee, sometimes sipping frosty mugs of  root beer, other times talking about how special I was, and what I would be and look like when I grew up.

Daydreaming about my famous ancestors made me feel less suburban and very special– as if I were in line to inherit the throne of The Great American West. Or something to that effect. It was my fantasy, after all, and I enjoyed every moment of it, however short-lived.

And it was short-lived.

On another visit, my grandmother lead me into the living room, sat me down on the good couch, pressed a coin into my little hand, and said with great, whispered solemnity, “Now Michael, I want you to take real good care of this. It’s two hundred years old. Worth a lot of money.” And then she wandered off into the kitchen.

I examined the coin. It was  a 1976 Bicentennial quarter. She saw the date 1776 embossed beneath George Washington’s beefy neck and discarded the rest of the information. It was at that moment that I understood that was was more likely to be descended from a crazy woman than a Crazy Horse. But she meant well, showered me with attention, and baked an excellent pie. 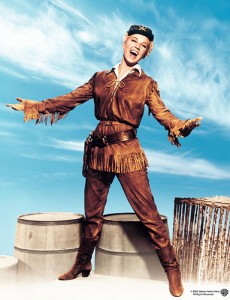 I did my best to overlook her eccentricities, but I never again took any of her stories as gospel. I just took them with a heavy pinch of salt, since I didn’t think a mere grain of it would be enough to counteract my grandmother’s imagination. I left Calamity Jane where I thought she best belonged– out of my family tree and onto the back lot of Warner Bros. Studios, played by Doris Day (which in itself was a total fabrication). Since Doris Day happened to by my aunt and uncle’s next door neighbor at the time (though I never saw her), I figured that was about as close to Miss Calamity as I would ever get. And that was close enough for me.

Thirty-three years later, however, a random encounter got me to rethink my relationship to this gun-toting wildcat.

At the end of an endless-seeming evening at work, I fell into conversation with a couple who were on their way to Montana for a little getaway. 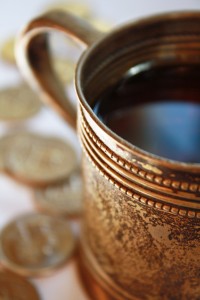 A silver baby cup from Livingston, Montana. Filled with whiskey, surrounded by quarters.

“Montana?” I asked. “I’ve never been there, but I’ve always meant to visit because that’s where my grandfather’s from.” When they asked what town, I told them the name of what I imagined to be a small town they’d never heard of. “Livingston,” I replied.

“Oh my god,” said the woman, “That’s where we’re going! We love Livingston.”

“Seriously?” I thought that my grandfather had fled the town because it was such a shit hole and I said as much to this couple sitting at my table, unable to understand why on earth they would choose such a place to holiday.

“Oh, it was a shit hole,” said the man. “The town was so poor, it couldn’t afford to tear down the old buildings and put up new ones, like all the other places in the area. But now it’s an artist colony and all the old buildings have been refurbished. It’s a really special place.”

To which the woman added, “And Calamity Jane lived there.”

“Well I’ll be a… ” I realized I was too far-removed from pioneer life to come up with an appropriate homey simile, so I stopped myself. Instead,  I thanked them for the information, wished them well, and called them a cab. I ran home and Googled “Livingston, Montana” and “Calamity Jane”. It turns out she did live in Livingston periodically. My great-grandfather ran the general store, which was the only game in town in terms of dry goods purchases at the time. They had to have met,  if only in passing.

So there was a grain of truth to my grandmother’s tall tale–however tiny.

I thought about that same great-grandfather who ran the general store. He was half Lakota, but could pass for white with his Irish freckles. Could a really be descended from the man who lead the raid which killed General Custer? Maybe, maybe not. There is no existing proof to back up the story, but I’ll tell you one thing:

I’ll bet you anything that I come from people who may have met him, too. And that’s good enough for me.

It’s unimportant that Calamity Jane did not (or that Crazy Horse may or may not have) contributed to my gene pool. What matters to me is that my grandmother’s stories didn’t just come from the movies. Or Outer Space. There was an ounce of truth to them, however far she may have stretched it to suit her own needs.

And that, I think, is how all tall tales evolve–around fact. An alcoholic, gun-toting, Wild Bill Hickock-pestering army scout walks into a general store looking for a sack of flour and–presto!–eighty years later, she’s family.

The truth is relative. Or not, as the case may be.

I’d like to wax philosophical about that idea but, right now, I’d rather make something to eat. Something that Calamity Jane (née Martha Jane Canary) might have made cooking breakfast at the inn she kept just outside of Livingston, Montana. Something like flapjacks. Or, in this case: 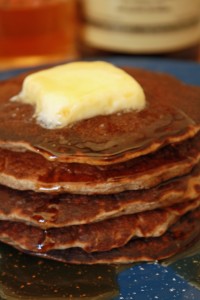 Martha Jane Cannary was no stranger to tall tales. She spent a good deal of her existence distancing herself from that which was painful and exaggerating the things of which she was most proud. She worked as laundress, a cook, and a prostitute. She scouted for the U.S. Army, she saved the lives of stagecoach passengers from Indian attacks, and she nursed smallpox victims backed to health.

And, of course, she was no stranger to nursing a bottle of whiskey.

She (falsely) claimed to have served under General George A. Custer (that would have been an uncomfortable connection, had I been truly related to both her and Chief Crazy Horse). Nor did she ever marry Wild Bill Hickock like she said she did. She is, however, buried next to him. Having said that Calamity Jane was of no use to him alive, Hickock’s friends thought it would be amusing to see if he might change his opinion of her in the Sweet Hereafter.

In honor of my non-relative, I’ve made something as straight-shooting, hardy, and boozy as a Wild West woman in leather pants: buckwheat pancakes liberally sprinkled with rye whiskey and doused with salty, sweet syrup. It’s sure to be a real crowd pleaser, provided the crowd is populated by cattle ranchers, army scouts, and prostitutes.

And that’s no lie. Or not much of one, at any rate.

Serves 2 to 3 Tall Tale Tellers, or 4 to 5 Little White Liars

1. Place an old, trusty griddle or cast iron skillet over your wood stove that has been fired with 4 3-pound pieces of hickory wood. Should you lack this most basic amenity, warm it over medium heat from your gas or electric burner. If you want to be extra sissified, hitch up your petticoats and break out your non-stick skillet. Whichever pan you use, it should be ready for the batter as soon as it is mixed.

2. Whisk together the dry ingredient–both flours, sugar, salt, baking soda–in a bowl large enough to double as a protective helmet, should an Indian attack occur. Pour the melted butter over the dry ingredients that you may or may not have purchased from a striking gentleman with freckles and prominent cheek bones from that delightful little general store in Livingston, Montana and start stirring. Beat the egg with a fork and stir it into half of the buttermilk.

3. Next add the buttermilk/egg mixture to the dry ingredients, then carefully add the rest of the buttermilk to get the right consistency for your batter. (Hint: it should not be so quick to pour as the brown fox who jumped over the lazy dog, but neither should it be a slow as molasses in January.)

DO NOT OVERMIX. A few lumps are just dandy, thank you.

4. Put a small amount (about half a teaspoon) of vegetable oil on the pan, using a paper towel to spread the oil into an even coating. Ladle 1/4 cup of batter into your pan, reduce heat to medium-low, and let the pancake cook for 2-3 minutes. When air bubbles start to rise to the surface at the center of your pancake, flip it. Cook for 1-2 minutes on the other side, or until nicely browned like a cowboy’s neck. Only not as leathery.

5. Keep your flap janes warm on a rack in the oven set to very low as you are making them. Spread more oil as needed in the pan as you go. Cook until all the batter has been used or until you are so bored with the process that you decide to stop.

6. To serve, add two good pinches of salt to your maple syrup. Taste it. Is it salty-sweet? If not, add more salt, since that’s what we’re aiming for here. Set aside. To plate, stack 4 to 5 pancakes, sprinkling a small amount of whiskey as you go. You know, the thumb-over-the-bottle-mouth shaking method. Gentle-like. You don’t want your breakfast swimming in booze. Think: functional alcoholic. Eat with generous pats of butter and salty maple syrup.

37 Responses to Calamity in the Kitchen