Touchscreen Dining: Out of Touch? 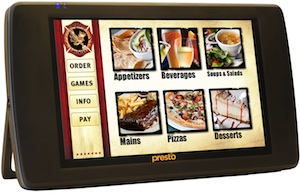 And it might very well be part of your dining future.

My feelings toward it are mixed, at best.

I am historically resistant to technological change. I quietly mourned the compact disc’s triumph over the long playing record; I didn’t see the necessity of a laptop computer when my desktop one worked perfectly fine; I was forcibly enrolled in Twitter by a friend; and the only reason I purchased a cell phone was because I would not be able to find my boyfriend in a crowd of 20,000 people 500 miles from home without one.

And yet I have come to embrace all of these technologies. In fact, I am physically embracing my computer as I type this on top of my lap. With my phone in my pocket. Playing downloaded music. The Twitter feed, however, is turned off. I have my limits.

I have the feeling that ordering from a touchscreen menu is one of those limits.

It isn’t as though I haven’t done it before. Anyone who has taken a Virgin Airlines flight has seen these screens. We pull up the food menu, place our index fingers to the screen to make our choices, then swipe our credit cards along the bottom of the tablet. Shortly thereafter, a flight attendant appears with what we have ordered.  It isn’t exactly magic, but it is certainly efficient.

However,  I do to miss being asked the question “Chicken or fish?” I may get my cold falafel sandwich quickly, but I never feel very good about it. There’s a subtle but important different between being handed a tray of food and being served it.

The people at E La Carte state that their menu tablet isn’t meant to replace those who serve. Rather, it is “meant to make the hospitality experience more convenient, social, and fun for the guests and more profitable for the restaurant operator.”

With the tablet, guests can “order, pay, play games, and give feedback straight from their seats.”

According to the product’s makers, there are three main benefits for the restaurant:

1. Boost average check size by up to 10% through up-selling, pictures, and impulse orders.

How on earth can a computer up-sell better than a human being? I think I need this explained to me.

When my friend Roy alerted me to this new piece of technology, my first reaction as both a career server at a fine dining establishment and someone resistant to new technology was to view the E La Carte tablet as vilely impersonal and a threat to my profession. Over the last 24 hours, however, I have calmed myself as I weigh what I imagine the cons– and the pros– this particular piece of equipment.

There are three important components a good restaurant must supply in order to provide its guests with a great dining experience (just pick up a Zagat guide and look at their rating criteria if you don’t believe me:

Though the menu tablet aims to provide photos of all the menu items, I am wondering if its creators have taken into account the fact that someone is going to have to style, photograph, photo edit, and upload a photo every time a new dish is created.

Substitutions? E La Carte states that guests can make alterations to their chosen menu item through this product. Simple enough when a guest might prefer mashed potatoes to french fries with their Porterhouse, but what about more complex– or outrageous– requests? Is it time then for a server to appear at the table with the bad news?

As for décor, I get irritated when the people I eat with leave their smart phones on the table, so I’m not going to want a 7 inch piece of electronics shining at me as I dine. A candle on the table and the smiles of my companions are all the glow I need, thank you very much.

And what about the human component of the dining experience that this gadget swears it is not intended to replace? As a server, one of the most important parts of my job is to form a personal connection with my guest. Argue all you like, but there is a certain amount of server/guest bonding that happens within the first few moments of interaction. When I say hello and ask someone if they’d like a drink or if they just want to settle in a moment and catch their breath, I’m not just offering to go fetch them something– I’m giving them the sense that they are going to be well taken care of.

The nuances of human vs. computer interaction are too many to get into in this post.

I understand that both restaurant owners and restaurant guests can benefit from such a menu in cases where one is looking merely to satisfy one’s hunger quickly and efficiently, like at a corporate chain restaurant such as Applebee’s (which is rumored to be adopting the tablets). Such venues already have standardized menu items that are photographically illustrated.

Touchscreen menus might also be a terrific boon for people who, for varying reasons, are unable to communicate well with spoken words. I’ve seen what an iPad can do for kids with autism. Could such interactive menus also help them gain confidence in ordering dinner? It’s an idea that intrigues me.

They may also be helpful to those unfamiliar with a particular cuisine and/or language (ever been to a Vietnamese restaurant and felt entirely helpless?). The idea of a computer with a built in glossary of terms and ingredients (or a translator) is an intriguing one.

And just think about how it could transform a wine list. 86’ed items could be immediately removed from the menu. Can’t remember what grapes are in that Grüner Veltliner (hint: it’s Grüner Veltliner, but you would be spared the humiliation of asking such a question of you could simply click over to a glossary or related link)? Of course, the draw back is that one could get so lost in so much information, that one might never be able to choose. Or put the damned menu down.

I think a tool such as the E La Carta has some excellent possibilities, but not in the way it’s being marketed. In addition to the ideas previously mentioned, I think that such a product used as a menu would cut down on the need for paper menus that must be thrown away or otherwise recycled every time they are either dirtied or in need of updating.

But then you should give your order to a human being and remove the electronic device from the dinner table.  Talk to him. Ask for her opinion. Just interact. Technology can be a wonderful thing, but not at the expense of interpersonal exchange. It has its time and its place.

The other day I was riding to work on the bus. When I had taken my seat,  I reflexively pulled out my iPhone to play a game of cribbage or stare at Facebook updates or do something– anything– to shut out my surroundings. Then something wonderful happened:

I was alarmed by how helpless I felt and my immediate thought was “Now what am I supposed to do?” And then I felt like a fool. I looked at my fellow passengers on the bus. Every person on it my age or younger was using their smart phone. None of them were smiling. It was just the old Chinese ladies at the front who were chatting and laughing away. I had no idea what they were saying, but they seemed to be doing perfectly fine without a touchscreen at arm’s length.

It struck me then that this is precisely what we’re all doing when we can’t manage to pull our eyes away from our gadgets– we are keeping people at arm’s length. And that personal computers aren’t, well, personable.

We spend so much of our time in front of computers– I know I do. Working as a waiter is a marvelous antidote to technology because every night I am forced to talk to people I’ve never met before. I ask them questions like “How are you?” and “Where are you from?” Granted, I get paid to do so, but it’s something I actually look forward to. It pulls me out of myself and, for a few hours every evening, my focus is on the welfare of other people.

And I look for the same thing when I am the one who is dining. I want to feel welcomed as a guest, not merely a customer. However much of a fantasy that might be at times, I want to believe it. I want to thank the person who placed that martini in front of me. I want to talk to a human being, not press buttons (unless they happen to the the emotional buttons of my dining partner). I want to feel as though I am being taken care of.

I just don’t happen to think that’s possible with a computer.

What are your thoughts? Like the idea? Hate it? If you’re one of those people who only comment because you can’t stand waiters, you will be cheerfully ignored. Or, if you’re extra offensive, deleted.

I write about food and am very fond of Edward Gorey. And gin.
View all posts by Michael Procopio →
This entry was posted in Rants and Stories and tagged autism, computers, dining, e la carte, Opinion, restaurants, touchscreen ordering, waiters. Bookmark the permalink.

29 Responses to Touchscreen Dining: Out of Touch?