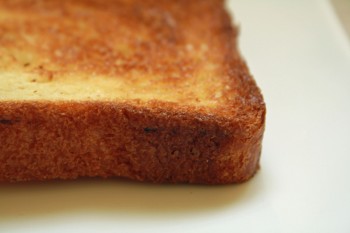 Some mornings, when I am awakened by the sound of my alarm clock or my grumbling stomach, I do what millions of others do–  I crawl out of bed, head for the kitchen, and make toast.

I was going to say that I make it  without thinking, but that would be untrue, since I do not own any appliance specifically designed to do the thinking for me in terms of heating and browning bread. I do without these appliances because they are a luxury I cannot afford in terms of counter space.

So I make my toast in the oven. There is a certain amount of thought that must go into the process, but nothing so mentally taxing it would send me back to bed.

I crank my oven up to broil and place two pieces of bread on the middle rack to let them dry out a bit as I wait for my tea kettle to boil. Just before the kettle has a chance to express itself audibly, I remove the bread slices from the oven and place them under the broiler to brown. It is a fairly straightforward process on most days. Unless I am either too tired or too distracted to be properly watchful, in which case not even dental records could prove that the charred remains at the bottom of my broiler ever bore the name bread. 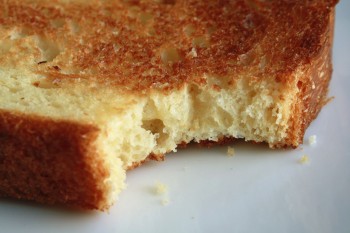 If my toasting mission has been a successful one, I will pour my tea and slather my freshly-carbonized breakfast with whatever is most handy. I eat it absentmindedly as I sit with my tea and read the news.

If ever a thought of mine was given to toast beyond its making, it has been merely to wonder what should be placed upon it: butter, cheese, peanut butter, bacon, tomatoes. I have always regarded my toast as a platform upon which to place other, more interesting things.

And, though I sometimes take my toast with jam, I almost always take it for granted. That is, until a friend of mine caused me to look at the stuff in a different light.

“You know, I think you should write about toast,” he said. His choice of venue was fitting, since these words were uttered near the bread station of our restaurant, which is conveniently located in front of a giant heat source– a large fireplace that was currently blazing and sending its heat out toward the stacks of fresh loaves. Before I could wonder aloud if toast could ever be made interesting, he added:

“It was the first food Gabrielle Giffords asked for and it’s sometimes the only thing I have an appetite for myself.” Since this statement came from a man who has been battling brain cancer with surgery, radiation, and chemotherapy for the past seven months, I took notice.

And now, for the first time in my life, I am giving proper thought to toast. 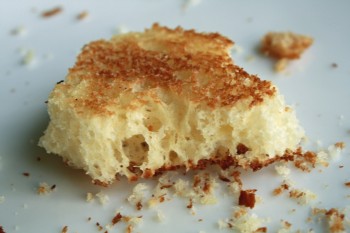 I’ve never had to fight off death, but I have often wondered if I would have the emotional and spiritual strength to beat back the brutal savaging done to me by a bullet or a mass of cancer cells or any other life-threatening agent. I know that I am fortunate enough to have the all support necessary should I need it– a good doctor, my family, my friends– but none of these externals would be of any real avail unless I had within me the powerful and indomitable urge to live. Battling death is not for the weak-willed.

I’m sure I have it within me, but it has never needed to come out and show itself, like it has for Giffords and my friend Doug. Both of them have stared death in the face. Both of them have made a slow-but-steady crawl back to life, though their bodies and appetites have been weakened. And both of them have expressed their recovering hunger by asking for toast.

It makes perfect sense that they should ask for such a thing. Toast is basic, comforting, and easily digestible– something which can be quickly made with ingredients readily at hand. It is bland, yet appealing to nearly everyone.  To those of us struggling to regain our health, toast presents itself to us as a sort of gustatory life raft we can hold onto until there is enough strength to pull ourselves out of the deep.

In another sense, the asking for toast is a symbolic act, however unintentional. Freshly-baked bread has a relatively short shelf life– it hardens and stales and is generally rendered unfit for eating unless it is ground up into crumbs and re-purposed or thrown to hungry birds. Yet if that same bread is sliced up and heated, it is given a new lease on life, but with a deeper, richer texture and flavor than it had before it was held to the fire.

Before it became toast. 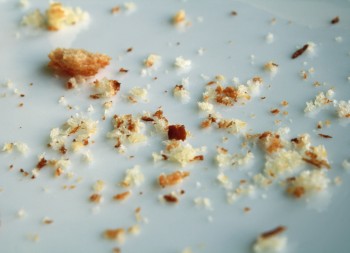 I went for a walk with Doug shortly after his brain surgery. As we strolled around the park, he told me that having a brain tumor was–oddly– one of the best things that ever happened to him because it caused him to concentrate on what was most important to him– spending time with his family.  He added that every day he is given on this earth is a gift not to be wasted.

It was a hard-earned lesson I knew I would do very well to heed. Thinking about toast, of all things, has reminded me of that.

So thank you for that reminder, Doug. You’ve been sliced up, held to the fire and come back to life. Every time I put bread in the oven in the morning, I will think of you and do my best not to squander the new day I’ve been given.

And I will certainly never take my toast for granted again.

Or you, for that matter.

I write about food and am very fond of Edward Gorey. And gin.
View all posts by Michael Procopio →
This entry was posted in Breakfast Time and tagged cancer, life, toast. Bookmark the permalink.

73 Responses to On Toast