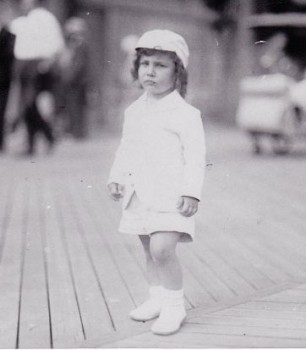 See this young fellow? It happens to be his eightieth birthday today.

And before you crack wise about his Shirley Temple ringlets, I can assure you this is a male child.

I know because he’s my father.

Just look at him! He doesn’t look a day over three. And at the present date, he doesn’t resemble anything approaching what eighty typically looks like. For some reason, he’s never looked his age.

How does he do it?

I can tell you one thing: it certainly didn’t come about from eating his vegetables. Dad’s a meat man, through and through. It makes perfect sense, really, because he was born above his grandfather’s butcher shop in South Philadelphia. He’s got meat in his blood. 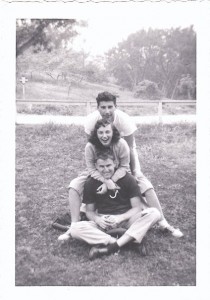 He’s also got some incredible genes, which delights me to no end because a) I’m his son and b) I look a hell of a lot like him.

When I was growing up, one of the few constants in my life was this: if dad was cooking dinner, we were going to be eating beef. A typical meal cooked by this man consisted of: grilled steaks served with steak sauce, steak hollandaise, and a lovely little steak salad served on the side.

If we dined out, we’d head to The Sizzler or The Black Angus.

I think you get the picture.

If I went to my father’s house and there was not a) Glenn Miller or Frank Sinatra on the stereo, b) a scotch in his hand, c) a deck of cards primed for gin rummy or cribbage, and d) a steak on the grill, I might have slid into a quiet panic, certain that he had been inexpertly replicated and begun a search for my real dad among my stepmother’s incredibly well-arranged closets.

There was almost as much tradition and ritual to a dinner made by my father as there was a holiday feast. My father was a grill man. I never thought of him as anything else, cooking-wise.

And then one day, he blew my mind.

It was a holiday dinner. My great aunts and grandmother, who traditionally did all the cooking, were either getting too old to whip up multi-course feasts, or they had passed on. My father stepped in to make the pasta dish which, in my opinion, had always been the main event. There were perhaps two or three times a year I got to eat my grandmother’s translucent ricotta-stuffed ravioli. I was felt deprived and saddened that I might never eat them again, ashamed that they were something I had always taken for granted.

“They’re letting dad make the ravioli?” I said to my brother. A man making pasta? In our family? The old broads never let the men hang around the kitchen, let alone cook it it.

“What’s he going to do, grill them?” I thought.

When I inquired after the health of the ravioli, I was informed by the gentleman who sired me that we weren’t having ravioli this time, but manicotti. The word “heretic” popped into my head, but I kept it to myself. 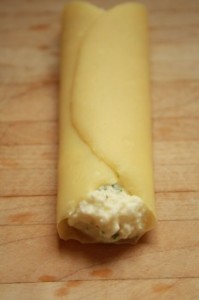 Manicotti. Of course he made manicotti. Tell a man to make a pasta dish and you end up with a cheese-filled phallic symbol. I think that may very well be the reason they aren’t referred to as ladycotti.

When he added that he made crepes instead of using dried manicotti tubes, I would have hit the floor if I hadn’t been concerned for the welfare of the drink I was holding and in great need of.

“Yeah, I thought it would be nicer to have something not quite so heavy,” he replied. Or something to that effect.

When in the history of the universe had this steak-and-potatoes man ever before uttered such a thing? I was about to start searching the closets for my real father, but I realized that such a search would be futile, since we were at some one else’s house.

As we sat down to dinner and I looked around the table at what was left of my family– most of the older generation had passed on by then– I felt ashamed of myself for my selfishness and shocked at how, as the token liberal at the table, I was the one so bloody resistant to change, so inwardly bent out of shape by a simple, practical streamlining of the menu. My father had volunteered to make the pasta dish in order to help, to make things easier on his elders. I felt foolish.

And then I tucked into a plateful of his manicotti. They may not have been my grandmother’s ravioli, but they were every bit as delicious– and delicate– as something she would have made. It was the same filling, the same sauce. The ingredients for the crepes were essentially the same ingredients as her pasta dough, but with different proportions, a different approach, a different shape.

The way I now think of it is very much how I think of familial genetics. My grandmother had certain DNA to work with. She mingled it with my grandfathers and out came my father– same ingredients, similar essence, but completely his own person. It made perfect sense that my father should maintain the essence of his mother’s pasta dish and yet make it something completely his own. To try to recreate her ravioli precisely would be a compliment to her, but it would be akin to seeing my father dress up in her clothes. An interesting idea, certainly, but the result would be utterly unconvincing– he’s got hairy legs.

No, he had the right idea. Manicotti made his way with her ingredients.

Since it’s his day today, I wanted to make what I now consider his signature dish– the one that most took me by surprise, the one that isn’t steak (and do not get me wrong– I love it when he cooks steak).

And, of course, when I make my father’s manicotti, it comes out not exactly as his, which is how it should be. Again, we’ve got the same ingredients to work with, but different outcome. I may look a hell of a lot like him, we both love Sinatra and Miller, we drink scotch together, we both play a mean game of cards, but we are very distinct people.

I wouldn’t have it any other way.

So Happy Boit-day, Pop. I hope it’s a great one. 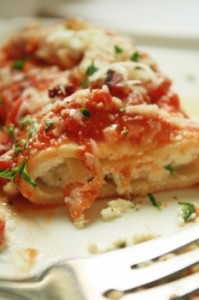 First off, I would just like to announce to the world that I find it an incredible challenge to make delicate, baked manicotti look attractive. I don’t (much) care, either, because they are delicious.

I should also like to state that getting the recipe without my father’s knowledge proved no small task since he and my stepmother share the same email address and always seem to be together whenever I telephone. My stepmother hurriedly jotted down the recipe and wisely told me to destroy all evidence of it.

Use whatever you like to sauce the manicotti, since you’ve more than likely got your own preferred one. I used my pasta alla gin sauce. You could probably pour Elmer’s glue over them and they’d still be delightful.

1 1/2 pound of ricotta cheese
2 whole eggs
2 to 3 tablespoons of finely chopped parsley (it’s entirely up to you)
1 cup of freshly grated pecorino romano cheese. Use more or less, I just happen to like all things cheesy, if you hadn’t gathered that by now.
A pinch or two of freshly grated nutmeg (This is not part of my father’s recipe, it is just something I find wholly enjoyable)

1. Place ricotta in a fine mesh sieve or cheese cloth to remove some of the excess water, then put into a medium sized work bowl, add the rest of the filling ingredients and stir well until everything is incorporated nicely and there are no streaks of egg yolk. You’ll know when it’s ready. Set aside.

2. To make the crepe batter, whisk eggs until they are well combined, add water and whisk until further combined, then add flour and salt until everything is even more combined and there are no lumps. The batter should be loose and pourable.

3. To form the crepes, pour 2 ounces of batter into a small nonstick pan, rolling the batter over the bottom surface to coat it thinly and evenly, and place over medium heat. Let the crepe cook until the edges just barely lift themselves from the pan (about 1 minute), then flip it just as you would a pancake, since that is essentially what you are dealing with. Cook for another minute on this flip side and remove crepe to an awaiting plate. I find it best to let the pan cool a bit before proceeding on to the next one. Continue this process until you have run out of batter. 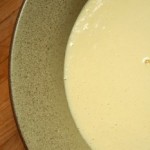 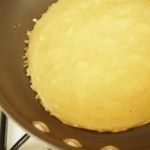 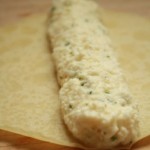 4. Prepare your baking dish by covering the bottom of said dish with sauce. To fill the manicotti, pipe filling into the center of the crepes, then roll gently as if making, say,  taquitos. Gingerly place your manicotti seam side down into the baking dish as you make them. And do position them as close together as possible. When your dish is full, cover the manicotti with more sauce, sprinkle on scads of grated cheese, then pop into the oven at 350º for 25 to 30 minutes, or until the dish is bubbling and the cheese on top is melted. If the dish is bubbling but the cheese is not melted to your liking, pop it under the broiler until you are well pleased with the results. Remove from oven, let stand a few minutes to cool slightly, then serve up to your guests or, in this particular case, virtually to your father, since you can’t physically see him on his 80th birthday.

I write about food and am very fond of Edward Gorey. And gin.
View all posts by Michael Procopio →
This entry was posted in Holidays, Savories and tagged birthdays, manicotti, manicotti crepes. Bookmark the permalink.