Posted on February 4, 2011 by Michael Procopio 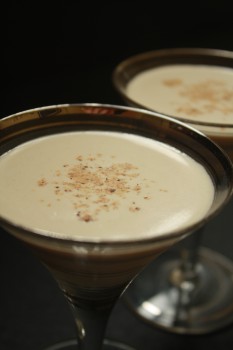 I was thirteen years old when Anthony Blanche introduced me to a most sinister drink– the Brandy Alexander.

Mr. Blanche– or Antoine, as he sometimes styled himself–rolled his “r”‘s and wore varnish on his toenails. He  drank champagne in the middle of the afternoon and he stammered at all the right moments.

He was the definition of louche before I ever knew the meaning of the word.

I was both fascinated and repulsed by him, which is precisely how I feel about the Brandy Alexander, since the two are inextricably linked in my brain.

There is a moment early on in Brideshead Revisited (1981 BBC version, not that terrible film that came and went a few years back*) in which Antoine has “chivied out” Charles Ryder “like an old st-toat” and taken him out for cocktails and dinner. The scene opens with four cocktails being placed in front of Blanche. He utters the following words to Ryder:

“Two for you and… two for me. Yum, yum. I expect you prefer sherry but, my dear Charles, you’re not going to have sherry. You’re going to try this d-delicious concoction instead.”

Charles takes a sip from one of the glasses and grimaces. Antoine then proceeds to drink all four of them before going off to dinner where he sets out to bash their mutual friend Sebastian Flyte and warn Charles of the dangers of involving himself with him and the entire Flyte family.

His delivery was smooth and subtle, but delivered a powerful punch. Not unlike those four cocktails he downed in the bar.

And, believe me, they do pack a punch. Have you ever pretended you were Anthony Blanche and ordered four Brandy Alexanders? I have. I did it just so I could re-enact the scene. And I needed props. When one downs four consecutive Brandy Alexanders at one go, one doesn’t feel the kick of the booze until it’s much too late to do anything about it.

I won’t go into detail, but I can assure you it was the last time I ever attempted to keep up with Mr. Blanche.

It’s hard to imagine that such a girlie drink could be so dangerous. Or so sinister. It’s cream and chocolate, for God’s sake. But the more thought I give to the subject, the more I’m convinced that the drinking of Brandy Alexanders leads to very bad things.

The other week, I shared these thoughts with a friend. He looked at me a moment and said, “Isn’t the Brandy Alexander the drink that turned Lee Remick into a raging alcoholic in The Days of Wine and Roses?” 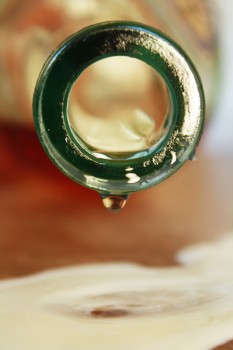 On her first date with future husband/momentarily functioning rum pot Jack Lemmon, she explains that she doesn’t drink because she doesn’t like the taste of alcohol. She prefers chocolate instead. His solution? He buys her a Brandy Alexander. She loves it, she drinks more. And then a lot more. Lemmon eventually gets sober, she does not.

Another example came up in conversation with my friend Nicky. He told me he had just finished working on a production of John Patrick Shanley’s Savage in Limbo in which a character says of the Brandy Alexander, “My mother drank four of those one Christmas, and she died. She drank four of ’em and then she started breathin’ out. Ssss. And she never breathed in again.”

Evil, I tell you. And deadly.

Even Feist has added her two cents in a song appropriately entitled “Brandy Alexander”.

Brandy Alexanders. So smooth and creamy and chocolatey. So devious, so dangerous, so deadly. And so terribly delicious.

Is it any wonder Helen Hayes– a woman who shunned drinking– downed three of them before she realized there was alcohol in them?

They always get you into trouble. Miss Hayes never stated clearly whether or not they got her into trouble, but she is dead.

There is talk in certain circles that this particular alcoholic beverage was created in honor of the marriage between Mary, Princess Royal and Viscount Lascalles in 1922. This is certainly possible, considering the fact that Mary may have been in dire need of alcohol to cope with a loveless match, but naming cocktails after members of the royal family has always been frowned upon by them. Just think of the Fergie Fizz** to properly appreciate their concern.

I, however, prefer the idea that it was named for Alexander Woolcott, a man very fond of said cocktail and– as the inspiration for Sheridan Whiteside in The Man Who Came To Dinner— would have driven anyone within his general vicinity to drink.

Makes one drink. For multiple Brandy Alexanders (or Brandies Alexander, if you prefer), please study this chart if you need a little help.

Place ice into the tumbler of a cocktail shaker. Pour all three liquids over the ice, close the lid tightly, and shake vigorously.

If you are a true alcoholic and are prone to fits of the shakes, get someone to place the shaker into your trembling hands and let those delirium tremens to the work for you. It’s that easy.

Pour your now-frothy drink into an awaiting martini glass, garnish with a pinch of nutmeg, and prepare to meet your own doom.

Or at least get into a little trouble.

*My boyfriend at the time took me too see this film on my birthday because he knew I’d love tearing it to pieces. How well that fellow understood me.

**Be grateful that I could not find the recipe. As I remember it, it was made with beer, some Sprite®-like soda, and topped off with champagne. I drank one when I was in London around the time of her wedding to Andrew, Duke of York. The only thing I can say in my own defense is that I was 16 years old and didn’t know any better.

I write about food and am very fond of Edward Gorey. And gin.
View all posts by Michael Procopio →
This entry was posted in Liquids, Stage, Film, and Television and tagged brandy alexander, brideshead revisited, cocktail, danger, days of wine and roses, evil, Feist, Helen Hayes, louche. Bookmark the permalink.

34 Responses to Two For You…