Posted on February 17, 2011 by Michael Procopio 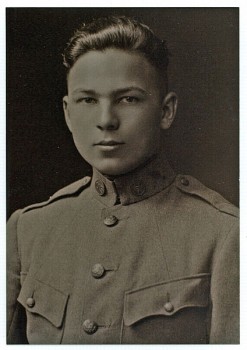 Do you know who this man is? Well, I didn’t either until a couple of weeks ago. His name is Frank Buckles. He celebrated his 110th birthday on February 1st.

That makes him a super-centenarian, which I happen to think is, well, just, umm… dandy.

He also happens to be the last surviving American veteran of World War I.

So today I wanted to celebrate his birthday in my own way by baking him a very special dessert:

I’m calling it The Frank Buckle, naturally. And I am not putting any candles on it because a) there simply isn’t enough room for 110 candles, b) the cost of said candles would be prohibitive, and c) I could not in good conscience burden this man with blowing them out because it would more than likely take him until his 111th birthday to do so.

I had thought of baking bread in the shape of a pudgy boy, but it seemed rather inappropriate, given the fact that Mr. Buckles was still doing 50 sit ups a day well into his 109th year. And besides, I didn’t want people to confuse him with that other doughboy.

Though Frank Buckles didn’t see any action during The First World War, he did manage to be captured by the Japanese while working in the Philippines during the Second. He spent two and a half years in a prison camp where he was starved to a weight below 100 pounds and developed beriberi, yet still managed to lead his fellow prisoners in exercises. 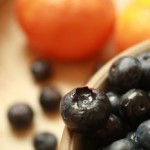 It’s no small wonder this man was still driving a tractor on his West Virginia farm at the age of 102.

And yet, people are making plans for his funeral, which I happen to think is an unfortunate thing to be doing for such an historically robust man: he was recently awarded the privilege of being buried below ground at Arlington National Cemetery. The French have said they would send honor guards and a military official, the British will send their air vice-marshal and (if he isn’t too busy) their ambassador.

I imagine everyone will cry a little and tap their toes to some military marches or yet-to-be-determined Irving Berlin tunes. And then they might have a little cake or something and fold flags.

It’s all rather morbid. The man is still among the living, for god’s sake, so I prefer to celebrate that. When he goes, there will be no one left to ask about the war that toppled old empires and kick-started new ones. Perhaps instead of prematurely eulogizing Mr. Buckles, we should be asking him for any advice we can get out of him while he is still doing his sit ups among us.

So Happy Birthday, Mr. Buckles. I know my wish is two weeks late, but I didn’t think you’d mind, since 14 days must seem like nothing to someone who’s been around for approximately 40,191.

Here’s to many more. 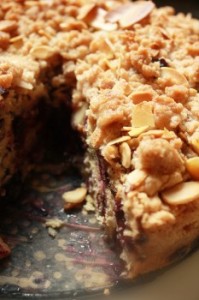 Just as The War To End All Wars didn’t live up to its nickname, this is not the Dessert To End All Desserts, but it is sturdy and homey, just like its namesake. Oh, and it’s tasty, too. I would have added that earlier, but I’ve never gotten close enough to Frank Buckles to sample him. 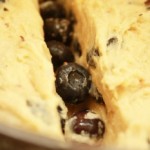 Since there is nothing especially World War One-y about a buckle, I did the only thing that came to mind to make it so– I dug trenches in the batter and crowded blueberries into them. I had considered making the area between the trenches a sort of No Man’s Land, but it would have necessarily been devoid of berries except for those left blown to pieces on the surface, which just didn’t seem terribly inviting, if you ask me.

I should also note that buckles are called just that because, when the thing is baked, the surface of the dessert dips and cracks, leaving the crumb topping buckled in appearance. This particular cake did not buckle.

Then again, neither did Frank.

Serves 8 to 12, depending upon how one slices it.

1. Preheat oven to 375°F. Grease an 8-inch spring form pan with butter or whatever your fat of choice happens to be. Line the bottom with parchment paper that has been cut to size, then butter that, too. Dust the inside of greased-up pan with flour, tapping out the excess, then set aside the pan.

2. Place all topping ingredients except the almonds into a medium-sized bowl. Work the butter into the sugar and flour with your fingertips until the desired crumb-like texture has been achieved. Mix in almonds taking care not to break them up too terribly. Place this bowl of topping into your freezer until ready. I just find that crumbly toppings stay more crumbly when cold. It could be a totally wasted step, but please leave me to my illusions– I have so few left to me.

2. Sift together 2 cups of flour, salt, and baking powder and set aside. Cream the butter, sugar, and orange zest using the paddle attachment of an electric stand mixer until light and fluffy, then beat in the egg and almond extract until the mixture is even lighter and fluffier than before.

4. Toss blueberries with two tablespoons of flour (which will help them to scatter more or less evenly through out the batter) and fold all but a scant handful into the batter. Pour batter into awaiting spring form pan. “Pour” is a rather inaccurate word, since the batter feels more like a dough at this point. Let’s make it “place” or “situate”. Gently press the dough/batter into the pan into an even layer.

5. With a clean index finger, dig two trenches into the dough and place your berries like good little Tommies, Poilus, and Doughboys on one side and nasty, Belgian-crushing Jerries on the other. Note how quiet-seeming it is on the Western Front and then promptly bury all of your unfortunate berries with a tank-like gesture, plowing them under to their doom.

6. After giving your berries a proper moment of silence, pull the crumble topping out of the freezer and generously cover your buckle with it. Pop into the middle of your now-hot oven and bake for one hour or until the cake has firmly set. If you are worried about your top getting too brown, just cover it with some tin foil when you feel it has reached its proper shade of dark.

7. Let cool, remove from pan, and serve with sweetened whipped cream, honeyed sour cream, or whatever it is you plan to serve it with.

But, given that this dessert has been created in honor of our oldest living veteran, I hope you serve it proudly.

*This recipe is a heavily bastardized version of Simply Recipes’s, umm, recipe.

I write about food and am very fond of Edward Gorey. And gin.
View all posts by Michael Procopio →
This entry was posted in Breakfast Time, Sweets and the Like and tagged beriberi, blueberry buckle, coffee cake, doughboy, Frank Buckles, veterans, World War I. Bookmark the permalink.