Posted on September 14, 2010 by Michael Procopio

Today, thanks to the magic of Twitter, I learned that the Liberace Museum in Las Vegas, Nevada is closing.

All those years of visiting Sin City and I never once bothered to go to that damned museum. I always said to myself, “Next time. I’ll go there next time.”

And now there won’t be a next time.

Thirty years of rhinestones and sequined pianos snuffed out like a candle from one of those glorious candelabras.

Or is it candelabrae? I really couldn’t tell you, but I bet Liberace could.

He could do anything. Especially cook.

While it’s true that some big, big stars were avid cooks (think: Dom DeLuise) and offered up a recipe or two for a charity cookbook or an appearance on Dinah! or the 700 Club, other celebrities seem to have been conned into submitting recipes for publication by their publicists. Some of them are painfully (and by painfully, I mean entertainingly) self-delusional and chock full of irony.

Think: Paul Lynde and his Diet Waffles or even Tori Amos and her Glazed Turnips (the recipe given to her by her personal chef). Very few celebrities, by comparison, have managed to produce their own cookbooks (DeLuise aside).

And yet, there exists a cookbook entitled: Liberace Cooks! The exclamation point is his, not mine.

This posthumous collection of recipes was compiled the people who love him the most– those woman who unsmilingly devote themselves to his memory and seem to think that the faithful, obsessive polishing of rhinestones might actually bring about his resurrection. This cookbook was published in 2003 by the Liberace Foundation for the Performing and Creative Arts, an organization that has managed to award more than $5,000,000 in scholarship money to deserving students.

Buy a copy for yourself. It’s a must for any serious collector of cookbooks. And non-serious, too.

The 59-page book(let) is filled with a wide array of recipes from the ethnic Polish Radish Salad to the what-was-fancy-in-the-60’s-and-70’s dishes Boeuf à la Mode en Gelée and Coq au Vin.

When I received this book as a gift from my friends Gary and Bill, I merely accepted it as a thoughtful, funny gag gift. And it is amusing (you should see the photos of him with starlets mooning and drooling over his…cooking), but it also manages to maintain the surprising quality of feeling like a real person’s cookbook, not merely one from a celebrity showing off in the kitchen. Liberace was in the kitchen a lot. These are dishes he actually made– many of the recipes were passed down to him from his mother.

And we all know how much he loved his mother.

In honor of Liberace, his museum, and his dear mother, here’s a recipe from his cookbook that was published with what I can only hope to God was a wink and a nod. 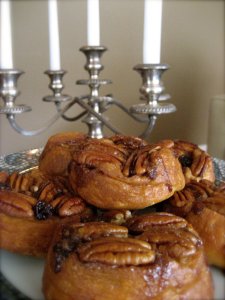 What I find so wonderful about this recipe is that it is- without any trace of self-mocking humor– his own. And it’s ridiculously easy to make, too. The only change I’ve made is in my choice of raisin, and that’s simply because I didn’t feel like hunting for little boxes of white raisins (a dried fruit more popular in the 1970’s that it is today). Just prior to baking, my friend Nicky assured me that red flame raisins seemed much more appropriate to use, given that the creator of this recipe was such a bright, shining star who burned out much too quickly.

I must say that I agree.

If the preparation reads like a never-ending paragraph, it is because that is exactly how it was written. I am as faithful to Liberace as I can be.

Soak the raisins in the rum over a low flame. Set aside. Preheat oven to 325 F. In a saucepan, melt butter and stir in the spices and the brown sugar until the mixture becomes a bubbling syrup. Unroll the crescent dough, keeping each package in one flat place. Drizzle one quarter of the syrup over each individual piece of dough, reserving the last quarter for later. Sprinkle one third of the raisins and spread one third of the chopped pecans [Pecans? Liberace seems to have missed something fairly important in his ingredients list. Please excuse me while I go back to the store to buy some nuts.] on each of the three sheets of dough. Roll up each section of dough, jelly-roll style and cut into 1-inch pieces. Grease two eight-muffin pans or three six-muffin pans with butter. Put a scant teaspoon of the reserved syrup and a few whole pecans in the bottom of each muffin mold. Cover with the individual jelly-roll pieces, cut side up. Bake in preheated oven for the time recommended on the Pillsbury packages. While pans are still hot, invert them on a sheet of heavy aluminum foil allowing the buns to be released. Replace any of the syrup and pecans that cling to the molds on the individual buns. You should serve the buns while they are still warm and have that fresh-from-the-oven taste.

Apart from the omission of pecans from the ingredients list, I might substitute water for butter in the making of the syrup. It would make for a much smoother, lighter, stickier syrup. I’m not even embarrassed to have used Pillsbury crescent dough– it’s been far too long since I’ve experienced the joy of whacking that cardboard tube against the kitchen counter.

This entry was posted in Books I Love and Loathe., Breakfast Time, Celebrities, Sweets and the Like and tagged celebrity cooking, gay cooking, liberace, liberace cookbook, sticky buns. Bookmark the permalink.