My Life According To Oscar or, How To Make A Donald Crisp 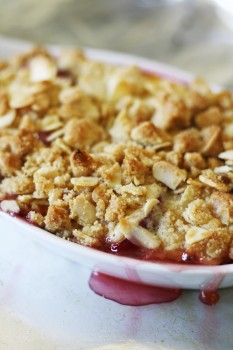 I have this thing that I do. Some people find it annoying; others, fascinating.

People tell me when they were born, I tell them who won Oscars that year.

It’s one of my little quirks. And a rather lame party trick, if you ask me.

When I tell someone he’s A Man For All Seasons, I mean that he was born in 1966. And then that same person will look at me and ask, “Why the hell do you even know that?”

When I was 11 years old, I came down with a very nasty strep infection, which is not typically good subject matter for a food blog, but stay with me here. My tonsils were so swollen that, at one point, I could feel them touch each other at the back of my throat. I couldn’t eat or drink without discomfort, nor could I sleep because, every time I swallowed heavily, I would wake up in pain.

Those were good times. No cable television, no computer games to distract me, no talking, no singing of show tunes. Whatever was a pre-Information Age boy to do?

Fortunately, my father came to the rescue. He stopped by the house to see how I was doing and gave me the book that was to set me on a remarkable path of trivia absorption from which I have never strayed: 50 Years of the Oscar: The Official History of the Academy Awards by Robert Osborne.

To both entertain myself and to keep my mind off the pain, I decided to play a little memory game. I wound up memorizing every Best Picture, Actor, Actress, Supporting Actor, Supporting Actress, Director, and Song listed in that damned book. Surprisingly, most of that information has never left this little head of mine.

And so… at some point I just started telling people who won Oscars the year they were born. I think you get the (best) picture. It’s sort of like my own version of the zodiac. I’m a 1969 baby, so I see myself as a Midnight Cowboy with Maggie Smith rising. A little bit Goldie Hawn, a little bit Gig Young, but not a trace of John Wayne in me.

Of course, it got a bit boring being stuck with the same film year in, year out, so I started to look at my life in terms of films that won the Oscar for the year that correlated to my age. For example, I deemed my 39th year on this planet as my Gone With The Wind (1939) year because it was so full of melodrama and seemed to go on forever.

As for 40, though I could not afford the upkeep of a deranged housekeeper, I felt as if much of the year, in a sense, was spent coming into my own and out from under shadows of others, not unlike Rebecca‘s (1940) unnamed heroine.

On Wednesday, I turned 41. If I am to continue living my life according to Oscar, I must look to the film How Green Was My Valley. I’m not certain what that’s supposed to mean, but I fully expect to get very nostalgic and, perhaps, date a Welshman. I hope it doesn’t mean I’m going to have a love affair with a minister. Or die in a coal mine.

I am cautiously optimistic. And, for some reason, it has inspired me to bake something:

A Donald Crisp. No, really, it did. 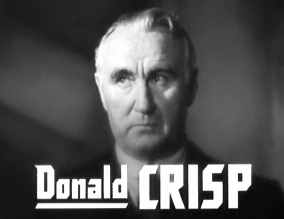 And why a Donald Crisp? Why not bake a Donald Crisp? He won the award for Best Supporting Actor in 1941 as a stern-but-loving father (always Oscar gold) in, conveniently enough, How Green Was My Valley. The decision to bake him into a dessert follows my own, particular path of logic. I could not have made anything else under the circumstances.

I considered other Oscar winners for the year, but they just didn’t inspire cooking. Yes, I could have made a Sergeant Yorkshire pudding, but that seemed ridiculous. And under no circumstances was I about to make anything with the name Suspicion in it. In terms of baking, I firmly believe that anything Joan Fontaine-inspired is to be avoided, since the result will either be weepy or worse, too bitter to eat.

Truth be told, I’m a little disappointed that Barbara Stanwyck didn’t win for Balls of Fire. I could have made something really, really interesting.

All this thought about how I might life my life according to the Oscars has really gotten me thinking about my future. For example, I can’t wait until I turn 42 so that I might start suffering nobly like Mrs. Miniver. Of course, she had to deal with severe wartime rationing, so I’d better start saving my flour and eggs for next year’s birthday recipe. 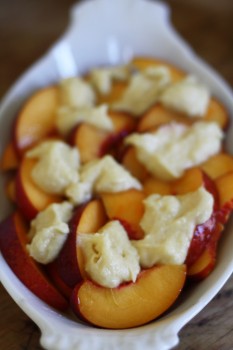 There is absolutely nothing about this crisp that screams the name Donald. Nor is there anything particularly Welsh about it either, but I wasn’t about to put leeks into my dessert. It is what it is, which is good. And easy. Worthy of an Oscar, in my book. Or, at least a nomination.

You decide. Please submit your votes to Price, Waterhouse & Coopers. Thank you.

4 firm (but not rock hard) nectarines, pitted and sliced

1 tablespoon of sugar (taste the fruit, if it is sweet, add less. If not sweet enough, add more, got it? Good.)

1 tablespoon of Maraschino liqueur or kirschwasser.

2. Melt butter for the topping and let cool. Add all other topping ingredients and combine well. Place topping in the freezer as you prepare the rest of the ingredients, which will make it nice and clumpy, which is to be desired.

3. To make the frangipane, combine all ingredients until smooth. Set aside.

4. Slice your nectarines and toss in a bowl with sugar, orange zest, and maraschino liqueur. Look at bottle of liqueur. Notice that it roughly the same size as an Oscar. Clutch it to your bosom and practice your acceptance speech when no one is looking. 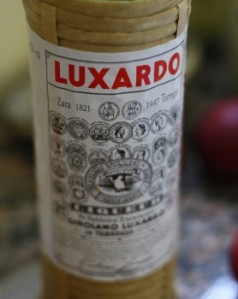 5. Arrange fruit in a shallow layer along the bottom of a small, oven-proof baking dish. Dot the fruit with spoonsful of frangipane, then top the whole thing with crisp topping, which you have sensibly removed from the freezer. There will be much left over topping, which you will want to have on hand when people command you to make more of this recipe.

6. Place your crisp-filled baking dish on a foil-lined baking sheet because the juices from the fruit will bubble and spill over the edges of your dish. If they don’t then you don’t have a proper crisp in my book. Bake for about 25 minutes, or until fruit is a-bubble and the topping is browned.

7. Serve warm on its own or with vanilla ice cream. Or eat it cold from the refrigerator for breakfast. It’s even better-tasting the next day, though the topping will more than likely not be crisp, which might cause one distress, given the fact that the dish is called a “crisp.” Feel free to rename it something else if this is a major concern.

8. Accept applause, but please keep your speech to less than one minute, otherwise the orchestra will try to drown you out and the teenage daughter of a celebrity will walk into your kitchen in a rented evening gown and usher you offstage.

I write about food and am very fond of Edward Gorey. And gin.
View all posts by Michael Procopio →
This entry was posted in Celebrities, Stage, Film, and Television, Sweets and the Like and tagged academy awards, dessert, Donald Crisp, frangipane, How Green Was My Valley, Joan Fontaine, nectarine crisp, oscars. Bookmark the permalink.

17 Responses to My Life According To Oscar or, How To Make A Donald Crisp