I never thought I had an issue with cauliflower. In fact, I’ve always enjoyed it, whether puréed into a soup, roasted to a nutty brown, or dragged through a bit of ranch dressing that always seems to accompany store-bought party crudité platters. Any time it is put in front of me, there is a good chance I’ll eat it.

And yet I’ve never in my life cooked it. At least, not that I can remember.

I’d see it in the market, buy a head of the stuff and bring it home where it would just rot in my refrigerator, not so much forgotten as avoided.

I’ve gotten as far as placing one on my cutting board, but when I took out my 10″ chef’s knife, I paused, changed my mind at the last moment, and put the thing back into cold storage. For some reason, I just didn’t want to cut up a head of cauliflower. I never gave it much thought until a few months ago.

When I remembered Ben.

On the very last day of elementary school, my friend Shannon and I began our final walk home with a boy named Benjamin Brenneman in tow. I can no longer remember what we all talked about or how the conversation turned ugly. All I can remember is the smell of the cut, dried grass and clover and wanting Benjamin to just go away.

Shannon and I, who were no strangers to teasing and bullying, found a release for our own frustrations upon this poor little blond boy with big eyes and the misfortune of having ears that stuck out. Whether he provoked our anger or not, I can’t remember, but one thing seems clear to us– or at least to me– he was someone I could pick on, much in the way that other boys had always picked on me.

He was easy prey.

“Cauliflower ears!” Shannon joined in. It seemed all we could do was scream those words at him as if that sort of crazed chant would somehow make it true.

I wasn’t pleased with myself. I don’t even know what I was thinking. Perhaps it was the illogical thought that, if I could give out the sort of abuse I was so used to getting, I’d feel better. But, of course, I only felt worse. I don’t think I had ever made another boy cry before on purpose except in self-defense. I knew that I owed him an apology. My hope was that, since we were about to enter the more grown-up world of middle school, we’d all be given a free pass, a clean slate to start out fresh. I’d make it up to Ben when we started the seventh grade.

I never got the chance.

Over the summer, on August 25th, 1981, to be exact, Ben was making his rounds as a paperboy, collecting subscription money on his route when he entered the apartment of a man named Robert Jackson Thompson by whom he was hogtied, sodomized, and strangled. Thompson, it was later learned, had been paroled from prison four months earlier where he had been serving time for molesting a 14 year-old boy at knifepoint.

Ben’s murder was all anyone could talk about for the first couple of days at middle school. Nearly every conversation began with, “Did you hear about Ben?” The stories of his murder became distorted and even more horrifying. After two days, a cruel rumor spread that he had been dismembered; that parts of his body were found all over the county and that the police were racing about trying to find them as though Ben was the sole source some sort of macabre treasure hunt.

And then, suddenly, everyone stopped talking about him. By end of the week, it seemed as if Benjamin Brenneman had never existed at all. I did my best to forget him, too. With adolescent logic, I had blamed myself for contributing in some way to his death in much the same way that a child of divorced parents might blame himself for their separation. I couldn’t bear the fact that I had caused him pain, that I had so easily victimized him. I imagined him trapped inside Thompson’s apartment looking at his murderer with the same big eyes that I had so recently made cry.

It was too much to bear, so I stuffed it away somewhere and did my best to forget all about it, just like everybody else.

Survival skills are fascinating things. To think that something as traumatic as a child murder could be ever be forgotten. More interesting to me is that I was only reminded of it whenever I tried to take a knife to a simple head of cauliflower. Even then, the feeling was only a vague sort of dread. No vivid memory of Benjamin, just an avoidance. I never cried or felt any sort of terror.

When I finally made the connection, I was stunned. I hadn’t thought about that poor boy in decades. And when I did, I felt ashamed that the only memories I now retain of him are of the last day I saw him. I can’t remember playing with him at recess, the telling of jokes, or anything good– it was all there, I just can’t remember any of it.

I recently asked Shannon if she remembered that last day of school. She had only a hazy recollection and recalled nothing about the name we called him. That is, until a few minutes later, when things started to come back to her, albeit vaguely. I wanted to talk more about it with her, but we were distracted by her children. I took a look at her eldest child– my 11 year-old goddaughter– sitting there drawing Manga characters, wondering aloud when we were going to (finally) watch Funny Girl together, and complaining that her little sister was bothering her.

I couldn’t help but think that she was the same age Ben was the last time I saw him. I didn’t share my thoughts with her mother. I decided to just let the whole thing go. 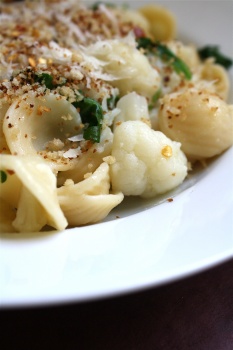 When I told my friend Karen my plans of writing this essay about Ben, she took a sip of the Negroni I’d made her, relaxed her face a little, and said, “You know what you need to make, don’t you?” It was obvious to her, but not to me– Orecchiette with cauliflower. Cauliflower and little ears.

It isn’t meant so much as a pun as it is a kind of memento mori— a dish that I will add to my repertoire so that I might think of Ben from time to time, to remind myself just how short our stay in this world can be, and to make the most of what time I’m lucky enough to have left.

The following is a (very) freely adapted version of Donna Scala’s (Bistro Don Giovanni in Napa, California). I’ve added breadcrumbs, changed the cheese and too many other things to accurately call it hers, but it is from her recipe that I have based mine.

1. Steam cauliflower florets over boiling, salted water until they are tender– easily pierced with a fork (about 8 to 9 minutes). Set aside.

2. Bring a large pot of salted water (the water should taste briny, as Ms. Scala says)  to a rolling boil. Add pasta and cook until al dente (8 to 10 minutes), stirring occasionally to prevent the ears from sticking together. Reserve about 1/4 cup of the water, drain, and keep warm.

3. Heat olive oil in a large skillet. Add garlic and stir until lightly cooked. Add cauliflower and a pinch or two of salt. With the back of a heavy spoon or whatever cooking utensil you are using, lightly mash the florets.

4. Pour the reserved pasta water into skillet and stir in. Add chili flakes and pasta to the pan. Add in arugula and a small fistful of cheese. Toss some more.

5. Transfer to a serving bowl, sprinkle with bread crumbs and the rest of the grated cheese. Serve immediately.

I write about food and am very fond of Edward Gorey. And gin.
View all posts by Michael Procopio →
This entry was posted in Rants and Stories, Savories and tagged caulflower, child murder, death, murder, orecchiette, pasta, repressed memories. Bookmark the permalink.