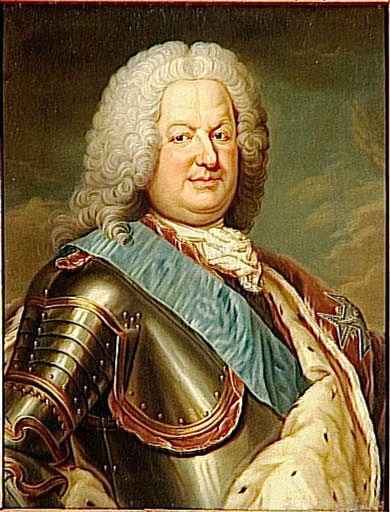 I have this thing about history books– especially ones about food history, military history, and the misdoings of European royalty. If its got a lot of useless trivia packed into it, I will read it, digest it, and annoy my friends with the opening line, “Hey did you know…?”

And if what I’m reading includes all of the above, I am one happy nerd.

Thanks to my recent reading, its finally happened. I’ve met him— my new historical crush, Stanislaw Leszczynski. He might not have been the handsomest fellow in the world, but he had it going on: he lost the crown of Poland, became the French Duke of Lorraine by marrying off his daughter Maria to Louis XV (after losing Poland a second time), and, most likely by virtue of is own good nature and a heavy dose of pity from Frederick III, was made a count of the Holy Roman Empire. It doesn’t matter much that, by the 18th Century, The H.R.E. was neither holy, nor Roman. It wasn’t even much of an Empire, but a cluster of bickering Central European states. Still, it was a nice title.

But it really isn’t his laundry list of honors that impresses me. I’d still like him if he were merely an viscount or baron or margrave. It’s his penchant for popularizing and ascribing names to food that I like. Really, really popular food. King Stanislaw, it seems, was quite a gastronome, as both his painting and  his multiple chins might indicate.

According to my latest read, The Food Chronology by James Trager, Stanislaw started a craze in Paris for pigs’ feet, tripe, and most importantly, onion soup soon after his daughter became queen of France. According to legend, he was so taken with an onion soup he was served at an inn on his way to Paris that he visited the kitchen in his dressing gown and demanded the chef to show him how to make it. Et voilà, everyone was eating Soupe à l’Oignon.

It is also culinary lore that Stanislaw would drench kugelhupf with rum from the French West Indies to create Baba au Rhum. Though it is more than likely he did not name the dish “Baba au rhum“, three points of truth indicate his possible involvement in some ways– kugelhupf was a well-established dish in the regions of Alsace and Lorraine by the time Stanislaw took up residence, he loved alcohol, and the word “baba” is derived from the Polish word for “good woman” or grandmother. Think “babka.”

And finally (unless you want to get into the quiche Lorraine, which I do not), he’s got the madeleine– that tea cake enshrined by the famously self-obsessed shut-in, Marcel Proust. Not everyone will agree that Stanislaw was the man who named it. What is known is that the madeleine originated in the town of Commercy, in Lorraine, where Stanislaw was in residence. Some say he named it after a maid who served them him. Others say they had long been baked by the local nuns of St. Mary Magdelen convent.

Oh, there are lots of theories on the origin of madeleine, but I won’t bore you with them.

I think what I’m rather taken with is the fact that this man seems to have had his finger in a number of culinary pots. I am jealous that, because of his stature, he was able to influence the tastes of a country which was then becoming famous for its food– a country that wasn’t even his.

Of course in the 18th Century, anyone of note was aching to have their cooks invent dishes to be named for them. Think Sauce Richelieu or Sue Anne Nivens’ favorite, Veal Prince Orloff.

Give me the days when an old Polish king could wander into France, have a bit of cake and say, “Oh, let’s call this a madeleine.” Perhaps his French wasn’t good enough to say “I would very much like one of those delicious, buttery cakes with the faint whiff of lemon.” It doesn’t really matter. One says “madeleine” and one knows exactly what one is getting.

And to that I say, “Dziekuje, Stanislaw.” Thank you. You’ve given me an idea. I shall start naming everything I eat. Sadly, the best name I’ve come up with for anything lately is Chicken Statutory, which is an Americanized version of Chicken Cacciatore, but made with younger, fresher chicken.

I think it needs a little work.

I write about food and am very fond of Edward Gorey. And gin.
View all posts by Michael Procopio →
This entry was posted in Celebrities, Rants and Stories and tagged baba au rhum, french food, madeleines, Stanislaw Leszczynski. Bookmark the permalink.