Hamantaschen: Over my head

Happy (post-) Purim. I should have written this post last week but, frankly, I forgot all about Purim this year. I’m not good with dates. And I’m not a Jew, though I have been told many times by Jewish friends that I am, in fact, Jew-ish.

And that makes me exceptionally happy.

Now, I bet you are wondering, “Why the photo of the lady with the enormous décolletage and the even more enormous hat? What on earth does it have to do with Purim or those delicious, Purim-related delicacies, Hamantaschen?”

Nine years ago this month, I had never even heard of Purim until a received a phone call from my friend Tricia.

“Are you free tonight?” she asked. “Want to go to a Purim party?”

I said yes, of course. And then I asked, “What the hell is a Purim party?”

She admitted that she really had no idea. As a Mexican-Scottish agnostic, she wasn’t exactly up on Jewish religious tradition. Her fiancé was, however, in his second year of Rabbinical school and she was boning up on her holidays. She told me that, unlike Yom Kippur, this was one of the fun holidays, where people dressed up, ate, drank, and made a lot of noise. Being rather good at all of the above, I became rather excited about it– especially when she told me we needed to go in costume.

I had approximately six hours to come up with costumes for the two of us to attend a party at a temple in which I’d never been, celebrating a holiday I never knew existed. I did a little research, called her back and said, “Just show up here at six in a black turtleneck.”

For those of you who still don’t know what Purim is about, let me explain as briefly as possible.

Purim is a rather joyous holiday– one celebrating the Jews’ deliverance from extermination by the King of Persia’s evil advisor, Haman. Haman despised the Jews because of their otherness– they refused to bow to him, the king, or anyone but their own God.

Fortunately, the king’s favorite wife, Esther (who was the adopted daughter of Mordecai, a man who once saved the the king by revealing a plot against his life) was a Jew, though closeted at the request of her father. When Esther learned of Haman’s plans to exterminate her people, she revealed herself as a Jew and argued that, should Haman have his way, both she (his favorite wife) and Mordecai (his savior) would be murdered as a result. Tables were turned, Haman was himself killed, and the Jews were allowed to exact reprisals upon Haman’s people– essentially freeing themselves from their famous Babylonian Captivity.

It’s amazing how freeing coming out of the closet can be, whatever one’s secret. In this case, quite literally.

Oh, It Needs a Hat

I was at a loss as to what to wear to the party. How many Esthers, Mordecais, and Hamans would show up? I imagined people with a poor grasp on historical costuming showing up in togas or basic burlap. Thanks to a little time and Googling, I came across several recipes for Purim cookies, or Hamantaschen, which are supposed to represent Haman’s hat or, as some would argue, ears.

As a literal-minded man who loves to put things on his head, I found the notion of making a hat-inspired cookie into a cookie-inspired hat rather delicious. I spent the rest of the afternoon making giant Hamantaschen headwear.

Dressed as The Hamantaschen Twins, Tricia and I were a hit at Temple Sha’ar Zahav. After the noise-making and game show-themed events, the evening culminated in costume judging. We came in second place, much to our delight, beating out the less-inspiring costumes and, inexplicably, a woman wearing a giant vagina suit. I have since blotted from my memory the costume which stole our thunder.

We celebrated by strolling into the Castro wearing our hats. Most of the people on the street looked at us with utter confusion. A few people, however, smiled and gave us the thumbs up sign. “Jews,” we thought, “They dig us.”

We settled into a bar table at Harvey’s, where I drank my first, second, third, fourth, and last ever Lemon Drop. Why? Because we were wearing big hats, that’s why. We chatted up a table of gay softball players next to us. I was rather (unsuccessfully) fixated on one fellow there celebrating his birthday. Tricia was occupied by another, more interesting gentleman. When a drag queen handed us pencils and stapled sheets of copy paper, we realized it was trivia night, so we in our giant hats joined tables and forces with the jocks.

I went home that evening rather high from all the contest-winning and Lemon Drops, but I came away with much more than that– I met one of the best friends I’ve ever had that night chatting and playing trivia games, all the while savoring the time I was able to share with one of my oldest friends– a girl who, at 13, I asked to go to Europe with me as gravely as any other shy boy might ask another girl to go to the prom.

And all thanks to our giant, conversation-starting Hamantaschen hats.

The hat was somewhat worse for wear by the time I gave it to my next door neighbor– a Jew who loved playing dress up more than any straight man I’ve ever met. God only knows whatever became of it. Or him. Fortunately, the friendships are still around, however tattered and frayed by life and stress and distance they may have become at times. They are sometimes shelved, but they are always there. A little more glue or glitter or TLC, and they are as good as new– more durable than any styrofoam, brown paper, and satin that a hot glue gun could ever put together. I’d be a fool to give those two away like I did that damned hat. I don’t care how many cookies you offered me.

In German, the word tasche means pocket, which is essentially what these cookies are all about– there is a pocket made for jams or other pastes like those made of poppy seeds or prunes (lekvar). How they are meant to represent a hat worn by Haman, I have no idea. Three cornered hats were favored by European gentlemen of the 18th Century C.E., not Central Asian ones in the 6th Century B.C.E.. The European Jews of the 18th Century may not have had much of a knack for historically-appropriate head gear, but they did come up with a rather delicious cookie.

While trawling for recipes, I landed on the one that sounded the most delicious (to me)– that of a certain, very, very popular food blogger who shall not be cited here. There was something about her non-traditional use of both butter and (especially) cream cheese in the dough that told me these were the ones to bake.

They didn’t turn out so well. 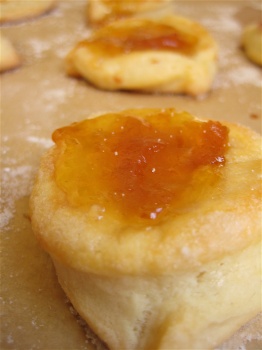 While they were as delicious and tender as I suspected they would be, I followed the recipe too blindly as I am wont to do whenever I bake anything new. I should have read all the comments attatched to the post before my baking venture to get a little more insight. For example, the dough should have been rolled more thinly, too much jam (even for this jam lover) in the center, the oven temperature was not high enough, and the baking time, which was suggested at 20 minutes, was more like 30. Oh, lots of problems, but that is another blog topic altogether Sadly, the walls of these little Jerichos came tumbling down with the weight of all that bubbling confiture. Some of them looked remarkably like gaping wounds. But, like I said, they tasted rather good.

Of course, it could have been my own, simple lameness. But I very much doubt it.

I should have stayed with Mark Bittman.

I write about food and am very fond of Edward Gorey. And gin.
View all posts by Michael Procopio →
This entry was posted in Rants and Stories, Sweets and the Like and tagged friends, hamantaschen, hats, purim. Bookmark the permalink.

4 Responses to Hamantaschen: Over my head