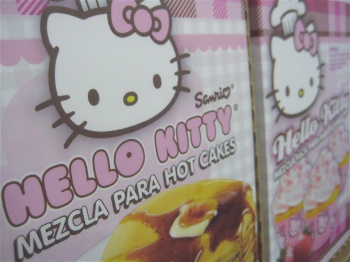 The National Association for the Specialty Food Trade put on their 34th Winter Fancy Food Show this week, allowing for exhibitors from around the world to do precisely that– exhibit themselves. Thousands of vendors and merchants descended upon the Moscone Center in San Francisco from January 18 to January 20th for a fancy food frenzy.

I’m not sure I would agree with the term “fancy”– it’s always been a troubling word . As a noun, the word “fancy” connotes a liking formed by caprice rather than reason. As a transitive verb, it is an action of mistaken belief, of pure imagination. As an adjective, which is how, in this case, it is applied, the word suggests that the food exhibited at the show is “of particular excellence or highest grade.”

It is, naturally, open to interpretation. Much of the food– the hundreds of olive oils, cheeses, and cured meats, for example, are just that– excellent and of the highest grade. But does this term also apply to the likes of, say, Fartless Chili and frozen pizza? Perhaps. Perhaps not. It is simply a matter of prejudice. Yet products were snatched up by buyers from France to Fresno.

Since this was my second food show, I was able to learn from my previous mistakes, which included: feeling obligated to try everything, trying to see everything, and making actual eye contact with vendors while wearing a press badge. Armed with experience, I was able to roam the floors with a vague, pleasant eye that managed to avoid the dull and zero in on what was, to me, at least, of interest.

The following are a few of the more interesting items found at the Fancy Food Show. They are selected according to my own delights and prejudices. Since this was an international event, I gave no preference to the local, which is my normal custom. Some of the products are odd, others unfortunate, while others are just plain good. Enjoy.

When I first arrived at the show on Sunday, a woman in the press room gave me a few suggestions for booths to visit. One of those was Brent’s of Napa Valley, where I got my morning off to a good start with their Firey (sic) Beer Brittle, made with Red Tail Ale, Spanish peanuts, and chile de arbol as the key ingredients. 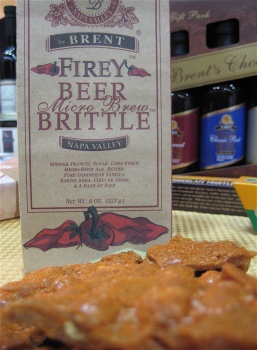 I was determined not to spend my day candy-sampling as I had done before with unfortunate results. I stuck to my vow of avoiding the hundreds of cracker and olive oil offerings and stick with what was new, interesting. Faltering only occasionally at a cheese counter that gave up samples of Wensleydale. Three times.

I did, however, feel bound to visit the Vosges Chocolate booth to sample the suggested Enchanted Mushroom bar, made with Reishi mushrooms. While the chocolate was excellent, I had forgotten that I had been granted permission to photograph the product the previous day by a kind woman, but neglected to remind the staff of this matter. My fault. But the Harpy that descended upon me at my re-appearance turned the pleasant chocolate-umami taste in my mouth bitter. So no photo. What I never have understood about this convention is that these vendors are here to exhibit their goods. There’s no hiding at an exhibition, no magic Keebler Elf-like factory, so why are some people so guarded? I decided there was too much to see and do without worrying about it too much. I mentally flipped the gorgon the bird, but reminded myself to be extra careful about taking photographs in the future.

On with the show… 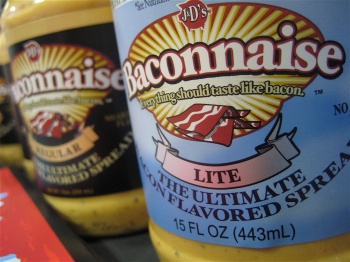 A very enjoyable booth– perhaps, one of the highlights of the show for me– was the one belonging to Bacon Salt, home of Baconnaise and, incredibly, Baconnaise Lite. The pleasant irony of all their bacon-related offerings is that there is no bacon involved in the making of any of their products. And that they are, in fact, vegetarian. This is typically not my style of food. Fake anything has no general appeal, but oh, their give-away bacon-flavored lip balm. They gave me two. I think what I was so taken with was the good-guy frat boy feel I got from the creators. And I mean that in the best sense. The Fancy Food Show is, in its own way, a fraternity of food vendors. Nowhere was the party atmosphere thicker than at their booth. They even asked me if I wanted one of them to put on the bacon suit hiding under the front table so that I might have a photo taken with it. The hospitality industry, in my opinion, at its best. 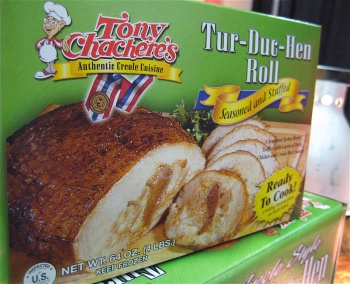 My next notable stop was at the Tur-Duc-Hen booth. I’d never had the much-blogged-and-Twittered-about holiday fad food, nor had I ever had any real desire to. Not being much of a coprophage, I find it difficult to imagine that any food beginning with the letters t-u-r-d could be much good. Sean Timberlake of Hedonia remarked, upon my mentioning the product, something akin to “Great, they’ve managed to take three birds and turn them into one, flavorless dish.” I could not have agreed more. 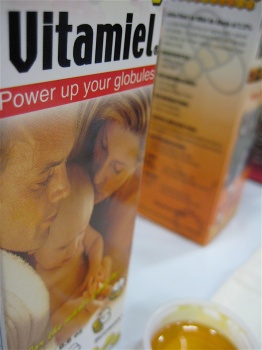 With all the sugar, processed food, and unnaturally-formed proteins already ingested, I needed a bit of gustatory help. Fortunately, I found myself in front of the Seis Natural booth, with their bee bread, royal jelly, and Aguijon– a libido-increasing, honey-fueled sex potion. Intrigued by the bee bread, but not wanting to increase my sex drive at a gigantic food show, I sampled the Vitamiel, which promised to “power up my globules.” It tasted of honey, of course, but contained a difficult-to-describe acidity which balanced the sweetness. Perhaps it was the mere power of suggestion, but I found that my globules– especially the ones I never knew I had– were indeed powered. 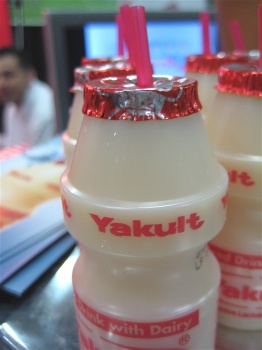 Close by, I was offered a daily dose of Yakult from Japan. I had accepted the sample expecting some drinkable yogurt made from yak’s milk, but what I got was a jolt of about 8 billion pro-biotic bacteria swimming around in a surprisingly delicious, tangy, citrus yogurt drink. I mentally set them to work on the tur-duc-hen.

One more reason to love Japan was the discovery of Hello Kitty pancake (pictured in the top photo), brownie, and cupcake mixes. All in Spanish. Much to my disappointment, the vendors explained that their current licensing extends to Mexico, but not, as yet, to the United States. So for those of us looking to add a little kawaii to our mornings, we’ll just have to wait a little longer. 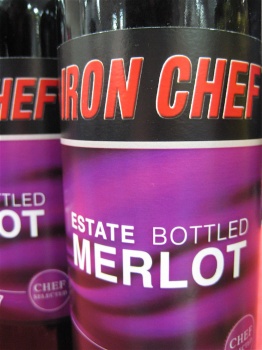 Among the more personally irritating offerings at the food show was the Iron Chef wine collection. The wines are produced in Italy, a country with a reputation for creating some of the most sought-after wines in the world. And some of of the worst plonk. Though Iron Chef wine, at least the Sangiovese I tasted, would not fit neatly into either category, I would place it closer to the latter than the former. To me, it is marketing at it’s worst. And don’t get me started on the packaging.

After two afternoons of wandering, talking, and tasting, of witnessing the abandonment of one plus-sized, bearded, Lark-bound food celebrity for another, younger, more mobile one with a penchant for orange, my feet ached and my globules were fading. Fast. I had seen enough good, bad, and, for the most part, boring food products to last me the rest of the year. I would have given anything for a smart, new cocktail on offer, but I couldn’t find one, though I know they must have been around somewhere. I was just too brain dead to put the effort into navigating a map.

As I began to make my way out of the North Hall of Moscone Center, I spied a little stand– nothing of special interest at first glance. Natural Directions Organic. The banner suspended above the booth promised, “All Natural, All Organic, All The Time.” They sold sparking, organic juice. What caught my attention was the woman standing beneath the sign. She was, to put it bluntly, anything but natural. If she was the representative of natural direction, I felt the company had taken some unfortunate turn of the highway several miles back and had gotten hopelessly lost. From a distance, I could just make out the swollen shape of her collagened lips saying a little something to a prospective customer. As she smiled, her forehead remained motionless– as stiff as the naval captain’s cap she wore at a cocky angle over her bleached-blonde hair. She was, at the very least, fancy.

I moved closer to her, wanting to make certain she was, in fact, a real woman. As tired as I was, I felt the need to find out if she was a drag queen, which would have been a stroke of ironic marketing brilliance, in my opinion. I chatted her up a bit, asking about the products she was selling because I wanted to hear her speak. As I did, I looked into her eyes. Or, rather, just above them, to the false eyelashes that had been put on at an angle almost as jaunty as her hat. She suggested I try the pomegranate soda.”That’s the best one, if you ask me,” she confided. “It tastes even better with a little vodka in it.”

“Well, what doesn’t?” was the best I could reply.

And then it hit me– this woman, who a mere five seconds prior I had viewed as oddly unreal, was, in fact, the most honest person I had encountered at the show. Not that the others were especially dishonest. It was simply that all I had heard from people for two exhausting days were talking points about the greatness of their products, which was understandable, given the venue. But here was this wonderful woman– suddenly lovely in my eyes– who decided to tell it like it was. It was just the refreshment I needed.

Pity there was no vodka.

As a little, value-added extra, please watch this video on the true meaning of “fancy.”