Posted on December 5, 2008 by Michael Procopio 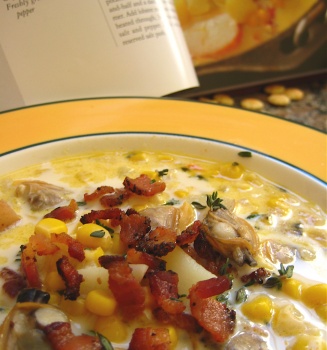 I’ve had chowder on the brain ever since I attended a rally a couple of weeks ago at which I mistook the crowd’s chant of “Louder! Louder!” as– thanks to people blowing horns into my ears– “Chowder! Chowder!” I was teased about it by a friend of mine (the proud owner of two hearing aids, no less) who leaned over to me afterward to say, “All this heat and talk of marriage is making me crave a hot, milk-based soup.”

Sometimes, we hear what we want to hear.

I’ve been craving it ever since. Chowder, not marriage, I mean. Popping around the corner to Swan’s Oyster Depot is easier said than done, thanks to the usual line several eaters-deep on any given day. I don’t want it from a can– that’s too I’m-a-single-man-living-alone pathetic for my tastes. I’d hate to have anyone find the can in my garbage, because I have a reputation to protect. Since no one has offered me a steaming bowl of the stuff lately, nor is anyone on the horizon likely to, I knew I would have to make it myself.

There are any number of chowders to choose from. New England, Manhattan or Shrimp Chowder from the Gulf Coast? There are chowders made with oysters, with clams, lobster, crab, fish, and even corn. Thin and milky, or thick and creamy? There are as many types of chowder as there are people who make it. No two chowders are the same. There is not one particular recipe that defines the word, no matter what you might hear to the contrary. I have the feeling one could put Rice Krispies in a bowl with some potato, salt pork, and milk, heat it up and still get away with calling it a chowder, however the people of the North Atlantic Coast of this continent might complain.

The word “chowder” is most likely derived from the chaudière, the three-legged pot or cauldron in which it was cooked, in various forms, all along the Atlantic Coast of France in the centuries prior to European colonization of America.. Others might claim that the word is the bastard child of the Old English jowter, or fishmonger. I vote for chaudière, because I am, at heart, a francophile.

Coincidentally, Atlantic Seaboard-residing, pre-Columbian Native Americans made their own form of chowder which the early English colonists were initially hesitant to latch onto, since they seemed as mistrustful of shellfish as they were of just about everything else. Preferring bivalves to starvation, early settlers added their old standbys of ship biscuit and salt pork to the pot. The rest is, I believe, history. 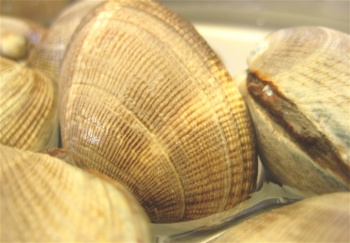 Corn and Clam Chowder with Bacon

Since just about anything is fair game, in terms of chowder-making, I decided to combine two of my favorites, just to see how things went. A lobster chowder sounded wonderful, but too expensive. Crab, which was local, was at about $30.00 per pound. No thank you. I found some lovely Manila clams, which were not exactly local, but neither were they from Manila. The price was good, so I took them home in a little net bag with the thought of steaming them to death in the near future.

I love corn chowders, too, and anything with bacon it. I thought I’d throw all of these things in my own, legless chaudière and see what happened. The results were excellent. Nothing earth shattering but, then again, I have no plans to change the world by virtue of chowder making. Still, I am pleased.

The various amounts of ingredients are approximate, since I was just letting both the creative and clam juices flow. I neglected to write everything down.

2 cups fresh or canned yellow corn kernels, depending upon the season.

1 cup half and half

pinch of pimenton, or cayenne pepper

salt and pepper to taste

This entry was posted in Uncategorized and tagged chowder, clam and corn chowder, recipe. Bookmark the permalink.

Leave a Reply to JAY in Los Angeles Cancel reply