The Birthday Cake: Make a wish and blow. 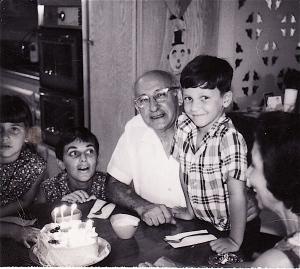 I am entering into high birthday season. Not only my own, but about half of the people I know. We’re Summer babies– the product of cold-weather snuggling and perhaps a little too much Holiday Cheer. I suspect that my own conception had something to do with Nixon’s 1968 presidential victory. I shudder, yet I am grateful. And, as I type this, I realize that today is the 100th anniversary of my paternal grandmother’s birth (the smiling profile at the lower right of the photo, eleven months before I was born). Of course, she hasn’t been celebrating it herself for some years, which isn’t surprising– she’s dead.

When I hit the one-year mark, my mother (Mia Farrow-circa-Rosemary’s Baby haircut, second left) thought it would be a fun idea to have a joint birthday party for myself and my grandmother, since our birthdays were so close together. The birthday cake read “Happy birthday Mom and Michael!” I’m sure I was delighted with the cake, as I am sure there are photos of me with icing smeared all over my face and body. My grandmother, however, was not. “Don’t ever do that again” was all she said. She didn’t enjoy having her special day shared, nor did she like the fact that her birthday wishes would be diluted by those of a small, frog-like newcomer who frequently soiled his onesies.

And I don’t blame her one bit. On average (unless you happen to be someone who enjoys multiple birthday parties), you get one shot a year at your own cake and birthday wish. That thought makes me weep for all the twins and triplets in the world.

So where and when did this dessert become imbued with the power to single out one’s specialness, grant wishes, and divide families?

What an excellent question.

The Birth of the Birthday Cake

Both the Greeks and the Germans lay claim to inventing the birthday cake. Of course, the Greeks claim to have invented everything, so I’m not surprised.

In Ancient Greece, flat, round cakes of honey and nut meats called plakous were given in offering to the moon goddess Artemis on her special day of celebration– the world’s first Moon Pie, if you will.

The Romans, as was their habit, adopted this Greek custom, but latinized the cake’s name to placenta and expanded upon the idea of annual celebrations. Whereas the Greeks had limited their cake offerings to the gods, the Romans took a shining to the idea of the birthday, celebrating those belonging to their Emperor-du-jour and his family, to important military heroes, even to one’s own city. One’s 50th year is said to have been celebrated with a cake make of flour, cheese, honey, and olive oil. Placenta, delicious placenta.

Of course, neither the Greeks nor the Romans bothered to come up with a new word for cake, since little distinction was made between these cakes and bread.

No, it is rumored that our word for cake is derived from a 13th Century Norse word: kaka. Cake, it would seem, was in need of a greater marketing strategy.

It was the Germans who really put the concept of the modern birthday cake on the map. In the Middle Ages, sweetened bread dough was made into the shape of the Baby Jesus wrapped in swaddling clothes and eaten cannibalistically on that biggest of all birthdays, Christmas. I am reminded of the story a friend once told me of how his family celebrates that holiday every year. His mother walks into the dining room carrying a peppermint-frosted birthday cake (because Jesus loves both you and peppermint) and everyone bursts into a rousing rendition of “Happy Birthday”. Not, I hope, “Happy Birthday, Jesus”.

Mercifully, the idea of a bready Christ-child lost some of its appeal, but the tie-in of child + birthday = celebration survived in the form of the Kinderfest— a child’s birthday party. In centuries past, it was usually the custom to regard children as either mini-grown-ups, free sources of labour, or simply not at all, since it was most likely that he or she would not survive into adulthood. It was the Germans, with their proto-modern Geburtstagtorten, who helped to pioneer the warm and fuzzy regard with which we now treat the young. At least our own. And the birthday cake.

It’s impossible to talk about birthday cakes without regarding their source of power– the birthday candle.

Fire is, of course, a source of both light and heat. It is therefore symbolic of the sun’s power and, as such, the use of it in religious rights is not at all surprising. The smoke from these fires — from candles or burnt sacrifices– would rise, curling its way up to Heaven, to whichever god one was worshipping at the time. The Greeks sometimes placed candles upon their cakes, as they did with Artemis, and lit them as they prayed. With the round cakes glowing like the moon, they sent their prayers skyward with the smoke. It is essentially that tradition we still follow, though we no longer call them prayers, but wishes, which sounds less religious, yet more unreasonably hopeful, and we light up German Chocolate or Wacky Cakes instead of Moon Pies, because that somehow seems more comfortable to us.

We place the same number of candles on our cakes as the number of years we have lived but, no matter how many candles there might be, we get just one wish. The more candles on the cake, the more difficult it is to blow them out in a single breath, as is the wish-making custom. If anything, this symbolizes not only the complexities of aging, but the growing unlikelihood of our ever getting what we wish for. For the young, the act of blowing out candles is one of hope. For the elderly, it can be an exercise in frustration and futility, which might explain why my family stops counting candles for someone when their age exceeds the number of candles in a standard box– 24.

Whatever you might read into the tone of this post, I am not completely cynical about the birthday cake, its traditions, and its powers. I don’t believe so much in the making of wishes by blowing out candles, though I enjoy the symbolism behind the act. The real power of the birthday cake comes from the fact that, if it is made from scratch, it tells the recipient that he or she has been thought of in advance, is loved.

And, of course, I love the fact that I, as the birthday boy, am essentially coating the entire surface of the cake with a fine mist of my own spittle, sharing a little bit of myself with all my co-celebrants. It’s better to give than to receive, you know. That’s why this year, I shall joyfully close my eyes, put my lips together, and blow.

I write about food and am very fond of Edward Gorey. And gin.
View all posts by Michael Procopio →
This entry was posted in Holidays, Rants and Stories, Sweets and the Like and tagged birthday cake, birthdays, history of birthday cake.. Bookmark the permalink.

3 Responses to The Birthday Cake: Make a wish and blow.