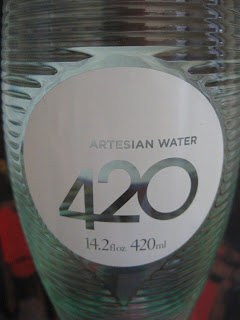 Several months ago, our local bottled water purveyor brought two executives from Pellegrino into our restaurant for dinner. As they sat at the bar digesting their meals with alcohol and animated chatter, I stopped by to say hello.

“Have you seen our new product?” the rep asked as she pulled a plastic bottle of water from her bag. “We’re very excited about it.”

I held the bottle, noted to myself how good it felt in my hand, and gave a silent nod to a condom advertisement tag line I had read in an adult magazine I should not have been looking at as a child. “Ribbed, for her pleasure.” What I enjoyed more than the grippy, pleasure-giving texture of the bottle was its name: 420.

420? Were they serious? I pictured the Pellegrino executives as heavy pot smokers; lighting up, ties loosened, and calling each other “dude” or whatever the Italian equivalent would be. I said nothing, but failed in my attempt to stifle a bit of inappropriate laughter.

“What’s so funny?” she asked, puzzled. I wiped the smirk from my face and, as seriously as I could, asked one of the pezzi grossi, “Tell me, what made you decide to name this water ‘420’?”

“I like the way the numbers look. The ‘4’ looks like an ‘h’, as in ‘h20’,” he responded, quite proud of his Northern Italian sense of design. Did I have the heart to tell him?

Of course I did.

For those of you not in the know or pretending not to be, “420” is shorthand for marijuana. The term is believed to have originated in the early 1970’s at San Rafael High School, where a group of teenagers would meet after school at 4:20 p.m. around a statue of Louis Pasteur to smoke marijuana. Given their extra-curricular activities, I very much doubt they were mindful enough of Pasteur’s Germ Theory to engage in thorough hand-washing prior to their illegal activity.

How this tradition became widely accepted is unknown to me apart from the fact that, when stoned, people seem to think just about anything is a good idea. Whatever the case, the tradition spread and today April 20th is a day of much celebration and binge-snacking throughout the nation, though somewhat on the sly.

I explained all of this to the surprised and unsmiling Pellegrino people. For extra measure, I dug myself a slightly deeper hole by telling them that their product might be perceived as luxury bong water, but that this wasn’t necessarily a bad thing, since they would have a built-in sub-culture market.

Then, after explaining to them what a bong was, I thanked them for the bottle and went back to waiting on my tables.

Had I just just come across the liquid equivalent of the Chevy Nova? There are far worse examples, certainly.

Recently, while cleaning my desk (where the bottle has been used as a paperweight/ conversation piece), I noticed a website address printed on the back of the water bottle, www.fineh2o.com…

“Luxury by the liter.” For some reason, I had hoped they might have translated that to “by the ounce”, if only for their American market.

Clicking for more information about 420, I was informed that this water comes from the Southern Alps of New Zealand and was deposited when my “great, great grandmother was the same age as [me]. Which is a fabulous story to tell someone [I’m] trying to pick up in a bar.”

I somehow doubt any of my great, great grandmothers were concerning themselves with luxury water. Unless one considers irrigating crops a luxury. They were too busy occupying themselves with things like crossing over from Spain to marry into Sicilian crime families and not assimilating well into white culture, preferring to sleep on bearskin rugs with trappers in Montana who were not their husbands.

And if I were to pick up anyone in a bar, I most likely wouldn’t be talking about water, let alone drinking it. But that’s just me.

Another fascinating brand of water from Fine H2O is Heartsease, from Wales, where the Heartsease Pansy grows. Since “heartsease” is two letters away from heart disease, I would hesitate to drink it, no matter how cute the pansies are. I think I’m just a little surprised that these two unfortunately named products come from essentially Anglophone countries.

I admit that I am no water snob. Apart from an extreme loathing of Chicago tap water, which tastes of exhausted Zebra Mussels, I am happy to drink from the local tap– especially ours in San Francisco. I do, of course, realize that there are differences in the flavors and textures of water from various sources– rainwater vs. spring water, etc.– I’m simply too occupied with other things to pay these differences much mind. I left such things to my brother who, on one occasion, spent an entire day at Vichy running around the various fountains excitedly sampling every type of h2o he could find, while the invalids who flocked there to take the waters for their health sat around with graduated beakers waiting to take sips in measured amounts at appointed intervals. He even brought home water from Lourdes in a plastic Virgin Mary-shaped bottle to be enjoyed later. Given current airline restrictions pertaining to liquids, I wonder if the good people at that holy shrine have adapted to the times with a 3 oz. version of Our Lady. Perhaps the local priests might go so far as to bless the clear Ziploc bags in which she must now travel. That would be a nice touch.

I have not seen the Pellegrino representative in our restaurant since that evening. I would like to assume that she was allowed to keep her job, since she wasn’t the one responsible for naming the water. Of course, the Pellegrino people evidently don’t care about the alternative meaning behind their water’s branding. Not enough to change it, anyway. I’m rather glad. I was so disappointed when Coors abandoned their Spanish translated slogan of “Turn It Loose” once it was learned that the phrase was read by their Mexican market as “Suffer From Diarrhea”. Montezuma, it seems, was finally taking his revenge.

To purchase a case of 420 for your next social event, call 1-888-24-WATER or email them at info@fineh2o.com. Just please don’t tell them I sent you.