The Cupcake: Through a Frosting, Darkly

Posted on February 26, 2009 by Michael Procopio 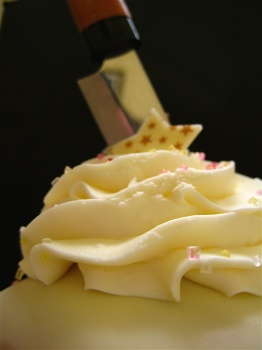 I have always been mildly troubled by cupcakes. I understand their immediate attraction– they’re cute, individual packages of utensil-free eating. It’s cake on-the-go for busy people who like such things. I had once thought they were adorable for children’s parties, but I am no longer convinced.

I simply don’t care for them. Not that they aren’t occasionally delicious. I just don’t like what they represent.

Or, to be marginally fair: what they represent to me.

But first, a history in brief of the dear, too-much-beloved cupcake.

The name “cupcake” is derived from its method of measurement, though it is also argued that these treats were often baked in cups or smaller baking tins in the 19th Century, when oven-baking was done with wood fires, which had the bad habit of making the production of larger, more substantial cakes subject to uneven cooking and burning.

Rather than weighing ingredients, the cupcake was born of measuring by volume and a need for easy counting, thanks to non-universal literacy rates:

Essentially, the cupcake was created as a helpful recipe for the illiterate, the bad bakers of the world, or both.

Cute in a Cup

To me, cute is only appealing if there is some element of menace behind it, much like sweetness needs a pinch of salt to prevent it from becoming cloying or insipid. Puppies, which are smaller versions of solid, dependable dogs are cute, but they are unpredictable, sad-eyed creatures capable of terrible destruction at any given moment. Shirley Temple may have been a saccharine mega-star in her six year-old prime and the smaller version of the sober, serious U.S. Ambassador to both Ghana and Czechoslovakia Shirley Temple Black, but she has earned her place in my heart by playing edgier roles in her even-more-youthful career (read: as a four year-old): a knife-wielding tot, a French chanteuse/ hootchie-cootchie dancer, a negligée-wearing temptress hired to corrupt the integrity of newly-elected politicians.

Cupcakes are, of course, smaller versions of proper-sized baked goods. There is nothing edgy or unpredictable or interesting about them. They are salivated over by children and squealed at by women who tend to moisten at the approach of anything adorable.

And they’re destroying our country.

At least, I think they are. 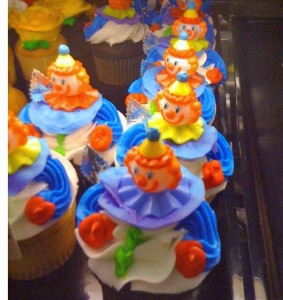 I’ve been thinking about the cupcake ever since a newlywed couple hosted their nuptial dinner at my restaurant. The bride was a depressing control-freak who didn’t for one moment seem to be enjoying herself at her own wedding, unsmiling except when posing for photographs. The new husband was obliging, obedient, and wore a bewildered look on his face, especially when posing for photographs.

The wedding “cake” was comprised of three tiers of cupcakes monogrammed with the bride’s and groom’s’ initials. One bloated, over-sized cupcake sat on top. I stared at the cakes for a moment, feeling mildly disgusted and uneasy about the couple’s future.

And then Doug, one of my co-workers, hit on what was bothering me when he grumbled that this bridal couple just didn’t get it, that cupcakes are individual items, unsharable; that dividing up a true cake would have symbolized the couple’s desire to share their happiness with their guests. I went back to look at the bride and groom. They sat alone, facing each other at a tiny square table, while guests and family sat apart from them at larger, round ones. I felt a little depressed.

Cupcakes are, by nature, considered separate but equal confections. There is no question, as in the sub-division of a large cake, as to who receives a frosting rose, who gets a corner piece, who gets a bigger or smaller slice. They are all, more or less, similar to one another. They are dismally egalitarian.

Each bite of a cupcake is designed to be similar to the next. It is a relatively mindless process. With a slice of layer cake, however, there is inner negotiation, which is part of the joy of eating one. Does one eat the frosted outer edge first, or save it for last, or does one move back and forth between them?

This is, perhaps, why I no longer think cupcakes are such a good idea for children’s parties. While the allure of their convenience might be attractive to harried parents (and what parent in their right mind doesn’t look for a shortcut here and there?), cupcakes teach children nothing about how life really works: negotiation (I’ll trade you my frosting rose for your corner piece), disappointment (why did I get such a small piece?), hierarchy (Why did she get a better piece? Is it because her mommy is my daddy’s boss?), or, most importantly, sharing (You want some more frosting? Here, have some of mine.). They are, sadly, one of the many indications of the modern parent’s tendency towards protecting children from anything “unpleasant”. 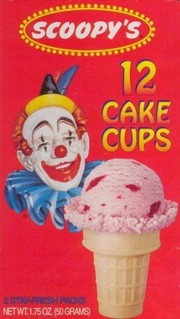 Perhaps my first experience with birthday cupcakes left a bad taste in my mouth. A girl, who I shall call “Karen” (because that is her real name), was given a special 6th birthday party in our kindergarten class. Her mother was our ever-present teacher’s aide. For the special event, Karen’s mother had baked cupcakes into Scoopy’s ice cream cones, which technically would, I suppose, make them cone cakes. Karen’s was, unsurprisingly, more elaborate than the other cupcakes. Her name was even embossed on the cone. The rest of us got random names, none of which matched.

It is more than likely possible that I was jealous of the fact that, since Karen’s birthday fell within the school year and had a mother in a position of influence among the kindergarten-teaching set, she could be singled out for specialness, just as she was often awarded the title of “Wake-up Fairy”, which was bestowed upon the best napper in class on any given day. I was a lousy napper and never allowed to play that particular rôle.

So it was with the most satisfying touch of schadenfreude, that I witnessed the birthday girl bite off the tip of her tongue as she tucked into her special cupcake. The rest of us were shocked into silence when she screamed, the blood pooling over the frosting of her dessert as she opened her mouth to cry and dripping down the white apron-front of her party dress.

By high school, Karen was running around with the Heavy Metal crowd and, I believe, referring to herself as a “headbanger”. I’ve often wondered if that first taste of blood-tinged frosting influenced her future tastes. I’m not saying, I’m just saying.

I Knew You Were Coming 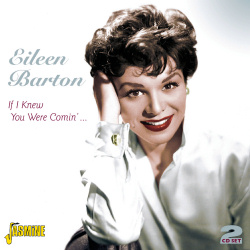 A birthday is a very special event, as is a wedding, or a much-anticipated visit from a loved one. To bake a cake in honor of someone is to tell them you esteem them sufficiently to make a gift of your time. Not so with the cupcake. It is diminuitive and, therefore, all sentiment is automatically diminished. Had Eileen Barton, for example, sung “If I Knew You Were Comin’, I’d’ve Baked a Cupcake”, the meaning would have been lessened to almost pointlessness– a sort of, “oh, hey. Welcome. Just put your stuff over there and we’ll unfold the couch when I’m off the phone.” Cupcakes are too quotidian to illicit as much good will as a full cake, no matter what their biggest fans might tell you.

Recently, when Googling the word “cupcake”, I came across this rather provocative quote:

“America is an enormous cupcake in the middle of millions of starving people.” — Gloria Steinem

I’m sure anyone could have a field day with this statement. “One cupcake, indivisible,” was my first thought. Cupcakes are a symbol of, if not independence, then individuality. America is seen as a place where freedom of expression is encouraged. The cupcake is not self-sufficient, it takes several ingredients and the efforts of a baker, for example, to create it. It is, however, self-contained– it stands alone, apart, and, in its paper wrapper, symbolizes our modern obsession with hygiene. A perfect, if heavy-handed metaphor for a nation that has historically preferred isolation and individual freedoms to full engagement and, say, universal health care.

Is it any big surprise that the popularity of the cupcake wildly increased dring Bush’s years in the White House? Interesting.

I won’t even get into what those millions of starving people of the world might think of us. Some of it’s good, some of it’s rather unpleasant. I do not, however, wish for them to think of us as an unengaging, selfish little cupcake. If our history teaches us anything, it’s that we are quick learners. We can’t go it alone. We need to share with our friends and bribe new allies with frosting roses. Perhaps if we kick this annoying little cupcake habit and turn instead to sharing larger baked goods that are, by nature and necessity, broader in their world view, we all might just all get along.

Oh, who am I kidding? But it would be a nice start.

Back to Shirley Temple. As the black lingerie-clad temptress-for-hire Polly Tix, she slinks and vamps her way into the new-in-town senator’s heart. How does she entice him into selling his soul?

An enormous cake, that’s how. Not some silly little version thereof. The woman meant business.

I write about food and am very fond of Edward Gorey. And gin.
View all posts by Michael Procopio →
This entry was posted in Celebrities, Rants and Stories, Stage, Film, and Television and tagged cupcakes, politics, shirley temple. Bookmark the permalink.

3 Responses to The Cupcake: Through a Frosting, Darkly